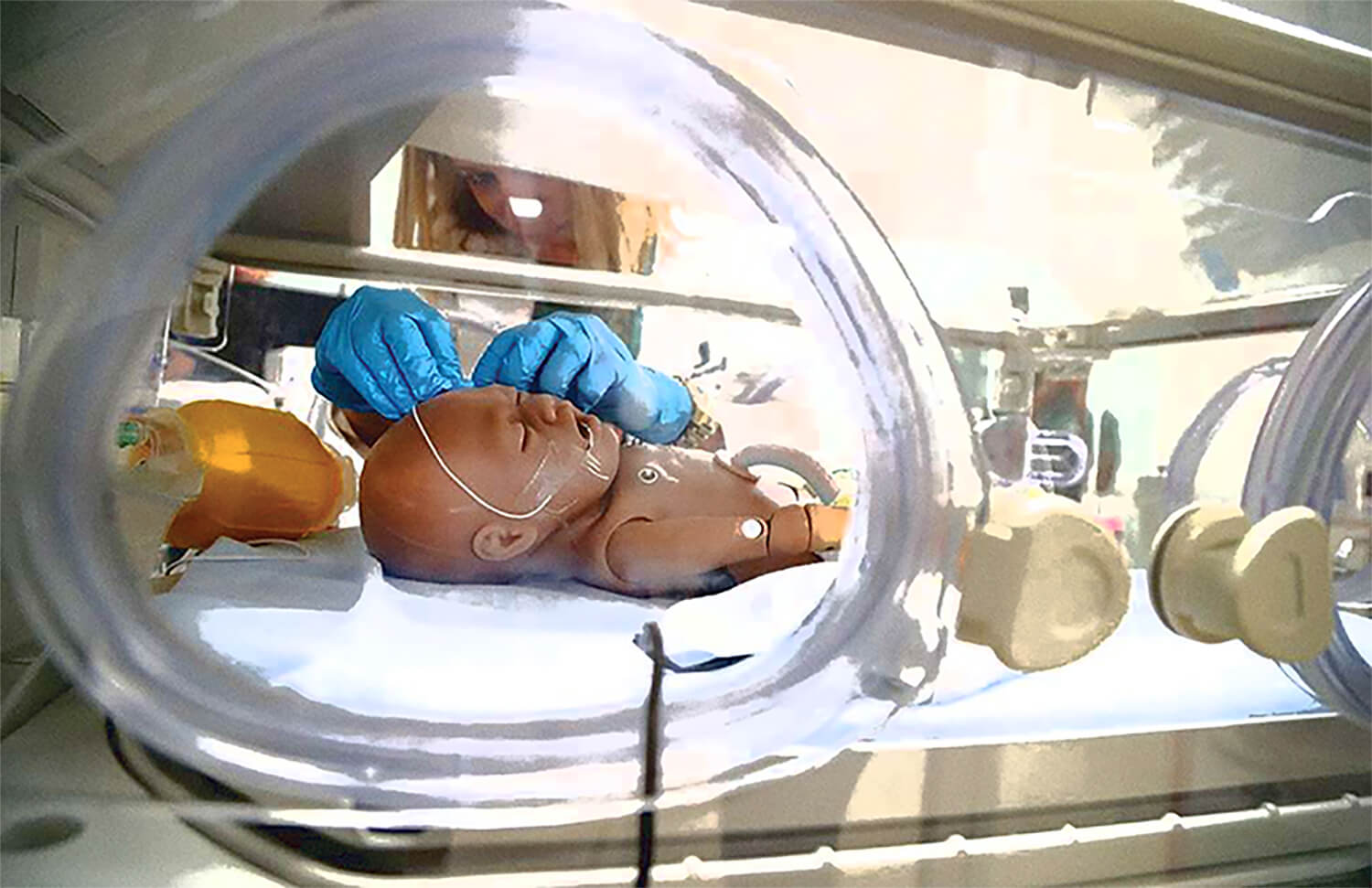 Implanting devices in the brain to reduce the effects of Parkinson’s disease, making life-saving tourniquets available to average people, and educating students in the health sciences with lifelike mannequins are only a few of the featured stories in the latest installment of our series, “Innovations in Health Care.”

Stop the bleeding; save a life

If bystanders at the Marjory Stoneman Douglas High School shooting had been trained to stop bleeding, some lives might have been saved, says physician Igor Nichiporenko, trauma director at Broward Health North, where some victims were transported.

“Uncontrolled bleeding is the No. 1 cause of preventable death in a trauma,” Nichiporenko says.

An initiative called “Stop the Bleed” aims to educate the public on how to stanch blood loss, including by the use of tourniquets.

To help, Broward Health has purchased blood-loss kits and plans to make them available to the public. “A lot of cities will be rolling out programs to make them available,” says Kelly Keys, manager of Broward Health’s Emergency Preparedness Department. The kits, which include a tourniquet, a chest seal, QuickClot, and a pressure bandage, will be installed in large public access areas.

A way to see your doctor

You wake up feeling lousy, but your primary care doctor doesn’t have an appointment until late next week.

Here’s a better scenario: you call Epic MD, a telehealth company. Within minutes you can speak to a doctor and get prescriptions sent to your pharmacy.

“Twenty-nine days is the average time for someone to get into a doctor’s office in the United States,” says Epic MD president Jack Karabees.

His company’s technology allows doctors to access patients’ medical history and communicate with them via phone, video and computer in a fashion compliant with federal privacy laws. Cost is $29 a month for unlimited consultations, or pay-per-use.

“Specific lesions of the prostate, especially very small ones, cannot always be captured by ultrasound due to its poor resolution,” says urologist David Taub. “Moreover, ultrasound targets the peripheral areas of the gland and can miss a material percentage of cancers located in the front, midline and top portions of it.”

But with the MRI/TRUS fusion technique, a patient with elevated prostate-specific antigen levels undergoes an MRI scan, which effectively reveals details in soft tissue. Radiologists review the scans and identify suspicious areas.

Later, in an outpatient procedure, an ultrasound probe examines the prostate, and software overlays the MRI images, which provides 3-D views of the gland. These fused images guide precise placement of biopsy needles.

“I liken the [use] of the technology to using a GPS to reach your destination, rather than going with an old-fashioned map,” Taub says.

Boca Raton Regional Hospital is the first in Florida, and only one of five centers nationwide, to noninvasively map irregular heartbeats in patients with chronic atrial fibrillation and other arrhythmias.

“The technology allows mapping of certain arrhythmias with high accuracy prior to entering the cath lab so that the entire procedure can be planned before touching the patient,” says physician Murray Rosenbaum, director of electrophysiology at the hospital’s Christine E. Lynn Heart & Vascular Institute.

This technology offers a chance to stop when no other treatment is effective, including cases where initial ablation has failed, he says.

Palm Beach Gardens Medical Center is the first hospital in Florida to perform heart ablations with the HeartLight Endoscopic Ablation System. The visually guided laser balloon lets physicians see within the heart and, for the first time, pinpoint and treat the cause of atrial fibrillation at the source. So far, more than 4,000 patients with AFib have been successfully treated with the system.

“This therapy will have significant benefits for those suffering from A-fib,” says Dianne Goldenberg, CEO at Palm Beach Gardens Medical Center.” This technology will help those in our community who are dealing with this disease and allow them to have a more productive and active life.”

A new tool in the fight against heart disease

“This shaves off some of the calcium. It drills the calcium off the plaque. We can put a stent in with much better results,” he says. “The times we needed it, we have had a tremendous success rate.”

Some patients have been able to avoid bypass surgery.

“This technology and the availability of this procedure will have significant benefits for those suffering from peripheral artery disease,” Ricotta says.

PAD is a disease of blood vessels outside the heart that commonly affects arteries carrying blood to the legs.

“A thousand of these waves converge on one point,” says Maurice R. Ferre, CEO and chairman of Insightec, a global company with an office in Miami.

Sperling Medical Group in Delray Beach uses it for neurological conditions, and University Health in Boca Raton uses it for women’s health.

The U.S. Food and Drug Administration has approved it for movement disorders, and it has been found to be effective against benign tremors.

An alternative way to treat seizures

For some patients with seizures, medication does not always work. However, doctors at Baptist Hospital in Miami have a new tool called a responsive neurostimulation device, which is implanted in the brain to reduce seizures.

“It senses abnormal activity in the brain, and sends out an electrical impulse,” says neurologist Alberto Pinzon. “It responds to what is happening in the brain. It recognizes electrical patterns in your brain.”

The small device is implanted in the skull, adjacent to the brain. It identifies unusual brain activity that can cause seizures, and, within milliseconds, sends out impulses to normalize brainwaves before a seizure can occur.

Pinzon says the 20 to 30 percent of patients with a seizure disorder not responsive to medication are candidates for the device.

“Parkinson’s is a movement disorder where the ‘brain machinery’ stops working,” Sporrer says. “There’s a lack of dopamine, and your movement becomes rigid.”

Often, Parkinson’s patients are given medication to replace the dopamine, but that can lead to too much involuntary body movement.

It is not recommended for advanced stages of Parkinson’s, but Sporrer says DBS allows patients to have relatively stable dopamine levels and rely on less medication.

Bioidentical hormones have their name for a good reason: They’re naturally occurring and are chemically identical to hormones produced in the human body, says Carolyn Zaumeyer, an advanced registered nurse practitioner. “They’re made from plant and animal products,” she says.

She says there’s little risk of negative side effects, because “you’re just giving the body back what it used to have.”

Each year, 806,000 medical articles are published, says Steven G. Ullmann, director of the University of Miami’s Center for Health Sector Management and Policy.

“There’s no way for a doctor to keep up with that,” he says.

“That’s where artificial intelligence comes in. It can pick up new methodologies and very significant changes. When your doctor says, ‘Don’t worry; I’ve been doing this procedure for 30 years,’ that’s when you should worry. A doctor’s eyes are only so good at picking up stuff.”

Artificial intelligence is only an aid in diagnosis and treatment, Ullmann says. “AI uses data other doctors have observed and reported, and doctors can tailor-make not only a diagnosis but a treatment plan.”

He points to IBM’s Watson as an example of AI combined with machine learning.

“IBM Watson is able to take into account the 800,000-plus medical articles that come out every year,” Ullmann says. The IBM system can answer a physician’s questions and suggest diagnoses and current treatments.

A unique approach to an age-old problem

The company’s founder and CEO, Alan J. Bauman, is one of only a small number of physicians worldwide certified by the American Board of Hair Restoration Surgery. “I have always believed that one of my main responsibilities is to find the latest and most effective options that will help yield the best possible patient results, while also making their time with us as comfortable and enjoyable as possible,” he says.

Bauman offers video consultations for clients via smartphones, tablets or PCs. “This means that men and women looking for help with hair loss can start their hair restoration journey by having a private session with me, from the comfort and privacy of their own home,” he says.

Using sports as a motivating tool for the disabled

Sometimes, finding ways to motivate those with debilitating injuries or illness can be difficult. However, former professional football player Ray Shipman has found a way.

Shipman, who played linebacker for the NFL’s New Orleans Saints, is now director of the Adaptive Sports and Recreation Program for the Memorial Rehabilitation Institute, part of the Memorial Healthcare System.

The program uses recreational sports to inspire and motivate those who have been dealt some of life’s harshest blows—such as traumatic brain or spinal cord injuries, lost limbs, gunshot wounds and strokes.

Shipman starts by visiting patients in Memorial’s rehab department. “You build a rapport with them,” he says.

And what was his proudest accomplishment? “When our wheelchair basketball team finished No. 2 in the country. It took perseverance to keep competing at such a high level of competition.”

Students at the University of Miami’s School of Nursing and Health Studies can say they’re practically honing their patient skills at a hospital, because the school’s Simulation Hospital so closely mimics the real thing.

The five-story, 40,000-square-foot building is designed to have the look and feel of a complete, birth-to-death, full-service hospital, says Susana Barroso-Fernandez, assistant professor of clinical and simulation director.

The facility has a mock intensive care unit, delivery rooms and even an outpatient clinic. Students work on full-bodied mannequins with elaborate computer programs designed to mimic real patients. The mannequins can provide medical histories as well as exhibit symptoms of an impairment students have to diagnose and treat. “It’s an amazing teaching tool when done correctly,” Barroso-Fernandez says, adding that the facility will work with

fire-rescue agencies, other allied health professionals and the business community, which can rent space.

Gympass, an international corporate fitness benefit provider, has opened in Miami as part of its U.S. launch.

Says Gympass co-founder and CEO Cesar Carvalho: “We are thrilled to bring Miami into our worldwide network of 5,000 cities in 13 countries and counting.”

Gympass partners with corporations to give employees an affordable gym membership with unlimited access to a global network of more than 30,000 fitness facilities in 13 countries.

Employees typically receive 50 to 70 percent off market prices, and the employer pays for 5 to 10 percent of the total subsidy.

Two large corporate partners in South Florida are slated to come on board later this year.

Cleveland Clinic Florida has opened a new medical office in Wellington and plans to open a new Coral Springs facility in July.

The clinic’s 7,400-square-foot facility is in the Village Green Center, at the corner of Stribling Way and State Road 7. It will offer primary care, gastroenterology, cardiology and other specialty services with 22 examination rooms and physician offices.

Some mistakes can be erased, says Claudio Sorrentino, founder and CEO of Body Details, which specializes in laser removal of hair and unwanted tattoos.

As tattoos grow in popularity, so does regret as people decide their body art no longer means as much as it once did. Sorrentino says nearly two-thirds of people between ages 18 and 44 have ink.

In addition to removing tattoos, Body Details also removes unwanted hair and skin imperfections with a PicoWay laser, the strongest approved by the FDA. It also offers laser skin rejuvenation.

Based in Boca Raton, Body Details has seven South Florida locations and offers a lifetime guarantee on its services.

One of the simulators employed at UM