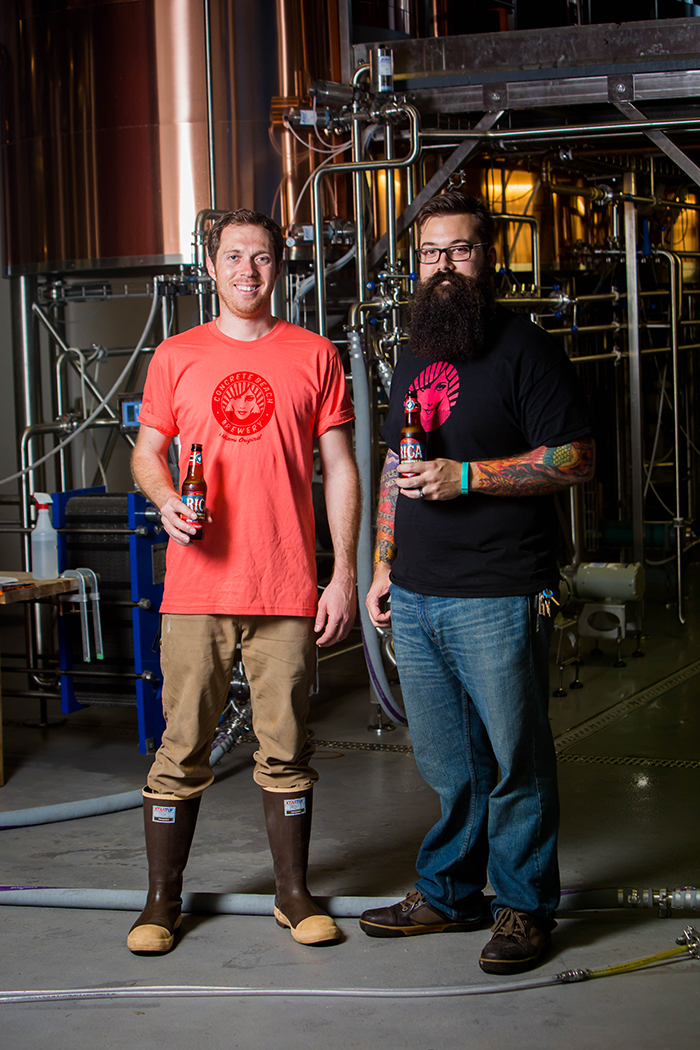 The year 2013 had just begun. Kyle Jones and his friend Joey Farrell were sitting at Tap 42 Craft Beer Bar & Kitchen in Fort Lauderdale. As they were drinking beer, they began shooting different ideas back and forth about starting a business together.

Owning a brewery was one idea that got them excited. That same night, they came up with the name, LauderAle. None of them knew how to brew beer but that didn’t seem to matter. Nearly two years later, the partners” LauderAle is one of South Florida’s hottest craft beer destinations.

“The response has been incredible, overwhelming at times,” Jones said. “Right now, we’re located in the middle of nowhere, the place is hard to find and we don’t advertise. Despite all that, we can barely keep up with consumption. We’re in the process of expanding our production capacity and hope to be ahead of consumption in the very near future, but probably not for long.”

Jones’s success underlines a trend gaining momentum in South Florida. He is part of a growing group of craft beer lovers opening breweries across South Florida and gaining terrain in a market dominated by brands like Corona and Heineken. Like the region’s growing cultural scene, craft breweries are another part of the puzzle in creating a hip vibe in a region that wants to have all the amenities to attract talented professionals.

Currently, the region’s market share of craft beer is slightly below 3 percent. But with breweries opening in different cities and neighborhoods, including Wynwood, Fort Lauderdale and Boynton Beach, the market is expected to grow and expand, says Jesse Morris, the Social Hall director at Concrete Beach Brewery. Morris” brewery is set to open in Miami’s Wynwood neighborhood before summer.

Brewmaster Matt Cox and his wife Laura Cox were expecting Copperpoint Brewing Co. in Boynton Beach to open by May. Matt has been in the South Florida brewing industry for 15 years and has seen customers” appetite for craft beer evolve.

His wife said, “We have seen that the market in Florida is ready to support craft breweries. There is a great market demand for quality craft beer.”

South Florida’s newly discovered passion for microbrews is a reflection of a nationwide trend, where restaurants and bars are increasingly focusing on different types of beer, says Bill McFee, co-owner and Brewmaster at Barrel of Monks Brewing, which was expected to be open before May in Boca Raton.

“While Florida is a bit behind much of the country in the number of craft breweries, they are growing rapidly in number,” McFee said. “Clearly, the public is awakening to the pleasures of beer that has a full flavor as opposed to beer that is meant for mass consumption.”

McFee and co-owners Matthew Saady and Keith DeLoach share a common love of Belgian beer and were enjoying some beers six years ago when they first decided to go into this venture.

“We are all of the age that we needed a project and what better than something you have a passion for,” he said.

Their passion for craft beer hasn’t been curtailed by the amount of capital needed to launch a brewery. The investment can be from a few hundred thousand dollars to many millions, “depending on how much one wishes to spend,” said Alan Newman, co-founder of Alchemy & Science, which owns and operates Concrete Beach Brewery.

Jones was able to get LauderAle started with less than $500,000.

“However, to do it right and go big, it’s a $5 million investment,” he added. “Something we’re working towards now.”

McFee said it would be very difficult to open a brewery of the size of Barrel of Monks for under $1 million.

“The basic brewing equipment alone costs at least half of that amount,” he added.

Copperpoint Brewing plans to buy all North American made equipment, which can be significantly more expensive than other options from Asia or overseas, Laura Cox said, adding the quality is paramount and the equipment would last indefinitely.

Christopher McElveen, general manager of the proposed Wild Oak Artisan Ales in Boynton Beach, said a lot of capital has gone to plans, research, recipes, marketing resources and so on.

“We have spent a lot of our own money growing the brand and have since reached out to potential investors to really begin production,” he said.

To open the doors, it will ultimately cost $200,000, but McElveen said Wild Oak hopes to raise a significant amount of capital from a crowd funding campaign.

Often, some of the challenges these entrepreneurs face have to do with zoning and city permits. That’s caused by a lack of understanding about the nascent industry.

“Microbreweries are relatively new to South Florida and many communities are not sure how to deal with them,” said McFee, who had to do some reassuring about these concerns to the Boca Raton City Council. “They are often concerned about odors and waste.”

McFee was able to move forward with his plans to open Barrel of Monks in Boca Raton after he helped city officials understand the nature of a brewer.

“We had to ask for a sort of zoning variance in that we are both a manufacturing business and have a tasting room that serves the public,” he said. “However, after working diligently to educate our city staff, we found full support of our City Council and got unanimous approval for our project.”

To Laura and Matt Cox, the path to opening Copperpoint Brewing hasn’t been easy.

The “exhaustive process” has taken them almost four years to complete, Laura Cox said. First, they had to find a city that was willing to allow them to open a brewery. “Zoning is a huge challenge,” she said. “Manufacturing and retail are not normally in the same location, so this is a big hurdle to cross with a city. The federal and state licenses are very difficult to acquire. There are very strict regulations for the manufacturing of alcohol.”

To Concrete Beach’s Newman, navigating through the Miami building permitting process “has proven to be far, far more difficult than I ever anticipated.

“Wild Oak’s McElveen said the biggest challenge has been trying to find the right space.

“We need about a 3,000 square foot building with a good r-value [insulation] and an HVAC system,” he said. “The floors must be solid concrete so we can have trench drains installed, and we will have to put in mezzanines and coolers. We don’t need a lot of room really, but the building has to be laid out well.”

But whatever challenges they have to overcome, it is almost forgotten when the brewery opens and beer enthusiasts start arriving. To some, the neighborhood brewery becomes a second home, or at least, that’s what Jones wants LauderAle to be.

Kyle Jones of LauderAle tells how his beer is made:

There are four traditional ingredients used to make beer: Water, barley, hops and yeast. We crush the barley using a mill, some flour-like material along with pieces the size of coarsely ground coffee.

We heat up water that has been modified with salts, minerals, acids and bases and add the grain. We mash (mashing is like steeping coffee or tea) the grains for about an hour at temperatures between 145 degrees and 160 degrees. During this process, the starch in the grain is being converted to short (simple) or long (complex) chain sugars.

Once there is no more starch left to convert to sugar we separate the grain from the liquid using a strainer and transfer it to the boil kettle. We add the hops in the boil kettle, boil for an hour then cool the liquid, now called wort.

The wort is transferred into stainless steel conical fermenters via pumps and hoses and yeast is added. The yeast eats the sugar we made and the byproduct is alcohol.