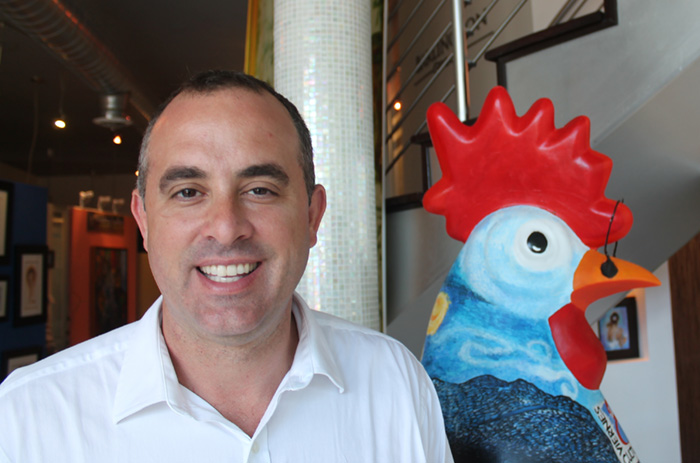 Redevelopment in Miami has radiated outward from Brickell Avenue to downtown, Overtown, Midtown and the Design District. Now it seems to be Little Havana’s turn.

The neighborhood’s Calle Ocho (Eighth Street) long has been a tourist destination as the symbol of Miami’s Cuban culture, but it’s gaining a new round of hip places that attract visitors and locals alike. It’s all about making old properties cool again, as Wynwood has done, rather than tearing down and starting over.

A key player is the Barlington Group, which is led by Martin Pinilla II and Bill Fuller. It partners with retailers and has a portfolio of 35 commercial properties in Miami with Little Havana at its core. The principals have earned credibility from local residents for helping create Miami hot spots Blackbird Ordinary and Ball & Chain.

Barlington’s headquarters is on the second floor of Futurama, a creative workspace with 12 artist studios and five offices, at 1635 SW Eighth St.

Fuller and Pinilla started Barlington Group in 2004 to acquire small properties and combine them into larger tracts of land for development. Just east of Little Havana, they are limited partners in Blackbird Ordinary, 729 SW First Ave., which has positioned itself as a purveyor of craft cocktails in the Brickell area, and Toasted Bagelry and Deli, 83 SW Eighth St.

Across the street from Toasted, Barlington has a contract for a three-story, 45,564-square-foot office building. It plans to spend $45 million to acquire it and turn it into retail and restaurant space.

At 1030 SW Eighth St., Barlington is a partner in Brickell Mattress, which has a WiFi coffee bar and a loft-like look.

Fuller and partners Zack and Ben Bush in 2014 fostered the rebirth of Ball & Chain, a live-music venue and lounge at 1513 SW Eighth St. It’s at the center of the Little Havana tourist area, which had a steady stream of visitors on a recent afternoon.

Southwest Eighth Street, which is also U.S. Highway 41, was one of the original entry points into Miami via the Tamiami Trail that crossed the Everglades. It had a small downtown area by the 1930s.

The Ball & Chain was a notable gambling house in the 1930s and 1940s and a performance venue for African-American artists in the 1950s, according to an account on its website. It turned into the Copa Bar in 1958, just before Cubans fleeing Fidel Castro created Little Havana.

Little Havana has endured some tough times, though. For example, the Futurama furniture store took over the Copa space in the late 1960s but closed in the 1990s. Fuller bought the shuttered building in 2007. After a $1 million transformation, the reborn Ball & Chain combines a Depression-era flavor with a Latin vibe. Music spills out to the sidewalk from the stage at the front of the bar. There’s another stage that looks like a big pineapple in the back yard.

In the block just east of Ball & Chain, Barlington has bought the 1920s-era Tower Hotel at 1450 SW Seventh St., with a $2.5 million renovation in the works.

The hotel adds another important layer to the neighborhood, Pinilla says. “The hotel adds a unique product to our commercial portfolio that will act as a magnet for tourists who want to understand Little Havana like the locals. In turn, these tourists will be spending more time here, and more of their money in Little Havana’s stores and restaurants, helping it thrive for years to come.”

Among the new wave of businesses are Azucar Ice Cream Co., Guayaba y Chocolate and a modern take on the neighborhood’s cigar-rolling heritage, the Little Havana Cigar Factory.

Fuller says the neighborhood has been able to attract tenants that become destinations for the city’s urban core in general. “It’s amazing to see someone come into the neighborhood for a meeting and the next day see them with their friends or family,” he says.

Barlington helped found the Little Havana Merchant Alliance and there’s a steering committee to organize a business improvement district, with a vote expected in January.

The city is working on the streetscape along Calle Ocho, and Fuller points out the location for a pedestrian promenade on 15th Avenue between Seventh and Eighth streets. “For the first time in years we are seeing real dollars invested by the city in Calle Ocho,” he says.

The Miami Trolley now has a Little Havana route, which connects to the Brickell Metrorail Station. That’s provides an easy way to get to Little Havana’s Viernes Culturales, a street festival held the last Friday of each month, as well as the annual Calle Ocho Street Festival.

Ball & Chain has been resurrected as a live performance venue

Barlington is working on a project at 1549 SW Eighth St., next to Ball & Chain, that will bring more new restaurants. Among them is John LaMarket UrbanGrill, a charcoal burger concept from Venezuela, and Union Beer Store, a concept by David and Cici Rodriguez, who started the Miami Brew Bus tours.

Barlington Group is “selectively choosing the tenants that will add up to the best overall neighborhood rather than maximizing profit in one particular instance,” says developer Andrew Frey, who works with it as a consultant.

Barlington has the benefit of a low-cost basis on some of its property, which was as low as $50 during the recession. Fuller says $100 a square foot is more typical now. Barlington paid a premium of about $600 a square foot, or $2.2 million, for a house and 3,000-square-foot-retail center next to Ball & Chain.

In the heart of the tourism area, retail leases are $30 to $35 a square foot triple net, Fuller says. Outside of that, rates can be as low as $15.

Little Havana has a high residential density – 21,117 people per square mile, compared with 11,708 in the city in general. Sellers might be sensing the change in the neighborhood more rapidly than it’s happening. The average median listing price is $299,000, but the median sales price is $187,000, according to Realtor.com.

Many streets are lined with low-rise walkups. Fuller says he has seen a few instances of multi-family buyers gutting the interiors of 1920s-era buildings and being able to get high rents.

Frey, who has his own development company, called Tecela, broke ground in June for what he calls the Miami version of a New York brownstone. The eight units in two buildings will range from 614-square-foot studios to 1,211-square-foot two-bedroom spaces.

The project, at 769 NW First St., doesn’t include on-site parking. Frey, who is also an attorney and adjunct professor at the University of Miami School of Architecture, helped persuade the Miami City Commission to adopt zoning that allows development of small apartment units without a parking requirement in some areas served by mass transit. His project is just a block north of Flagler Street, which has two bus routes. Two Metrorail stations are a half-mile away.

In many ways, Little Havana, which historically has used on-street parking, is a model for modern urban development. Walkscore.com gives it a score of 87 for walkability, the second highest of any neighborhood in the city. ↵

Location: West of Interstate 95 and south of the Miami River to Southwest 13th Street and Northwest 27th Avenue