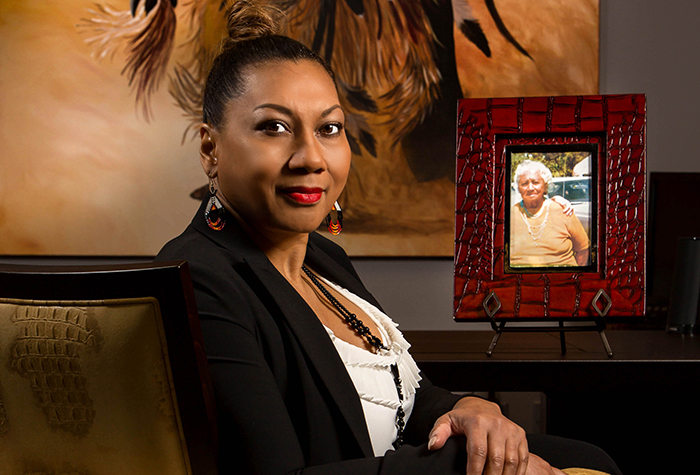 The Wings of Success

S.R. Tommie is steeped in Florida’s history, but her business is thoroughly modern

By Kevin Gale and Levi Rickert | Photos by Larry Wood

S.R. Tommie’s life and family are a bridge from Florida’s rich Native American heritage to cutting-edge marketing in the digital era.

Her great-grandmother escaped as a prisoner during the Seminole Wars in 1858; her grandmother use to scold her if she spoke in English; and Tommie herself grew up in a migrant camp, eventually spending nearly 26 years in Seminole Tribe of Florida’s tribal government. For 10 years, she saved the stipend paid to tribal shareholders to launch Redline Media Group, which has provided creative advertising services to blue-chip clients such as Hard Rock, HBO, Staples Center, Madison Square Garden, Kia, Harley-Davidson and Nike.

Redline has a sleek, state-of-the-art workplace, with a large saltwater fish tank in the lobby, blown-glass chandeliers, a Zen garden and a studio with a cyclorama wall that’s big enough to drive vehicles in for photo and video shoots.

Tommie also has a love of Native American art and owns Chupco Indian Art Gallery in Hollywood. The gallery is named in honor of her grandmother; chupco is a Seminole Creek word meaning “long” or “tall.”

The Seminole Tribe of Florida has a particularly rich history in the state. It fought the federal government in a series of three wars over roughly 40 years, ending in 1858, and was never conquered.

Tommie’s great-grandmother, Polly Parker, is a key figure in that history. According to oral histories passed down by tribal members, Parker was among 163 captured Seminoles that were on a boat from the Tampa Bay area to the Mississippi River as part of the “Voyage of Tears” relocation effort. Known for her ability to find herbs for medicine, Parker went ashore during a refueling stop in the Panhandle, accompanied by a guard and about 12 tribal members. She is credited with giving a signal that led to the successful escape of about six of them, according to an account in the St. Petersburg Times headlined, “Polly Parker’s escape gave life to Florida’s Seminole Tribe.” She then made an arduous journey back to the Lake Okeechobee area and helped repopulate the devastated tribe. Tommie says she has run into an amazing number of people who say Parker was their great-grandmother, too.

Tommie’s grandmother, Sallie Chupco Tommie, lived in a chickee, a thatched-roof hut. Tommie’s mother, Minnie Tommie, taught her about tribal culture and the language. “She always instilled in me to respect our elders,” Tommie says. “As part of that, I spent my summers with my grandmother and learned the stories and lessons that she was taught by her elders.”

Her grandmother would not allow her to speak English. “She told me, ‘Don’t talk to me in white man’s language,’” Tommie says, adding that she could get smacked for doing so. “This was all in an effort to ensure that I could speak and understand my Seminole Creek language. I hated it then, but I wouldn’t trade those smacks for anything in the world! I know my language and am eager to learn more and more every day.”

Tommie’s mother provided an example of a strong work ethic by working late into the night making Seminole dolls that she sold to help provide for the family, and then fixing breakfast before the family boarded buses to pick crops in the orchards and fields.

Tommie showed moxie early on, too. When her mother bought a car that turned out to be bad, the 11-year-old Tommie called the car dealer, imitated a lawyer, and spelled out the details of Florida’s lemon law. Her mother got a call back and was told to come pick out a new vehicle.

Tommie’s first job with the tribe was covering for the receptionist during the lunch hour. How did that lead to success? “I did my job with pride and honor, as if it was the only thing in my life,” she says.

Tommie worked her way up to full time at the Seminole Tribe. While she was pursuing a law degree at Nova Southeastern University, Dr. Barbara Stephenson suggested to her class that they do a community impact project. Tommie came up with the idea of doing a talk show titled “Inner Circle,” where she would go to the Seminoles’ six reservations and Native American conferences to interview tribal leaders, department leaders and shareholders. Tommie says she thought it was important to bring communications from the inner tribal circle to tribal shareholders in general.

The leaders of Seminole Broadcasting initially told her they did not have the budget for it. Tommie told them she would do it for free for six months to prove herself. She ended up doing the program for more than seven years. Health, social services and recreation were frequent topics on the show, which ran on a cable access channel on tribal lands.

Eventually, Tommie says she wanted to learn from the broader world, improve her general skills and interact more with those who weren’t part of the tribe, so she took a job at the Club at Emerald Hills. “I learned a lot while working at the country club from a diverse group of people that assisted me in becoming who I am today,” Tommie says.

Tribal leader Mitchell Cypress, who was president of the Seminole Tribe of Florida Inc., its board of directors, and vice chairman of the Seminole Tribe of Florida, the tribal council, hired Tommie back to do public relations in 1994. Her job primarily consisted of sharing the culture, history and traditions of the tribe with those that sought to do business with them.

Tommie created Redline Media Group 13 years ago while still working with the tribe, saying she saw a need to assist tribes in general with creative services. “See the need, fill the need” is one of her mantras.

One of the definitions of a redline is the final version of a document; it indicates how Tommie wanted to position Redline as the final stop for clients’ advertising needs.

Redline’s first pitch was a project for the Ah-Tah-Thi-Ki Seminole Museum. However, Tommie says its representatives were concerned that her rate was so low that the quality might not be there. She won over Museum Director Tina Osceola by offering to do the job for free if the museum did not like the service. Tommie succeeded and was paid. That was the beginning of a long and successful relationship with the museum.

Cima Georgevich, CEO of Redline since 2003, says the project symbolized the type of creative work that Redline does. The materials were important to help get the museum accredited by the Smithsonian.

Too many creative agencies regard their clients as numbers, so Redline strives to be an extension of their businesses, Georgevich says; this allows clients to focus on core business operations.

Redline combines creative and scientific principles, such as the use of color, messaging, imagery and strategic placement, to subconsciously impact consumers.

Redline uses a five-part strategy of learning about clients, brainstorming, collaborating, designing and executing. Some of its campaigns have become iconic in South Florida, such as the “Live the Good Life” campaign for the Seminole Casino Coconut Creek, for which the creative team worked collaboratively with Emre Erkul, senior VP of marketing at Seminole Gaming, to bring the campaign to life.

Redline’s success has allowed it to give back to the community through Memorial Healthcare System and Joe DiMaggio Children’s Hospital. Tommie also started a foundation, Real Meaningful Gestures, which raises money to assist those who are battling cancer.

Tommie’s interest in art led her to open Chupco Indian Art Gallery in 2002. The gallery is online (chupcogallery.com)
and at 3621 N. State Road 7 in Hollywood. It specializes in handcrafted, one-of-a kind items, ranging from a $15,000 painting called “Waterlily Lovers” by Guy LaBree, based on a Seminole legend, to bronze figures of Native Americans, such as medicine men and warriors, including an $18,000 warrior statue by Jim Jackson. There are also more modestly priced fashion items and home decor accents.

Earlier, Tommie had a concept for a business that would combine a car wash and a coffee house. But due to circumstances beyond her control, the idea did not come to fruition as she had hoped.

Tommie talks freely about her spirituality, which mixes Christianity and tribal customs, and says she may not always be happy about the outcome of her endeavors, but she always prays that something suitable will emerge out of every potential opportunity for business. No matter what the outcome is, her faith remains strong.

Symbolically, Tommie envisioned the gallery and found a building filled with debris, cobwebs and even dead animals. It turns out it was a former bird aviary, which was pretty symbolic for a member of the Seminole Tribe’s Bird Clan. Apparently, some things are meant to be. ↵