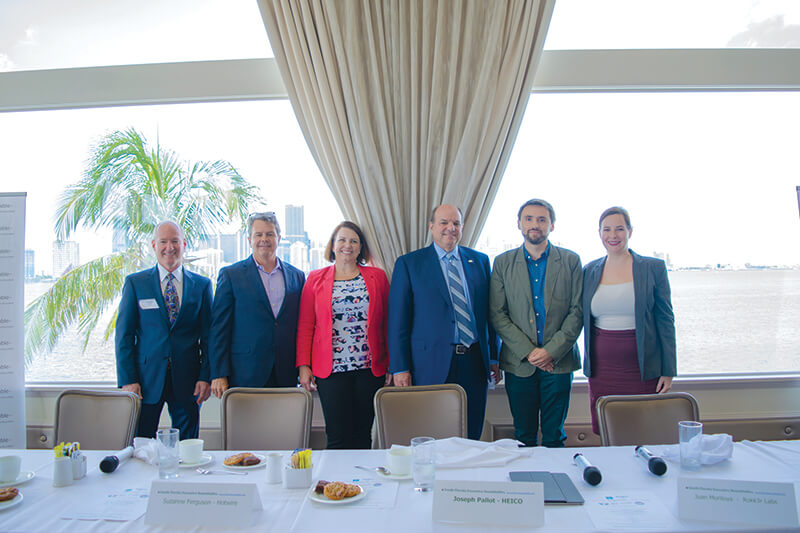 A Bird’s-Eye View from the C-Suite

The June installment of the South Florida Executive Roundtable featured a lively discussion that began with the quest for new talent and rounded out with insights on the most talked-about generation, the millennials.

“I work with a lot of them and you have to teach them to pay their dues before they can get promoted,” said Juan Montoya, co-founder and chief operating officer at Rokk3r Labs, a venture builder and accelerator. “But the one thing that strikes me is that they are driven by a mission and they are really good at things that other older generations weren’t able to do 10, 15 years ago.”

SFBW Associate Editor Andrea Richard moderated the roundtable discussion, which was held at the Rusty Pelican on Key Biscayne. The following transcript has been edited for clarity and brevity.

What’s the role of failure in your organization?

Ferguson: I tell my team every day that I think failure is a great opportunity to learn. We are fortunate enough to have a very smart team of attorneys. We don’t check each other’s work frequently, but when you are at the stage of growth that Hotwire is, mistakes do happen. I think it is important not to beat people up about that; instead, take what you can learn from it and do better next time.

Paul-Hus: We talk about it a lot because we are trying to innovate in defining building wireless in the enterprise space. We are talking to customers around the country, constantly brainstorming on how to deploy into their portfolio of real estate, so we try things from our market strategy. The statement to our sales team is: Fail, but move on. I want our staff to push through the envelope, get through it, and learn because we are trying to define something in what we are doing. I don’t want to spend a lot of time going down the wrong path.

Montoya: Most of the time, we are building something new and early stage, so we expect failure. We see it with some frequency, but the way we attack it is two ways. So, first, we are very much into what we call experiments, so every company that we build, every project, might start with a grandiose vision that could take us into AI [artificial intelligence] and exponential technologies. We start with defining the most important things to test. Those experiments often end in failure, but they don’t end up in the failure of the project itself because they are well-defined. You know what you want to learn from it and you use it. That’s one thing we do often and it’s expected, and as long as the learning is there, as long as the experiments are well-defined, the short-terms are very focused.

And the other thing, obviously, at some point, and because we start so early, failure of the venture itself can happen. In our history, I think it has happened a few times, and we’ve learned every single time. And that is something you live with and something you embrace in your culture and in your partner’s culture, meaning everything can go right for a while and you can still fail.

Pallot: I think for our business it is different. If we are building a subcomponent that’s going to go into a satellite, if it fails, you can’t go and fix it. And in commercial aircraft, obviously none of us would want to get on a plane where there are problems. We recognize that there is failure and there are things to learn. But I think, what’s different about our business model and our industry’s business model, is we try very hard and we spend a lot of money and resources in testing and in quality assurance. When that product is put into operation, hopefully, it doesn’t fail.

Suzanne, technology is not a field known for an overabundance of female CEOs. What’s your perspective on your CEO, Kristin Johnson Karp?

Ferguson: I have tremendous amount of admiration for Kristin. And you’re absolutely right, this is a space where women have been historically underrepresented. But Kristin is as good a CEO that I’ve ever worked for, and we had the opportunity to see her speak at the Women of Tech panel at Emerge Americas recently. She talked about the notable absence of women in the technology field. She raised some really interesting things that I wasn’t aware of. For example, I didn’t know that [actress] Hedy Lamarr had played a role in the development of Wi-Fi, which I found fascinating.

Joe, your company has been recognized 11 years in a row as among one of the most transparent companies in the country for accounting and corporate governance. How have you been able to foster that?

Pallot: From our CEO and everybody in the C-suite and down through the ranks, we are very committed to transparency and operating the business in a way that’s focused on what we think are the most important stakeholders, which are our customers and our team members.

Juan, what does cobuilding mean, and how does it work?

Montoya: Cobuilding, to us, means partnering with entrepreneurs or with existing businesses to transform their ventures. We started by offering services that mitigate risk, and then finding business models to share in the risk. Cobuilding ultimately means helping people with their ideas and bringing them to reality through processes and methodology.

Richard, how did you develop or find a niche as a provider of cellular technology for inside buildings?

Paul-Hus: Initially, purchasing the technology, we were completely focused on the technology and moving it through distributors and we licensed system integrators from around the U.S. That didn’t really work out from a margin perspective the way we wanted, because the support for it was a little bit overwhelming for us. So, the niche that we evolved into now is as a service provider leveraging that technology to get into the spaces and the spaces that seemed to be the lowest-lying fruit for us—so it’s a niche within a niche. Apartments, hotels, condos and anything that can be broken down into small units are the best fit for us. The model going forward is low cap and monthly payments.

SFBW is the exclusive media partner for the executive-level luncheon. For tickets, visit sfexecroundtable.com.♦