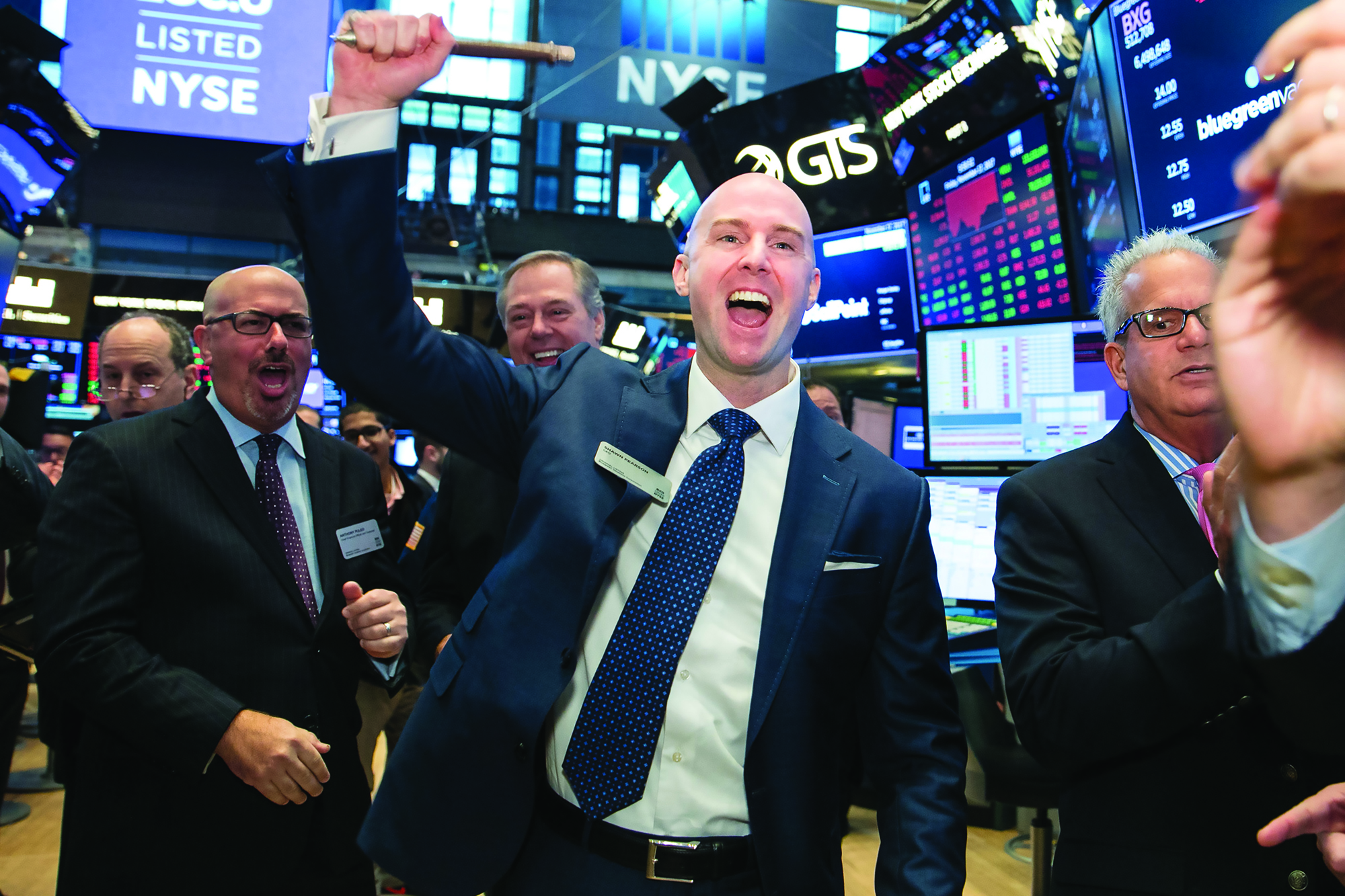 Just how advanced marketing of the timeshare industry is, becomes clear during a visit to Bluegreen Vacations’ headquarters in Boca Raton.

A visitor puts on an Oculus Rift headset and gets an aerial view of an expansive resort in the Missouri Ozarks with families enjoying boating and couples playing golf. Interactive screens show Bluegreen resorts dotting the eastern half of the United States and starting to pop up more in the western half.

The Bluegreen Vacation Club is different than some of the traditional timeshare players. It offers a flexible, points-based, deeded vacation-ownership program that connects approximately 216,000 owners with 69 clubs and club associate resorts. It also provides access to more than 11,100 other hotels and resorts through partnerships and exchange networks.

Bluegreen has evolved from being a public company, being acquired by BBX Capital and then going public again in November 2017 with BBX still retaining majority ownership.

Pearson, who grew up in the Toronto area, says he was fortunate to make Team Canada national baseball team, which played in the world championships at Fenway Park in Boston.

Pearson was an honorable mention freshman All-American at Old Dominion University in 1997 and was an American Baseball Coaches Association All-Region player in 1998. He played the outfield in four A-level franchises in the Toronto Blue Jays’ organization in 2000 and 2001.

At Bluegreen, Pearson leads a company that has evolved from having a heavy emphasis on land development, which was troublesome when the Great Recession hit, to become a pure play vacation resort company. Customers spend an average of $15,000 in their initial purchase of points. They also pay maintenance fees each year.

Bluegreen is one of the more-affordable vacation resort companies and leverages marketing relationships with Bass Pro Shops and Choice Hotels. Shoppers and hotel guests can be offered vacation stays with Bluegreen where they are exposed to the advantages of becoming vacation club members.

Lessons from baseball have played a key role in his approach to business: Constantly improve your craft with determination and perseverance. Pearson notes that if you fail seven out of 10 times at bat in baseball, you can still have a Hall of Fame career.

Pearson also learned the dynamics of teams, saying not everyone should constantly look to make a home run because singles and doubles can also move things along.

He followed in the footsteps of his father and grandfather by earning a business degree—in his case, an MBA from the Ivey Business School at the University of Western Ontario.

From 2002 to 2015, Pearson worked with the Danby Organization, a privately owned group of small appliance companies geared toward the hospitality, retail and government sectors. He held global leadership roles in sales, marketing and supply chain. He became president of Danby Products Ltd. and chairman of Danby Asia.

Pearson spent a little more than a year in Asia and realized that what got the company to its success wasn’t going to ensure it would continue in the era of globalization, so he overhauled the management team.

He used that experience to help identify key issues at Renin, where he was chairman and CEO from 2015 to 2017. He wryly tells how he had a town hall on his first day and somebody whispered that the company had just lost its top account, Lowe’s.

The issues at Renin were more about performance improvement than globalization, he says. Pearson had to look at process improvement and understand consumer pain points better. He engineered a 40 percent turnover in the organization.

The transformation went quickly. In about 10 months, Renin not only had Lowe’s back but was named a vendor of the year.

BBX Chairman and CEO Alan Levan subsequently asked Pearson if he would look at Bluegreen, saying it was a great business in an industry that needed process improvement to turn it into a growth engine. Pearson became a consultant and made recommendations about strategy and growth. Levan then tapped him to run the company.

Pearson says his first priority was to understand the consumer journey, address friction points and understand any disruption in the industry, which was seeing the likes of VRBO (Vacation Rental by Owner) and Airbnb emerge.

“I got really excited on a trip to Charleston because I think this is at the heart of the value proposition of the business,” he says. “I never forget looking at the resort with cobblestone streets, gas-lit lanterns, walking through the resort and seeing how it lays out. Something Bluegreen hadn’t talked about is they are capturing the local flavor of every location they are in.”

Pearson also realized there was an opportunity to provide customers with more experiences, such as advance-booking a guided fishing expedition, getting an urban foodie tour or doing volunteer work.

Unfortunately, Bluegreen had a 40 percent drop in its shares amid market turbulence and after second-quarter earnings, results missed analyst expectations. “We don’t provide guidance. That’s a bit tricky for some of the analysts,” Pearson says.

Bluegreen was in a Securities and Exchange Commission quiet period during SFBW’s interview with Pearson, so he was limited in how much he could say about the company’s share price.

However, Pearson said he and Levan are aligned on strategy: “We are not going to sacrifice earnings per share quarter to quarter for the long-term game.”

That includes marketing to tell why consumers want to choose Bluegreen amid the emergence of VRBO and Airbnb. Pearson sees the upstarts as beneficial to Bluegreen because they get consumers out of the traditional hotel platform and get them use to a condominium or an apartment setting, which is what Bluegreen offers. Bluegreen then can demonstrate consistent standards in its products, cleanliness and experience curation, he says. The ultimate goal is for customers to see Bluegreen destinations as their home away from home, Pearson says. They get to know the staffers at resorts, and vice versa.

Millennials and Generation X are a big part of Bluegreen’s strategy. Millennials like to have shorter duration vacations, which fits well with Bluegreen’s product offerings, Pearson says. Competitors are selling big blocks of time at $30,000, with stays averaging a week to 10 days, while Bluegreen’s customers can come in at $15,000 and stay about 3½ days.

Customers get a bucket of points each year and the number of points for a visit depends on time of year and location. They can buy more points if they want extra stays.

Half of the new revenue at Bluegreen comes from existing customers. New owner growth is a challenge for the industry, with Bluegreen and a competitor growing in that metric, Pearson says. “Marketing costs are lower selling to owners, but we don’t want to sacrifice that for the long-term health of the business model.”

Bluegreen wants more locations in the west and northeast. It entered Texas in April by buying the 165-room Éilan Hotel and Spa in San Antonio. In June, it bought inventory at New York City’s Manhattan Club, where it will assume the management contract in 2021. It has also added a second resort in New Orleans.

Bluegreen has a lot of customers in Texas but lacked in-state accommodations. Bluegreen says 70 percent of its clients drive to its resorts and 85 percent live with in a four-hour drive.

One thorny issue for Bluegreen is dealing with lawyers and marketing firms that encourage buyers to exit their time share deals, which typically involves the financing behind units. Pearson says some unit owners are being manipulated, being asked for money up front and then not getting promised legal services. Bluegreen loses its flexibility to help owners when a suit is filed.