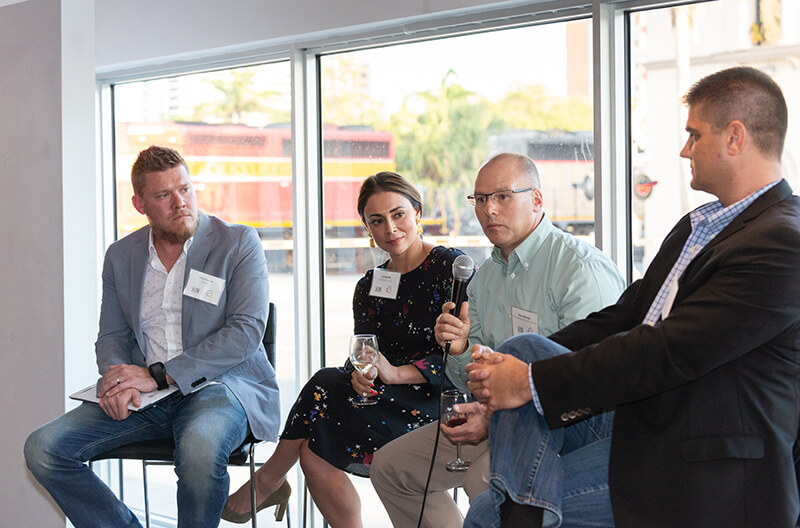 Finding the reality amid the hype

Artificial intelligence is the next big thing that’s already somewhat here, but it can be difficult to tell what’s fanciful and what’s real. Businesses are nervous about being left behind while at the same time AI gets caught up in the debate over privacy.

To help analyze AI, SFBW partnered with Levatas (levatas.com) for an all-star panel. Guests enjoyed wine and appetizers at Wine Scene, 501 Fern St., West Palm Beach, as part of the program. The participants were:

• Craig Stepien, director of digital transformation at NextEra Energy, the parent of Florida Power & Light and the nation’s largest producer of solar and wind energy. Smart meters that provide data five times every hour is one of his projects.

Rashid says AI as an analytical tool will solve one of the big issues of data: “We love data, want more data, but we don’t know what to do with data.” One of her goals is to create things that organizations don’t even know they need until they are created. That allows her to problem-solve, develop and create at the same time.

She playfully compares AI to a beauty pageant. Observers see the appearance of clean teeth and shiny hair, but they don’t see the hair extensions, the plugs and the spray tan “that make her look the way she looks.”

One issue with AI is that it has created buzz, but there has been a mismatch of expectations, she says. The beauty of IBM’s Watson is it was a learning experience, and when you failed, you failed fast. “What you didn’t see was the Wizard of Oz behind the screen.” The reality is that there’s no silver bullet even if people expect that AI “just does things.”

When she showed off the first AI application, the feedback was that it wasn’t glamorous enough.

“We need to do something bigger, faster and better with a wow factor,” she says. “It takes time and there will be a lot of misses and failures. This position needs backbone and not a wishbone. Hope somebody will pat you on the back. … People think everything should just happen.”

AI reflects the best and worst things that happen in technology—a lot of hype and myth. “People don’t realize the amount of funding and effort,” she says. “Some efforts may result in something that has no real utility.”

She notes all the buzz about driverless cars, but the reality is it’s not something companies can use—yet.

Utilities usually are not known for investing a giant amount in technology, which can create a challenge to get funding, Stepien says. Those seeking to implement AI shouldn’t be discouraged by a lack of big funding. “Something that you might not think is a wow factor will strike a chord,” he says.

Machuga broke down about how AI fits in with technology in general: AI is improving how data is interpreted. Augmented reality and virtual reality allow data to be stated in a different way. Blockchain is about securing data. “My job is to figure out how to take these technologies and transform the business. In our new [UTC Center for Intelligent Buildings], part of what we are doing is trying to unveil the unseen,” he says.

Augmented and virtual reality on iPads can help explain to visitors the inner workings of an air conditioning chiller or fire suppression systems. UTC also is taking the same types of technology and applying them to its workforce. For example, the company can take data about how a machine is built and give work instruction through virtual reality about how it should be taken apart and put back together.

The audience at Wine Scene in West Palm Beach

Machine learning can collect hundreds of thousands of data points about thermostats in homes and analyze them with algorithms. Analyzing data helps predict when machines will fail to avoid service outages for a day or two.

“You are hearing a theme, and the theme is data. You can’t have the magic of AI without the underlying data structure,” Nielsen says.

Rashid says data wrangling can be ugly behind the scenes, with quality issues and mismatches. “Oddly enough, no matter how many times and [how much] investment, you are creating a mini-phenomenon. What you think is insight, somebody else may say, ‘We already knew that.’” She says her response is, “Did you know on conventional wisdom? Did you have a gut feel?” That’s probably not good enough when you go to a finance team and don’t have the data to back up your theories.

“What everyone is looking for is the needle in the haystack that couldn’t be found using Excel,” she says. She sees her job as exposing information, but “unless someone takes action on that data, it almost falls flat and fits on a local drive. Data provides insight—that’s about 30 percent. Action is the rest of it.”

Machuga says some people react with fear when presented with analytics that previously took 30 to 40 years of work wisdom to accumulate. It’s also important to find partners before you start presenting data and show a win-win scenario.

“The places I had the most fun are where I could convince someone with conventional wisdom and I have the data skills and we can partner,” he says. “Now, I can quantify it and have a whole generation of people who know that, where previously it took you 30 years to know that.”

A lot of Machuga’s work has to deal with intelligent buildings. For example, an occupant app can help deal with lighting, cooling, heating and running the copy machine.

As far as what AI will be and won’t be, Rashidi is succinct: “I have no frigging clue. It is purely the art of the possible,” she says. It only takes about three weeks of absence from the field to find your knowledge is outdated.

Nielsen doesn’t think AI will replace people. “Not now. Not in 10 years and maybe not longer than that,” he says. “AI in 2018-19 is going to augment our very capable human resources—make them smarter, faster more accurate.”

Some of the outcomes will depend on how engaged businesses are, Machuga says, telling business leaders: “All of this tech is useless unless you guys want to engage with it. Your IT departments are not wizards in and of themselves. You have to engage to figure out how you want to apply it. It will allow businesses to scale differently. Instead of two or three people who understand info because they crunch Excel sheets, you are going to have your entire company understand data. That will give vision so how the people can figure out how to apply tech.”

The challenge for many IT departments is they are so busy putting out fires, supporting and maintain existing operations that they don’t have time to get out of their box.

“The battle and friction come when IT is barely catching up. Brands don’t know what’s supposed to happen in three and five years, and you are trying to create the cool things that are trying to resonate with the company,” Rashid says.

Amid an audience observation about controversy surrounding Facebook and personal data, Rashid notes it’s really not a social media company, it’s a data company. It uses third-party vendors to match basic information, such as first name, last name and email. The third parties try to match social handles to social sentiment. For a cruise line, the question can be as basic as whether someone has cruised with it before.

Machuga notes how Google paid $3 billion for Nest, which is known for high-tech thermostats. “Do you think they wanted to distribute thermostats? They wanted to be in your home. It’s information, so they can offer targeted information.”

Stepien says NextEra wants to avoid something that might lead to the company being perceived as creepily intrusive. “We have an extreme view of not sharing data unless people tell us they want to,” he says. After all, FPL is a regulated utility and customers can’t simply opt out of getting power. Still, one possibility might include telling customers that their air-conditioning costs have risen in recent months, so they might need a repair.

In general, Nielsen expects consumers will be empowered about how their data is used. There will be more opt-ins and opt-outs. People will be able to see the data and control how it’s used a little more. Currently, he says, we’re in the Wild West when it comes to data—or what some might call the bleeding edge.♦