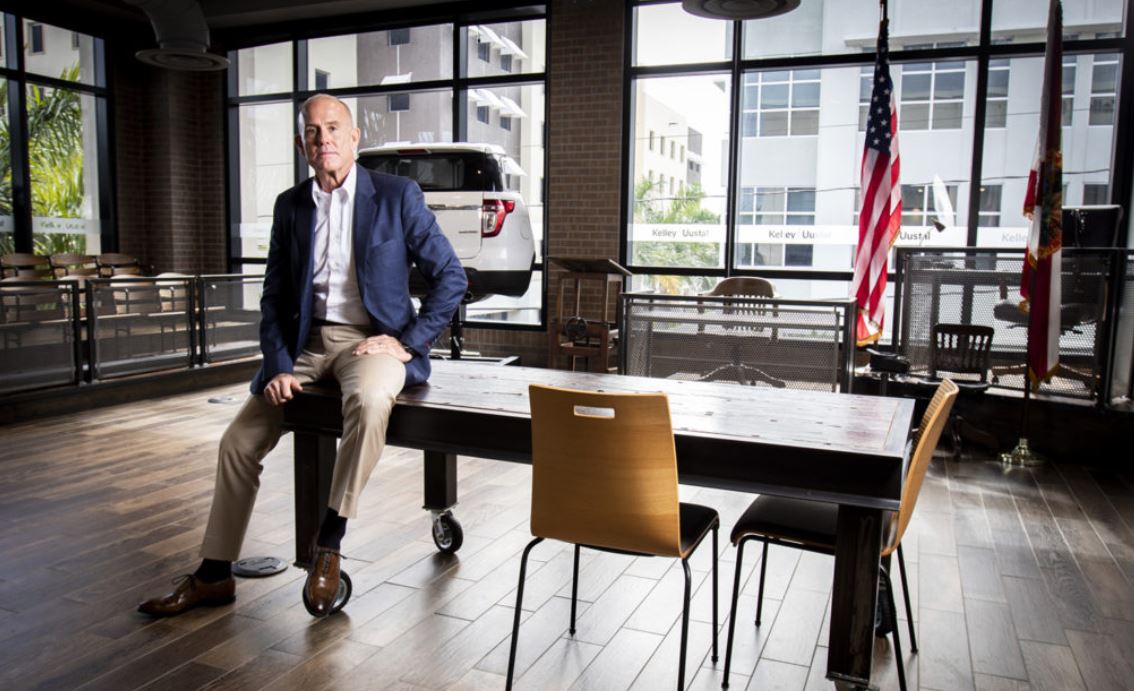 It took only three days of deliberations in May 1998 for a jury to acknowledge the truth about a General Motors car that rolled off the assembly line some 15 years earlier. An additional $4.50 per car would have sufficiently shielded the gas tank of the 1983 Oldsmobile Cutlass Cruiser. Instead, America’s largest automaker decided to play it cheap.

Worse yet, as Broward-based trial lawyer Robert Kelley writes in his Amazon best-seller, The Memorandum, GM would “lie, destroy documents, block testimony and conceal evidence” to hide it.

Kelley, of course, knew none of that in 1991 when a husband and wife from Pembroke Pines walked into his office (referred to as Mike and Catherine Murphy in the book, per a family request not to use their real names) sporting fresh bandages; raw, reddened flesh—and a soul-crushing anguish he’d never before seen during his first decade as a practicing lawyer.

The Murphys not only had lost their 13-year-old son to a low-impact accident that pierced the Cutlass Cruiser’s unprotected gas tank, they watched him suffer. As Kelley writes in the haunting first chapter of the book, “The flames swallowed the car in a roar of fire and heat within seconds. … His hair was on fire. His face had become an unrecognizable mass—the skin blackened, the features burned away. … The boy stumbled toward [his mother], his brand new Keds sneakers flapping as the rubber soles melted away, his braces and teeth bared in a lipless grimace. … Then he fell to the ground. His mouth opened. Blood and steam poured out.”

“When you go through what they went through, your life is never the same,” says the co-founder of Kelley-Uustal. “Anyone who reads the opening chapter and sees what happened that day [in Virginia] on the family’s summer vacation can understand why.”

Though in his rearview mirror, it’s a legal journey that stays with Kelley for reasons both personal (the Murphys remain his close friends) and professional.

The jury famously awarded the Murphys $60 million in damages, an amount that ballooned to $90 million because of interest accumulated during GM’s failed appeal. The CBS-TV show 60 Minutes ran a segment on the case, as did the ABC show 20/20.

Meanwhile, the bulldog persistence of a young lawyer on Kelley’s team named John Uustal, instrumental in unearthing key evidence, later paid dividends of a different kind. Fifteen years ago, the two men joined forces, launching what is now considered one of the most prominent catastrophic injury and wrongful death law firms in the nation.

Kelley reflected on the landmark GM case that prompted The Memorandum, as well as other David-versus-Goliath battles, during an interview inside the practice courtroom that’s part of his firm’s downtown Fort Lauderdale office.

You’ve heard countless stories of pain and loss throughout your years as a wrongful death lawyer. What made this case different?

When [the Murphys] walked into my office, they said, “We’re not the kind of people who believe in suing.” That’s not something you often hear from clients in my business. Most of the people who come in here want to sue, based on things they’ve seen on billboards or on television. These clients came in feeling that something didn’t seem right. They just wanted to find out what really happened.

This is also the only case I’ve ever been involved with—and I’ve been involved with cases [connected to] horrific incidents, like the Parkland shooting [Note: Kelley’s firm is representing five families of victims in the Feb. 14, 2018, shooting at Marjory Stoneman Douglas High School]—where the health care providers [on call at Sentara Norfolk General Hospital in Virginia the day of the accident] had to seek counseling after they treated my clients.

[The wife’s] deposition testimony, which was held in a private courtroom with a bunch of hard-nosed defense lawyers, took everyone’s breath away. The air was just sucked out of that room. Her testimony, to me, always was inspirational. Every morning during the trial, before going to court, I’d read the two or three pages from her deposition to remind me of what the case was about.

It was roughly seven years from the time of the accident to a jury verdict. That’s a long wait with no guaranteed outcome. How did the family handle the stops and starts along the way?

A lot of times, these companies will come in and settle the case confidentially; no one is allowed to know what happened. The Murphys wanted the public to know. They couldn’t be bought off; [that option] was never on the table for them.

They wanted an explanation for why their son burned alive. For why they were so seriously injured. For why the car exploded into flames after a minor impact. That was the driving force behind what brought them to our office. They were hoping that we could provide them with answers.

Beyond the monetary reward, what do you do think that verdict meant to the family?

What did you learn during the case that continued your education as a lawyer?

One of the biggest lessons I learned—and I think the judge learned it, too—was that a lot of times, lawyers on the other side will come to court and say, “We don’t have these documents,” or “These documents don’t exist.” That’s because the corporate client isn’t being forthcoming with [its own lawyers]. So, the lawyers who represent these really big companies are at the mercy of those companies to provide the appropriate information. And those companies cover up a lot of evidence.

So, how does a lawyer who defends clients like yours in the GM case work around that?

You just keep digging. And, hopefully, you get a judge who wants to get to the truth. That’s an important part of the equation. There are judges who are more concerned with clearing their dockets and moving cases along. You want a judge who is focused on trying to discover what really happened and delivering justice to the parties involved.

You had the benefit of perspective in revisiting this case. Were there moments about the journey that struck you differently compared to being in the day-to-day trenches?

I guess I have a bigger perspective on corporate America. Although this particular situation with General Motors’ fuel tanks happened more than 20 years ago, it was only a few years ago when GM had a huge problem with ignition switches—and they were faulted by multiple agencies for the way they handled that, and the number of people who died. It seems to me that a lot of these big companies just don’t care.

The obstruction tactics employed by GM are, as you write, how large corporations often win—by wearing a plaintiff down or bleeding them dry. As cases like this come to light, does it open the door for similar plaintiffs or does it make it more difficult for the next person, because now a parallel big business can seal the cracks in its defense?

Both. When we do work like we did in the GM case, and those documents come out, that helps clients and lawyers across the country—and it actually did in this situation—go to court and get justice. Same thing for us in the cases we tried against the tobacco industry; we benefited from the documents flushed out back in late 1990s that showed fraud and deception by the tobacco industry going back 50 years.

By the same token, companies learn from this. So, they’re more careful about what they put in writing and about who gets those documents.

There’s a common thread that exists in the country today in dealing with companies involved with tobacco, vaping, opioids and pharmaceuticals. There’s so much money to be made. And they will do and say whatever it takes to make that money, even at the expense of human suffering.

Can the accumulation of lawsuit after lawsuit have an effect, or does an entity like the tobacco industry have too many resources?

I flew to Las Vegas recently for our first hearing in our first tobacco case in Nevada. It was me, my associate and paralegal, and a local lawyer. Philip Morris International, R.J. Reynolds, Liggett Group? There must have been 20 lawyers there. From Washington, D.C. From Atlanta. From Charlotte. From Miami. They all flew in for one hearing that lasted less than an hour. That’s what you’re dealing with.

They have unlimited resources; these lawyers are from the largest law firms in the country. That’s the fight that you have to fight. It’s crazy.

Though $90 million was a significant figure at the time, it’s not the kind of settlement that will bring a billion-dollar company like GM to its knees. So, is justice really being served?

Several years ago, in a case against Philip Morris, we got the largest verdict against a tobacco company in the state of Florida—$300 million. A large portion of that was punitive damages by the jury, $240 million, to punish the company.

That sounds like a lot of money to assess against a company. But the jury had heard that Philip Morris—after paying all of its expenses, all of its lawsuits, all of its shareholders, after paying everybody—is still shipping $10 million [of pure profit] each day up to the parent company. That’s a phenomenal amount of money being earned off of addiction and death. And that’s all that company sells; it’s an addictive product, and it’s going to kill you.

These big companies make so much money that it’s almost impossible to control them; the settlements are a drop in the bucket. And the U.S. Supreme Court has placed limits now on how much, financially, these companies can be punished. In my opinion, this is one of the biggest issues facing our country. How are we going to handle these large, multinational conglomerates that own our politicians, that own the state Legislature, that own Congress?

Like a lot of other people, I’m searching for that answer. ♦