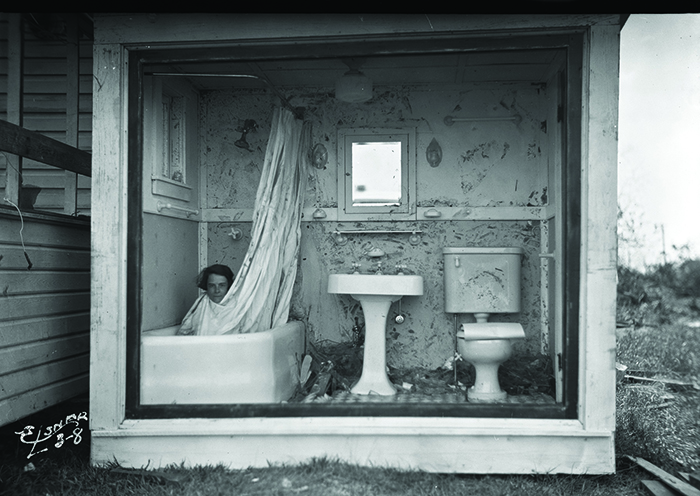 After “The Big Blow”

Summer in the tropics means rain and the start of hurricane season. While most forecasts are predicting a delightfully sleepy 2015 Atlantic hurricane season, thanks in part to El Niño, it would take just one major hurricane to cause catastrophic damage.

An independent study by disaster modeling experts Karen Clark & Co. found that one major hurricane, with a 1-in-100 chance of occurring, could result in more than $250 billion in damages to South Florida, depending where it makes landfall. This is due, in part, to the increasing property values in South Florida and the latest construction boom.

A similar situation hit South Florida in September of 1926 when a hurricane hit. Known simply as “The Big Blow,” the destruction that resulted was the worst in U.S. history, at that time, with $165 million in damages and more than 2,700 houses destroyed. Seen here, Mrs. A.O. Weeks is taking a bath shortly after the storm in what is left of her Dania home. ?

Information for this feature is courtesy of the HistoryMiami Archives & Research Center, which is open to the public and contains more than 1.1 million images of southeast Florida, the entire state and the Caribbean from 1883 to the present. For more information, please visit www.historymiami.org. (This is image 1979-085-12 from the collection.)