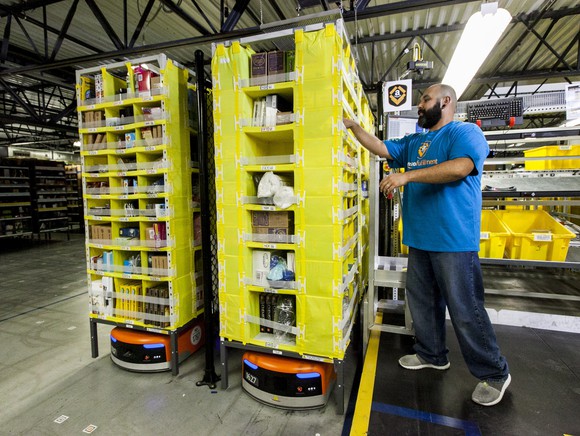 If investors were paying attention to what management has been saying for the past three or four quarters, perhaps expectations wouldn’t have been that high. Amazon is in the midst of yet another investment cycle. And despite record amounts of cash coming in, the company is spending more than ever to continue growing its business. Management has talked about a ramp-up in investment since the second quarter of last year, when it made plans to double its video content spending and expand its fulfillment capacity.

That growth in investment hasn’t slowed down, and investors shouldn’t expect it to anytime soon. Here are four big areas where Amazon is investing.

Amazon annoyingly lumps all of its technology and content spending into one line item. The biggest contributors, however, are its video content for Prime Instant Video and spending on Amazon Web Services (AWS), its cloud computing division.

That incorporates the step up in spending on video content for Prime Video that Amazon started in the second half of last year. Growth in content spending may slow somewhat in the second half of the year as it laps its initial investment, but it won’t slow too much as Amazon continues to expand its catalog, particularly internationally.

The biggest driver last quarter was a significant increase in AWS infrastructure in the form of capital leases. CFO Brian Olsavsky told investors the company increased capital leases by 71% over the past year to service increased demand for AWS and expand geographically. That trend ought to continue as Amazon continues to battle for market share from Microsoft(NASDAQ:MSFT) and Google in the rapidly growing cloud computing market.

Sales teams for AWS and advertising

It’s only natural that Amazon is hiring sales associates for two of its fastest growing businesses at a rapid clip. Overall headcount at Amazon expanded 42% year over year last quarter. Olsavsky says the sales teams for AWS and its burgeoning advertising business expanded at an even faster pace.

Amazon reports its advertising revenue along with revenue from its co-branded credit card in its “other” category. Growth slowed to 53% last quarter, but reached $945 million. Olsavsky said, “Advertising revenue growth has been strong and fairly consistent over the past three quarters,” so it may be other items or legacy products in the other category producing the slowdown.

In case you hadn’t heard, Amazon is growing extremely fast. Not only did revenue increase 25% last quarter, but paid units also grew 27%. (That may be a side effect of Prime, which enables customers to make more smaller orders without worrying about shipping fees.) What’s more, revenue from third-party seller services increased 40% year over year.

As a result of the growth in units and third-party shipments, Amazon continues to invest heavily in fulfillment capacity. Last year, it added about 30% more square footage to its distribution center network, and it plans to add a similar percentage this year. Most of those additions will come over the next few months as Amazon ramps up for the holiday season. Last year, 80% of its expansion took place in the second half of the year, and Olsavsky told investors to expect a similar split this year.

Investors should see a big step up in capital spending next quarter.

Amazon is an international business, and it’s making a big push in some emerging markets, particularly in Asia. Last year, it expanded Prime to China and India, and it continues to invest billions of dollars in both countries. It’s biggest focus, by far, appears to be India.

“We’re very hopeful with the progress we’ve made with sellers and customers alike in India,” Olsavsky said, “and we see great momentum and success there. So we’ll continue to invest.”

Because of government regulations, Amazon doesn’t sell items directly in India, instead operating a marketplace for third-party sellers. Just the same, Amazon is building out infrastructure to support its marketplace just as it’s doing in the United States and other developed markets. That supports a valuable Prime membership, which offers similar benefits as in the U.S. — free shipping, video streaming, and more.

The size and growth of the opportunity in India and the rest of Asia make Amazon’s investments a smart move for the long term.

10 stocks we like better than Amazon
When investing geniuses David and Tom Gardner have a stock tip, it can pay to listen. After all, the newsletter they have run for over a decade, Motley Fool Stock Advisor, has tripled the market.*

David and Tom just revealed what they believe are the ten best stocks for investors to buy right now… and Amazon wasn’t one of them! That’s right — they think these 10 stocks are even better buys.