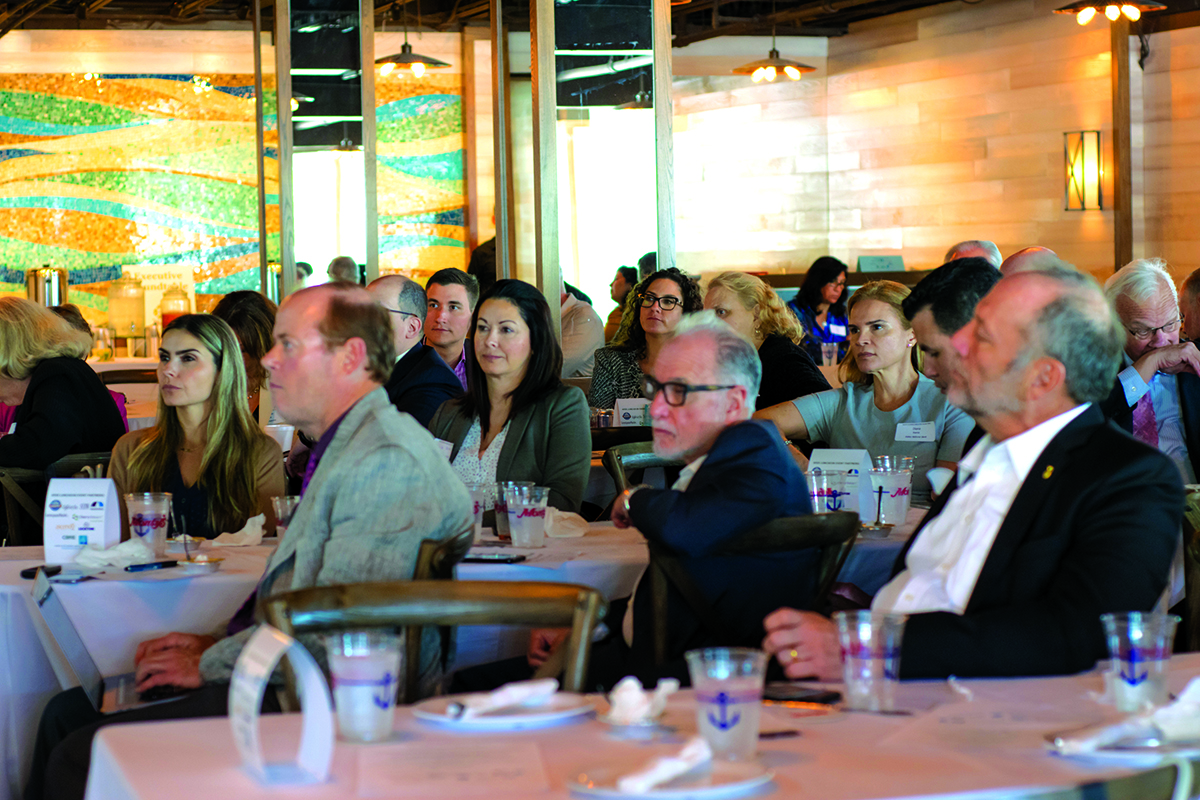 The moderator for the panel at Monty’s Raw Bar in Coconut Grove was Michelle Martinez Reyes, chief marketing officer at the law firm Greenspoon Marder. The panelists:

Martella talked about working at Amtrak, where he put together an innovation lab. It first focused first on technology and involved traveling to several offices. The result was 60 good ideas that were narrowed down to five great ones that would affect customers. Then they were evaluated as traditional business cases, which narrowed it to two. One idea, an app for passengers, saved about $700,000 in the first year. It helped passengers find the right tracks and deal with delays. That helped cut the number of passengers who would line up to talk to customer representatives.

At MedData, the company used robotics to scan and upload the voluminous number of documents from insurance company. “That was an example of innovation and efficiency,” he said. While a common fear about robotics and artificial intelligence is job displacement, MedData has been able to relocate workers to other jobs.

Kohl got a big assignment just after she joined Banco de Brasil Americas in 2012. “Are you prepared to implement a prepay debit program?” “No problem.” “Throughout the world?” Let’s talk about that, she said.

The backstory is that the president of Brazil encouraged students to study abroad and then bring their knowledge back to the country after graduation. “However, anybody who studied abroad back in the day couldn’t just open a bank account in a foreign country,” Kohl said. Credit card acceptance also was difficult in some countries, and wire transfers could be cumbersome and have fees. The bank created a prepay card that worked with 12 currencies. More than $1.3 billion was loaded on the cards and the bank received a national award for innovation.

About seven years ago, Farlie said, he noticed how family offices were playing in the emerging companies acquisition space. The fact that family offices tended to be under the radar—without websites, in many cases—meant he could innovate by researching and creating a list of family offices. The family offices would then be candidates to invest in businesses Farlie represented. The result was more competition for client companies, he said.

Another innovation he noticed dealt with money that was held in escrow after someone sold a business. The idea was to protect the buyers in case something wasn’t quite up to snuff. The escrow amounts could be substantial, such as $5 million to $10 million on a $100 million transaction, he said. The solution was an innovation known as representational warranty insurance. That would help assure buyers a company’s business was what it was represented as during the selling process. The new insurance made purchase agreements less contentious, Farley said. There also was a reduced incentive to make claims because both sides of the transaction would pay a deductible before the insurance would pay. “It has helped put more money in clients’ pockets on a much-sooner basis,” Farley said.

Longoria faced the challenge of transforming the legal department at MasterCard—specifically, how the company engaged with outside law firms. The goal was to have fewer law firms, to look at pricing, and to ensure outside firms complied with information security standards. The change process was painful, because many lawyers tend to be traditional in the way things are done and some had favorite outside lawyers, she said. The process also found lawyers were doing work that nonlawyers, such as paralegals, could do. The transformation found lots of opportunities for automation. She stressed the need to have careful management of the change process to promote engagement.

Mortakis said the “internet of things”—interconnectivity between digital devices—has changed hotels. The vacation resort company adopted bracelets that identify customers and link to their credit cards. That means they don’t have to bring wallets to, say, the pool area to pay for a piña colada. The solution to a privacy concern was to have customers opt in. Mortakis has found that consumers not only opt in, but they want to be channeled to products and services they are interested in.♦

SFBW is the exclusive media partner of the South Florida Executive Roundtable. For more information on SFER, visit SFexecRoundtable.com.