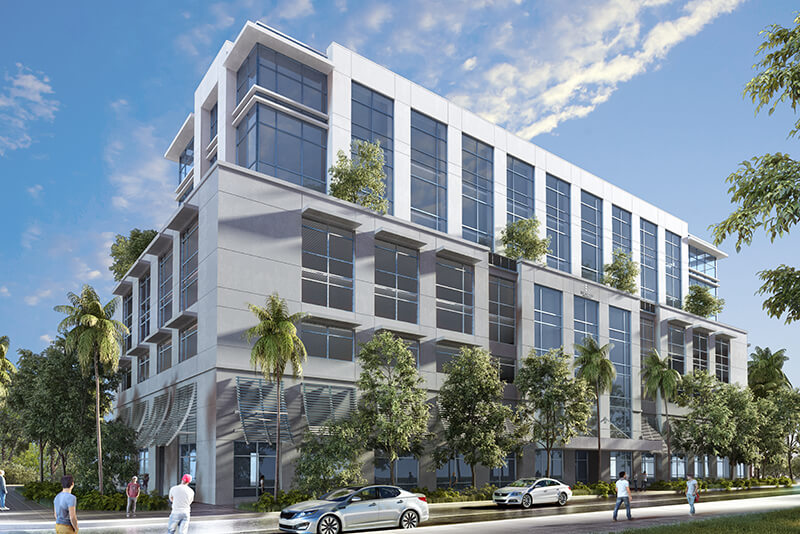 Driving north from Aventura to Hallandale Beach on Federal Highway, you’ll see an office tower on the left, a sign on the right that says “Welcome to Broward County,” and a construction site on the left just past the office tower.

The office tower is the nine-story Optima South, completed in 2013, and located in Aventura, which is in Miami-Dade County. The construction site next door is the future Optima Plaza North—at 28 stories, designed to be three times as tall as its older sibling, and located in Hallandale Beach, just over the line in Broward County.

The projects come from Optima International, a company owned by Ariel Bromberg with his uncle and cousin. Four years ago, after completing Optima South, they decided “to connect two counties” by starting their new project a few yards away, he says.

“We saw a market and a good opportunity,” Bromberg says from an Optima South conference room looking out over the lot where Optima North will rise.

Optima North is expected to attain LEED Platinum status from the U.S. Green Building Council, which oversees the Leadership in Energy and Environmental Design program. It will be the first structure in Broward County resting on a deep soil mixed base, the same ground-fortification process used in luxury construction at Brickell City Centre. The process began in May, and Bromberg expects foundation work to begin in October with building completion in 2020.

The Optimas differ in size and scope. South offers 116,000 square feet of leasable office space, but North will contain 300,000 square feet in what Bromberg says will be “the best office building in the area.” He expects the annual leasing price to be $50 a square foot. South was built for $40 million, while North will cost $90 million.

Farther north on Federal Highway, at Southeast Eighth Street, is Beacon Tower from H&M Development. Similarly, it follows a previous project by H&M in Aventura. Construction on the new Beacon Tower in Hallandale Beach is well underway on what will become an eight-story Class A building certified by Green Global.

Development director Freddy Boulton says Hallandale Beach has all the advantages of Aventura for much less. While Beacon Tower Aventura sells office units for $500 a square foot annually, with resales reaching $550 per square foot, the new building is selling at $420 a square foot and is already 80 percent sold.

Due to be completed in the first quarter of 2018, Beacon Tower is another of the three office projects currently under construction in Hallandale Beach, according to Keven Klopp, the city’s development services director. The third is the Accesso Office Building at 100 N. Federal Highway, a five-story building of nearly 28,000 square feet, developed by Accesso One at an estimated cost of $4 million.

The sole combined retail-office project in Hallandale Beach is Village at Atlantic Shores, a 31,000-square-foot property at 801 N. Federal Highway, near Mardi Gras Casino. The two-story building will have offices on the top floor and retail on the ground, anchored by Lucky’s Market. Developed by Atlantic Village 1 for $5 million, the project will be followed by a second phase of 38,000 square feet once permits are secured.

Other office and retail projects may be found on the city’s website (hallandalebeachfl.gov).

What makes Hallandale Beach so attractive to developers? Master developer Tibor Hollo of Florida East Coast Realty has been building in South Florida since 1956. He started buying land in Hallandale Beach in 2006, and as he said last year, “nestled between Hollywood, Fort Lauderdale and Miami, it’s ready for coming into this century.”k