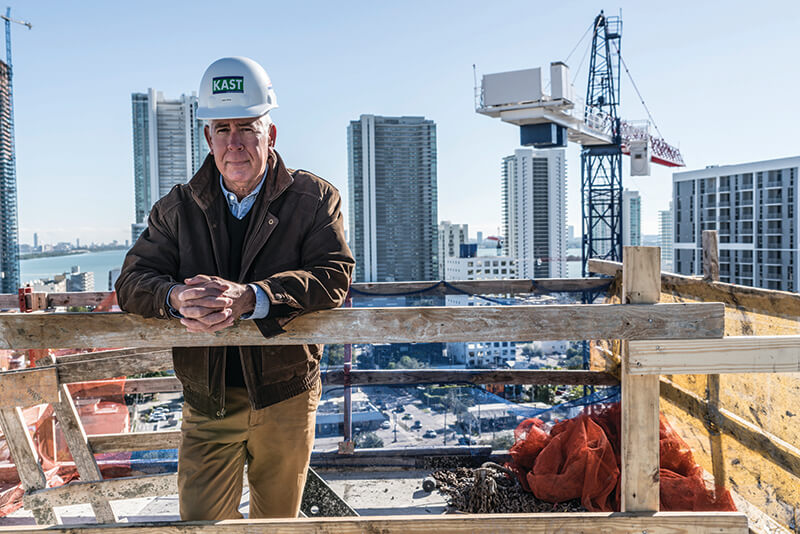 Every morning, Mike Neal does “a lap around the office.” He wants to know how employees’ days are going and how their kids are doing. Later, he’ll grab a sandwich and sit in the lunchroom.

It feels like family, he says. But this is no mom-and-pop operation. As CEO of Kast Construction, Palm Beach County’s largest general contractor, Neal has worked hard at building not only condos, senior-living facilities and country clubs, but also building a culture of communication and comfort among his 240 employees.

“I’ve worked hard on creating an environment where people don’t feel they can’t approach their leaders,” Neal says. “I don’t want to be an intimidating presence around the office. I want people to feel open to discuss business issues. A problem on a job site can turn into a $10 million problem in a heartbeat if you have management by intimidation rather than what I call a genuine, open, transparent philosophy about how we treat people.”

That philosophy underlies the course Neal set for Kast when he joined the company as president in 2011. Then a $30 million company focused primarily on Palm Beach County, Kast today is approaching $600 million in annual revenue and is ranked among the top five contractors in Florida and among the top 200 in the country. Forbes ranked it among America’s best midsize companies for workers.

And since Neal came out of retirement to take the reins of Kast, the company has spread its footprint west, with a regional office in Tampa, and south with an office in Miami.

“We started our growth by first following our clients to southwest Florida and then to Tampa, St. Petersburg and Sarasota,” says Neal, 62. “We stayed out of Miami on purpose. We didn’t want to get caught up in the second condominium bubble, so we zigged when everybody else was zagging. Now, many of our clients are demanding we build for them in Miami, and we felt it was important enough to hear them and listen to them.”

“Everywhere from [Interstate] 4 south, from Tampa to Sarasota, and then from West Palm Beach to Miami, I’m pretty impressed with the things I’m seeing happening in our state. We were a little bit smarter and a little bit lucky calling Tampa when we did 3½ to four years ago. Tampa’s going through a bit of a renaissance, and that’s spilling over into downtown St. Pete and pushing south into Sarasota,” he says. “These are great walkable cities, and I’m a walkable-city guy. I love what I see happening in Tampa, St. Petersburg, Sarasota, Miami, Fort Lauderdale and West Palm Beach. We could stay very busy here.”

Still, there’s more to building a top company than rebar and concrete, and Neal gives much credit to his philosophy of management from an early mentor. He learned the importance of leadership from, and continues to follow the philosophy of, former General Electric CEO Jack Welch: Develop great leaders at every level of the organization.

“When you do that,” he says, “you have the ability to grow, because you’re growing around your leaders. We have some very smart guys who we’ve turned into great leaders.”

Nevertheless, for all the success Neal has helped bring to Kast, he says he tries to remain “humble and approachable.”

“I don’t want to be the big, flashy guy who domineers and dominates everything,” he says. “I’m going to look back at my life and measure my success, I think, by how many leaders I’ve created and how many careers I’ve changed, how many lives I’ve changed. It’s really a lot of fun, and very satisfying to pass the torch to other people, identifying good people and nurturing that talent and mentoring them and watching them go as far as they can go.” ♦