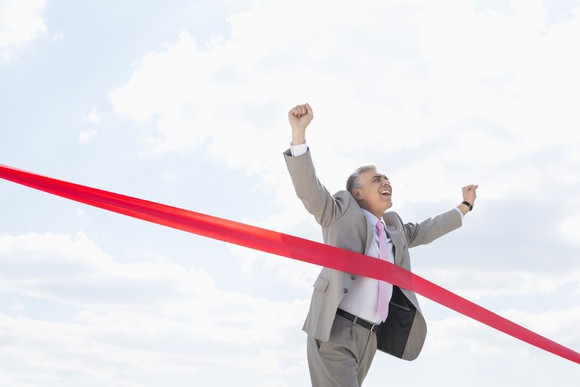 Debt-Free by 53? Here’s Why You Should Meet This Milestone

If you can manage to rid yourself of debt by age 53, you’ll be setting the stage for a financially healthy retirement.

If there’s one thing Americans are good at, it’s racking up debt. The typical American household carries over $15,000 in credit card debt, $168,000 in mortgage debt, and $48,000 in student loan debt. But despite these somewhat ominous figures, according a recent CreditCards.com poll, the average American anticipates being debt-free by age 53. Better yet, in the context of this particular survey, “debt-free” refers to all types of debt, from credit card balances to mortgage payments. Now that’s a goal worth working toward.

Now think about your kids. If you had them in your 30s, you’ll most likely have college costs to contend with by the time you reach your early to mid-50s. Wouldn’t it be nice to have extra money on hand to help cover those tuition payments? And let’s not forget the expense of throwing a wedding, which you may also be dealing with by your early to mid-50s. The typical U.S. wedding costs more than $30,000, so if your goal is to finance your children’s nuptials, it’s all the more imperative that you free up that cash. If you manage to pay off your mortgage and reduce your monthly expenses by $1,200 by the time your first child gets engaged, over the course of a year, you’ll have saved enough to cover half the cost of the average wedding.

If that’s not motivation enough, think about it this way: Eliminating debt can actually help you avoid future debt. Imagine waking up one day to a leaking roof that costs $2,400 to fix, with no savings to tap into to cover that expense. If you’ve just stopped paying your mortgage, thus freeing up that $1,200 a month, you’ll have that repair paid off in just two months’ time. But if you’re forced to charge that repair and it takes you two years to pay off your balance, you’ll wind up losing roughly $300 to interest.

Another major benefit of eliminating all debt by age 53 is the ability to ramp up retirement savings and benefit from the tax advantages that come with them. Anyone 50 and older can currently contribute up to $24,000 a year to a 401(k) and $6,500 to an IRA. At a time in your life when you’re conceivably earning more than in years prior, maxing out on those contributions means not just padding your retirement nest egg, but lowering your taxes in the short term. And while the money you save during your 50s obviously won’t have decades to grow, if you start at 53 and wait till 67 to retire, you’re still giving yourself a good number of years to increase your savings balance.

Let’s say you pay off your debt by 53 and as such are able to start saving an additional $10,000 a year for retirement. Let’s also assume that because you opt for a more conservative investment mix at this point in your life (which you should), you’re able to generate an average annual return of 5%. After 14 years, you’ll have close to $200,000, which can go a long way in retirement.

While “debt free by 53” is certainly an optimistic motto to live by, whether it’s actually attainable is a different story. According to a 2015 report by The Pew Charitable Trusts, an increasing number of older Americans are entering retirement in debt. Specifically, 80% of baby boomers (today’s 51- to 70-year-olds) carry at least one form of debt. In other words, don’t despair if you’re among the many who don’t manage to meet this lofty objective. It might take you till 57, or 62, or some other age to completely eliminate your debt, but if you keep working toward that goal, there’s a good chance you’ll get there eventually. And considering that one out of every 10 Americans expects to die in debt, achieving debt-free status is an impressive feat, no matter what age it happens at.