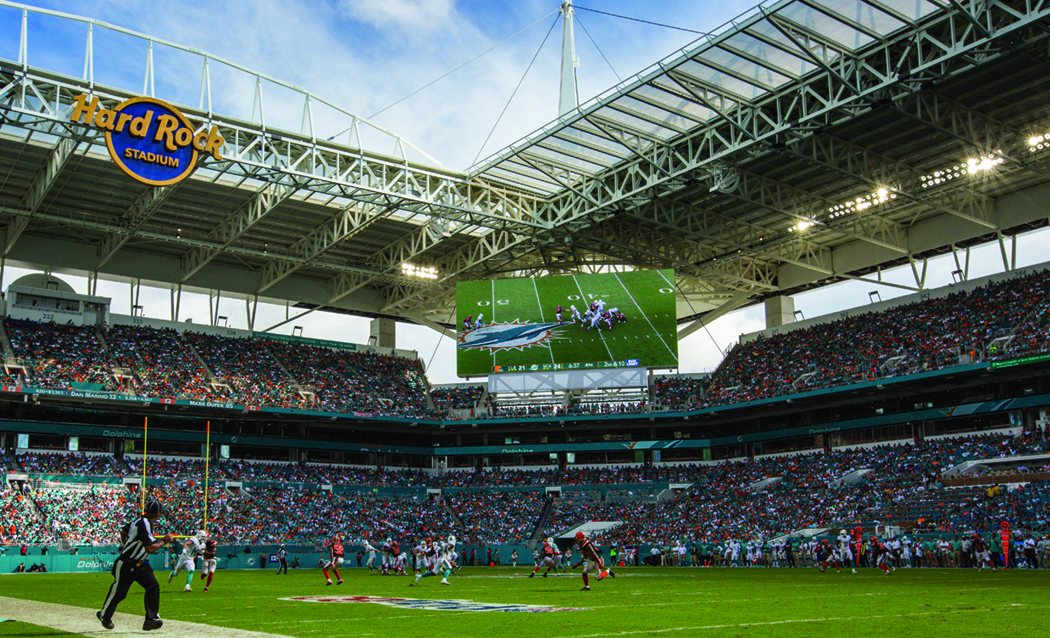 How the Dolphins Created a Global Entertainment Destination

Miami Dolphins owner Stephen M. Ross spent $500 million to enhance Hard Rock Stadium, and now all senior executives Todd Kline and Jeremy Wall have to do is make sure it pays off.

Their efforts seem to be working. The highest levels of premium seating have a waiting list for next year and the team expects to sell out each regular-season game this year –just like it did last year.

“It all starts with Stephen Ross and his vision for building a global entertainment destination,” says Kline, who is senior vice president and chief commercial officer. Not just any stadium would do for the New York billionaire developer when the Knight Frank global real estate consultancy ranks Miami as the sixth-most important city among the ultra-wealthy.

Consider the experience of having one of the Nine Suites – so named because there are just nine of them.

It starts with a limousine picking you up. Then you get dropped off at the stadium, where someone holds a sign with your name, waiting to escort you to your suite, which is on the home sideline between the 30-yard lines.

You may use one of the four passes provided to get on the field before the game. You may settle into one of the plush, oversize leather chairs and see instant replay on your own TV set. There’s a lounge area with comfortable couches. Step inside to cool off and there are drinks at a private bar and an array of food, such as sushi and crab claws. It’s all included, of course.

The lounge area for The Nines, the most exclusive seating at Hard Rock Stadium

There’s a road trip with the team every season and a private dinner with former quarterback Dan Marino, an NFL Hall of Famer. No worries about going to the Super Bowl, because two tickets are included.

Just below that tier is the 598-seat 72 Club, named after the team that went undefeated in the 1972 season. The 72 Club also has comfy seats, four to a box, and access to a restaurant and bar.

The stadium has plenty of other seating options, including clubs in the end zones, swivel-chair seating with tables on the 100 level, and Bokampers MVP Club, which has an all-you-can-eat buffet. You also may dance away the game at the LIV nightclub, which has private cabanas.

Upcoming is a renovation of the entire BankUnited club level at the stadium, designed by the famed Rockwell Group. The number of suites will drop from 180 to 150, and four new clubs will be created on each corner of the club level.

The fan experience in general has been improved by the canopy, which shields 92 percent of the seats but still allows for natural grass on the field. Because the Miami Marlins no longer play at the stadium, front-row seats moved 24 feet closer to the sidelines. The team made a commitment to working-class fans by keeping 17,000 seats priced at $50 or less a game.

Two new tap rooms have 56 types of craft beers, including 18 from Florida on tap.

Perhaps the biggest sign of Ross’ vision paying off is the 18-year agreement that put the Hard Rock name on the stadium. The Seminole Tribe of Florida, which owns Hard Rock, is based a few miles north of the stadium along the Florida Turnpike.

A lot of what the Dolphins do involves brand activation to reach consumers, which Hard Rock is getting in spades. Its logo is visible as you walk up to the stadium, and TV viewers see it on the new canopy during broadcasts. It’s on the VIP helipad and the stadium’s south gate, which is now the Grand Plaza presented by Hard Rock.

Hard Rock’s connections in the music world also open up the possibility of more performances at the stadium, he says.

A bonus for Hard Rock and the Dolphins’ other partners is the 2020 Super Bowl coming to the stadium. In 2017, the Brazilian men’s national soccer team will play a series of matches at the stadium and Spain’s Real Madrid soccer club will open the International Champions Cup.

Kline had a hand in negotiating the deal and oversees all of the sponsorship revenue and brand activation for the Dolphins, including corporate partnerships, media and special events.

“We work with the business community of South Florida – anyone interested from a corporate perspective in using the Miami Dolphins and Hard Rock stadium to promote their brand, product or service,” he says.

One example of a successful partnership is with the AARP Foundation, which sponsors the Dolphins’ Special Teams. The community volunteer program serves more than 200 charitable and civic organizations in the region. One of the outcomes related directly to AARP’s mission was attracting 5,000 fans to Nova Southeastern University to pack a million meals for senior citizens, Kline says.

The Special Teams page on the Dolphins’ website (miamidolphins.com) includes the AARP logo, and it offers an array of volunteer opportunities, which are sometimes held at the stadium or involve current and former players.

Walls, who is in his second season as chief marketing officer after previously being chief revenue officer, said there are many other examples of how the stadium has enhanced the fan experience.

The usher team has been brought in-house, and Ritz Carlton provided training.

The Dolphins eased the flow of traffic into the stadium through partnerships with Uber and SunPass as well as digital tickets and new turnstiles. After games, fans can get a message on where to go in the Uber parking lot to get their cars.

Under Walls, the Dolphins have increased ticket sales revenue by 47 percent in three seasons, which led to selling out each regular-season home game in 2015. (The team expects to sell out every game this year, too.) In 2014, the Dolphins had the highest season ticket member renewal percentage in five years and set an all-time NFL record in group sales.

The Dolphins have invested heavily in marketing capabilities, much like they have the stadium.

While most sports teams have a small marketing department and then outsource to an agency, the Dolphins have an in-house team of more than 30 employees handling all the video, photography, creative material, marketing and branding.

The idea is not to just cover the team, but tell stories and create an emotional connection, Walls says. The content includes behind-the-scenes stories, weekly chats, podcasts and film breakdowns through the team’s extensive video library.

The payoff? As the season started, the Dolphins were ranked tops in the NFL for social media, with more than 15 million views in a month. ↵