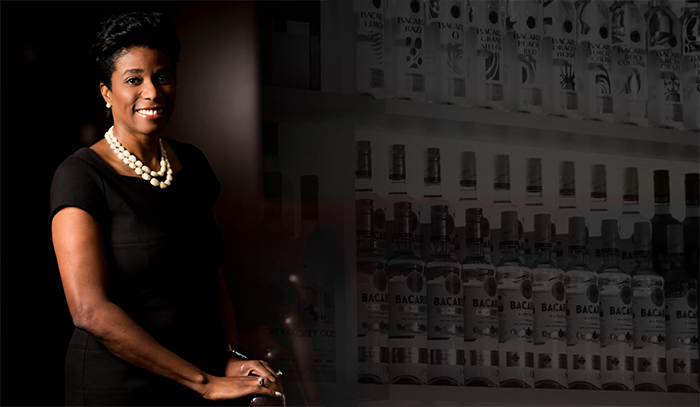 Marlene Mitchell Gordon grew up in a tiny impoverished community called Round Hill in southeast Jamaica. “We had no electricity and drew water from a tank,” says Gordon, now vice president and general counsel for Bacardi North America, a subsidiary of Bacardi Ltd., the world’s largest privately owned liquor enterprise. “We cooked on coals, used an outhouse for a bathroom, and I walked miles to a one-room schoolhouse.”

Gordon’s journey from rural Jamaica to corporate success in America is a powerful story of personal achievement. And, as she points out, her efforts were always buttressed by a sense of strength and capacity, inspired by the example of her formidable mother, Lynne Mitchell, who died from the effects of a rare genetic disease called familial amyloidosis.

Gordon was 8 when her parents came back from a five-year stint working in the U.S. and brought her and her brother to Montego Bay. “I had never had my own room and hadn’t slept in a bed of my own until then,” she says.

Adjusting to the U.S.

When she was about 10, Gordon moved to Chicago with her father and brother, while her mother, who also grew up in poverty in Jamaica, went to Germany after winning a scholarship to study hotel management.

Gordon attended a school in the Hyde Park neighborhood of Chicago’s South Side. She found that the students had trouble understanding her Jamaican accent and knew nothing of her homeland. “They asked if we swung from trees,” she says. But her new friends dedicated themselves to “teaching me to talk American.” Still, as Gordon learned to assimilate to her radically different urban environment, she remained true to herself. “I always had a very strong sense of who I was. You don’t let anyone else define you.”

When Gordon’s mother returned to the U.S., she worked in hospitality management and became an executive with several major hotel groups. She always remained close to her children, exerting a powerful impact on their lives.

After Chicago, Gordon and her brother lived in different parts of the country with their mother, friends and family. She finished her last two years of high school in the tiny rural town of Vernon Valley, New Jersey.

Gordon began her college career at Rutgers University, but transferred after her freshman year to the University of Chicago, where she earned her bachelor’s degree in economics; she then went on to obtain her law degree from Northwestern University.

“We knew all along that education was the tool for improving ourselves,” she says. “We saw that in our mother.”

During law school, Gordon worked as a summer intern at the Chicago law firm Sidley Austin, where she worked with an attorney named Michelle Robinson, who would later become Michelle Obama.

After completing her studies, Gordon married her husband, Charles Gordon, now a vice president at JM Family Enterprises. The two met when they were about 8 years old in Jamaica and now have two sons, Christopher and Zachary.

In 2012, Gordon joined Bacardi as vice president, deputy general counsel, and was appointed vice president, general counsel, for Bacardi North America in July 2013. In this role, Gordon is a strategic business partner and the senior executive for legal and compliance activities for all the companies within Bacardi North America. She is also head of Bacardi’s Global Women in Leadership Program, whose mission is to attract, develop, mentor and retain talented women at Bacardi and help them realize their full leadership potential. “We want to empower women to speak up, to show up and achieve their own potential,” Gordon says. “This is all related to the bottom line. We want to attract and retain the best women.”

Gordon also notes that women decide on more than 85 percent of consumer purchases in the U.S. “Women are also our customers,” she says. “We want to make sure our brands resonate with women.”

The story of how Gordon, born into a poor family in a third-world nation, adapted to growing up in the U.S., studied hard to take advantage of every level of education and developed personally and professionally to become an outstanding corporate attorney – all while raising a family – makes her an inspiring public speaker. She has also been recognized by Success magazine as one of South Florida’s most influential and prominent black women and was named one of Florida’s Most Powerful & Influential Women by the Florida Diversity Action Council.

“Hope always kept us going,” she says. “My mother opened doors for me, taught me to be independent and to take care of myself. I am the daughter of a very strong mom.”

Giving back in Jamaica

Equally inspiring is Gordon’s support and dedication to the Lynne Mitchell Foundation (lynnemitchellfoundation.org), which provides breakfast, lunch, transportation, scholarships, books, school supplies and other resources to about 150 underprivileged K-6 students at Seaview Elementary School in the village of Southfield, St. Elizabeth Parish, Jamaica. Decades ago, Gordon’s mother attended the one-room school that now receives support from the foundation. In addition to ongoing financial aid to Seaview, the foundation is trying to raise about $500,000 to build a new, larger and well-equipped school to serve students in this rural area.

�I was given an opportunity,” Gordon says. “And if I can offer opportunities and help even one child, then it’s worth it to me.” ?