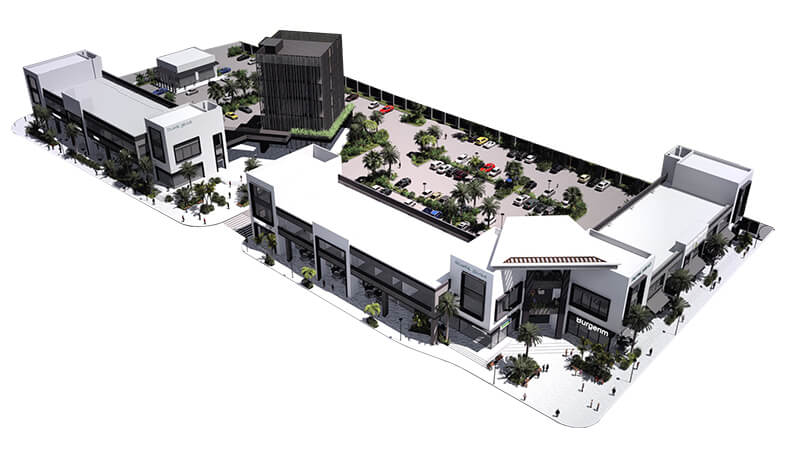 Major developers are creating a wave of mixed-use projects that will inspire vibrant live/work/play places in Hallandale Beach.

One of the most active developers is Grupo Eco Developers, a more-than-35-year-old Mexican company that has invested about $75 million in five projects in the city.

“We really believe in Hallandale Beach,” says Grupo Eco developer Elias Benaim. “It’s a small city with a lot of vibrant momentum happening. It’s sandwiched between Aventura and Hollywood. For me, it was the organic next city to grow.”

SFBW interviewed Benaim at 7th Avenue Village, his first Hallandale Beach project, at 701 W. Hallandale Beach Blvd. Rather than the typical strip shopping center with rows of parking in front, the U-shaped center has a New Urbanism vibe with lush landscaping, brick pavers, stonework and a pergola. The interiors have double-height ceilings, which give a feeling of airiness.

“You need to invest in the products and your vision to get what you want. It doesn’t come by doing a regular off-the-shelf strip mall,” Benaim says.

The center opened two years ago and has attracted national tenants, such as Wingstop, T-Mobile and State Farm. There’s also a hip factor with Ihookah Café.

Grupo Eco has four acres near the Mardi Gras Casino on Federal Highway for its two-phase Atlantic Village project.

The first phase of Atlantic Village, which is expected to be completed in December, will be a foodie paradise with Doggi’s Arepa Bar, which started with two locations in Miami-Dade; Dr. Limon Ceviche Bar, which features the work of Peruvian executive chef Carlos Brescia; Burgerim (Hebrew for “many burgers”), which provides an array of gourmet mini-burgers; and La Estancia Argentina, which is moving its bistro-style restaurant to Hallandale Beach after 13 years in Aventura.

For the kids, there will be Flippo’s, an indoor playground. For the older set, there’s Mancave Cigar Lounge.

Construction is beginning on the 70,000-square-foot second phase of the Atlantic Village, which will include retail space and a six-story office tower.

The neighborhood will be further fueled by ArtSquare, which will have 350 luxury rental apartments and 13,000 square feet of retail, Benaim says.

“The city has been very receptive of this project because right now it’s a trailer park. They are putting all this money in the [Peter Bluesten] park and they are seeing the progress happening,” Benaim says.

Grupo Eco also will be developing the Universal Tile site at 308 N. Federal Highway, and it bought the lot on the northwest corner of Northwest First Avenue and Hallandale Beach Boulevard, which will be the entryway to the revitalized Fashion Art and Design District.

Benaim says Grupo Eco is exploring whether to bring investors into some of the upcoming projects.

A project by Château Group could bring a major statement to the southeast corner of Federal Highway and Hallandale Beach Boulevard.

Château initially envisioned a $375 million project with 726 residential units, 137,384 square feet of retail and 280 hotel rooms, according to its application with the city. Some have likened the project to a Hallandale Beach version of Miami’s Brickell City Centre.

The project, on an eight-acre site, is under the review by the city, says the developer’s Esteban Koffsmon. He envisions an open park on the second-floor level with a loop where people can walk or run.

Château is a more-than-35-year-old company that has done major projects in Argentina, Uruguay and Miami-Dade County, including the Ritz Carlton Residences Sunny Isles Beach and Fendi Château Residences in Surfside.

Château’s project is undergoing some revisions after a review by the city’s planning and zoning, and Koffsmon wants to make sure he addresses concerns by the city commission, which has new members since the project started.

“This corner can trigger development and really define a downtown area,” Koffsmon says.

Four blocks east of Château’s project is the site for another major mixed-use project, Hallandale Oasis, by Romagnole Investment Properties. The project, on a 10-acre site, is imagined as having two 26-story residential buildings with 250 units each and more than 93,000 square feet of commercial and office area.

Romagnole’s Eduardo Jakubowicz said the project will include a swimming pool, outdoor eating space, a gym, a swimming pool, cabanas, a place for outdoor screening of movies and a lot of green space.

Jakubowicz says his company has been in Hallandale Beach since 2013 and describes it as a vibrant city with a strategic location that is turning it into a hotspot.

“You have the beaches within walking distance to casinos and shopping,” he says. “The vision of our project is to create a place where residents can live, have fun and enjoy all that the city of Hallandale Beach can offer.”

The project has received approval from the city, and submission of building permits is pending. “We are working with our architects, Arquitectonica, and the city to obtain all the necessary permits,” Jakubowicz says.

The changes along the street are getting noticed by existing business leaders.

Michael Di Stefano, store manager and assistant vice president for the TD Bank branch at 1626 Hallandale Beach Blvd., says the city is undergoing a renaissance. That is helping add to the bank’s existing client base, which includes many customers from Canada, where TD is headquartered, along with locals and seasonal residents.

These days, he’s seeing more younger customers coming in as the city evolves.k