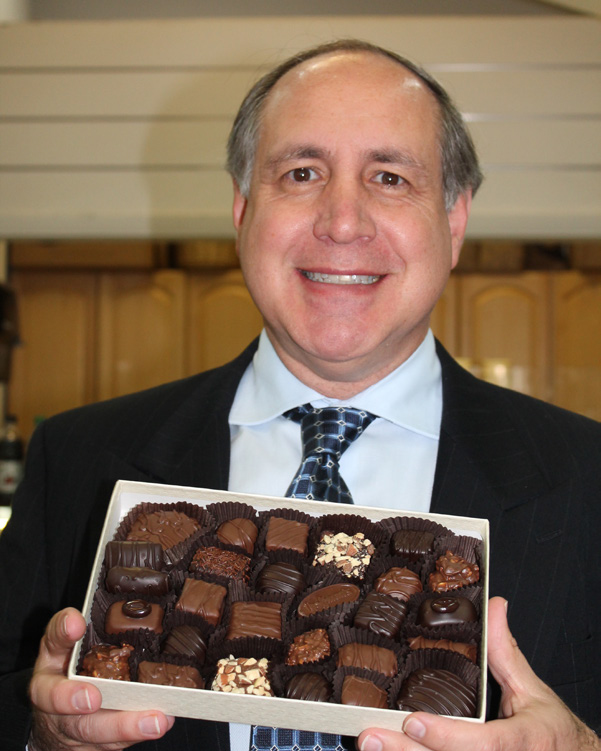 “The one thing I was most impressed by when I did my due diligence is where they sourced their products. The apricot and pineapple are sourced from Australia. They are the best products in the world. The nuts are bought direct from the farms. We have them within days of being harvested.”

The outcome of this story might be better than winning the golden ticket in “Willie Wonka and the Chocolate Factory.” Fred Meltzer not only got the job of running Hoffman’s Chocolate, but found love, too. Fred started his career about as far from the world of chocolate as one might imagine, working for a boutique CPA firm that catered to real estate clients in Washington, D.C.

He came to South Florida in 1989 as a controller for Nelson Peltz and Michael Swerdlow, who took over Hollywood Inc., the original developer of the Broward city. Fred subsequently carved out a career helping investors buy out mid-sized companies and then running them. By 1997, though, he wanted to be a stay at-home-dad for his daughter Brea, who was born the year before. He had learned about Hoffman’s Chocolates a couple of years earlier, but hadn’t pursued a position. Accountant Gary Gerson urged Fred to take another look, so that September Fred said he would work six months for free. Paul Hoffman and his daughter Sandra would get to know Fred and vice versa.

“The one thing I was most impressed by when I did my due diligence is where they sourced their products,” Fred says. “The apricot and pineapple are sourced from Australia. They are the best products in the world. The nuts are bought direct from the farms. We have them within days of being harvested.” After juggling two jobs, often working at Hoffman’s until 1 a.m. after his regular gig, Fred bought out Paul Hoffman’s shares.

Sandra, who was executive vice president, stayed on and continued to play a key role with expertise that stems from her marketing degree at FAU. “Look at the packaging and gifts and designs she comes up with,” Fred says. “That sets our companies apart.” Hoffman’s went on in 2009 to acquire Good Fortunes, which makes giant gourmet fortune cookies. In 2010, it acquired Boca Bons, which makes gourmet bonbons that are sold online and in major retailers including Macy’s, Bloomingdales and Saks Fifth Avenue. The new online-oriented businesses helped balance the company out as brick and mortar retailers were hit by the “Great Recession,” Fred says.

At first, Sandra and Fred just had a business relationship, but that evolved into a friendship. Fred says he admired her for the care she gave to her daughter, Christine, who has Down Syndrome. They both ended up in the dating scene and would console each other about their misadventures.”The turning point was probably about five years ago,” Fred says. “We usually would go to charity events together. Hoffman’s would be involved with hundreds of charities a year. There was this one event that was at the Breakers and for some reason we weren’t seated at the same table. I kept looking at her with her date and she kept looking at me with my date.”

They talked about it afterwards. “We each said, “I don’t know how you feel,” but we each said we would be open to dating,” Fred says. In May 2011, they got married. The happy story continued. Fred’s daughter is now 18 and was admitted to the University of Florida, while Christine is one of the best employees at Hoffman’s, Fred says proudly. In February 2013, Hoffman’s was approached by BBX Capital of Fort Lauderdale, which holds some of the former assets of BankAtlantic. “I knew at the time that we wanted to be a consolidator of candy and confections,” says Levan. The business is not only fun, but there’s a gap for mid-sized companies between the mom and pops and the industry behemoths. “I recognized that we could acquire good brands that produce a good product that need capital and leadership for growth, which we can provide,” Levan says.

In January, BBX Sweet Holdings acquired Williams & Bennett, a Boynton Beach company that produces Belgian chocolate products sold by boutiques, big box chains, department stores, resorts, corporate customers and private label brands. Levan says, “We are actively talking to several other companies both in Florida and across the country.” BBX can now provide the capital to fuel further growth of Hoffman’s, which has 15,000-square-feet of manufacturing space in Greenacres.

Fred says the company is cognizant of global conditions that buffet the chocolate supply chain. “We are just as conscious as anyone else when it comes to proper farming and not using children in connection with the farming activities,” he says. “We have been very specific with the source of where we get the chocolate to continue to become more stringent.” Paul Hoffman continues to consult with the company on new products and the company’s production manager has been around for 16 years. Fred says the company is committed to upholding the quality that has earned kudos from the Wall Street Journal.

A lot of the business is labor intensive, such as double dipping the chocolate-covered pretzels – eaten by the last three presidents, Fred notes. Everything is hand rolled, hand cut and hand formed. One hot product these days is Coconut Cashew Crunch, a brittle type of product stuffed with cashews and coconut. It’s now in 120 locations and Fred expects to enlarge that to over 1,000. Expansion may include going beyond the five company stores, which Levan says is under study. Hoffman’s has experimented with holiday season pop-ups like the one at the Bank of America building in downtown Fort Lauderdale a few months ago. Business it seems, is sweet indeed.