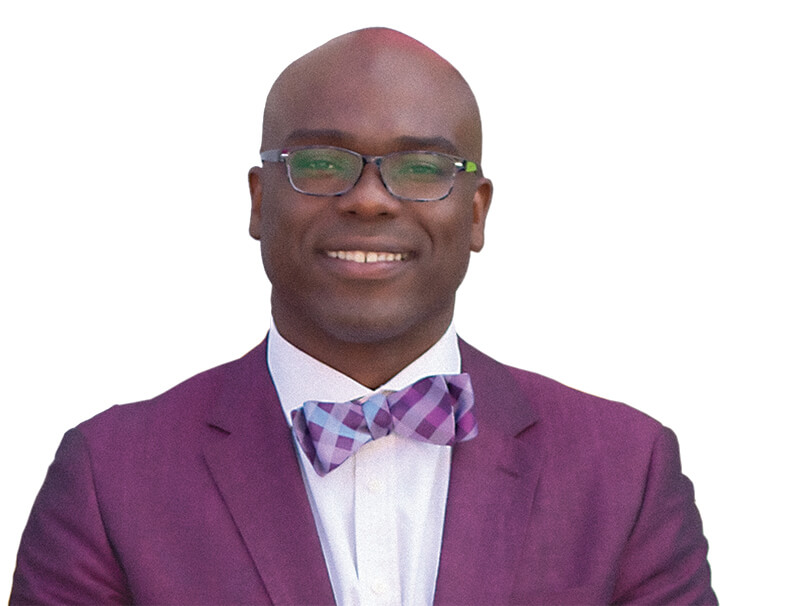 From NFL to Cannabis Entrepreneur

When Hervé Damas was a kid, he wanted to become an astronaut. That dream never came to fruition, but his career trajectory still has been nontraditional anyway. Today, he’s a medical cannabis doctor and entrepreneur, having opened Grassroots Medicine and Wellness in Wynwood earlier this year.

Damas shared his story at a Cannabis LAB Miami event held at WeWork in Brickell City Centre, which was led by a professional networking group that hosts educational lecture series. (LAB stands for law, accounting and business.)

Growing up in Queens, New York, he was a self-described science geek and attended Brooklyn Technical High School, which offered a science and engineering curriculum. His hopes were set on getting into a space program, but that changed when he tried out for the football team his sophomore year. “Astronaut pay doesn’t pay as much as football,” he jokes. “So I gave up the dream of becoming an astronaut. I fell in love with the sport. It really grabbed my heart.”

He went from the seemingly impossible to the ridiculous, he says, and eventually landed a spot in the NFL, as a linebacker for the Buffalo Bills after playing ball for Hofstra University, where he was the team’s captain. “Around the game, there’s an old joke that when you show up as a rookie they tell you: ‘You think NFL stands for the National Football League?’” he says. “It stands for not for long.”

That didn’t faze him. He thought he could beat the odds.

But his NFL career lasted a year. He suffered from a severe knee injury, in which his lower leg was attached to his upper leg by only the skin, he says. He still thought he’d recover with surgery, but that experience led him down a different path—an interest in health care.

“This was in the ’90s. I remember going to the Erie County Library and looking articles up on microfilm,” he says. “I pulled up all these articles about knee surgery and reconstruction, and I started pestering the doctors about what we were going to do, that I read an article about this … and I read something about that.”

One of his doctors told him to look at a career in medicine. “I remember looking at him over my shoulder and thinking, “Dude, I’m going to play football for a few more years. I’m going to make it to the Hall of Fame. I’m a bad dude. Look, I’m really good at this stuff!” he says in reflection.

He never fully recovered and decided to go back to school to study physical education. That’s where he was introduced to yoga as he mended. He delved into wellness and understanding the human body and became an adjunct professor in health and exercise at the College of New Jersey, eventually moving into the role as the college’s wellness director for the athletics department.

His mother gave him a heart-to-heart talk about pursuing his dreams and finding happiness. “What are you doing with your life? I know you’re a professor and you run this wellness center at the college, but I don’t see the fire in you that you had when you were playing football,” he recalls her saying. “Weren’t you interested in becoming an astronaut?”

He told her he was too old.

“Well, aren’t you interested in the body? Why don’t you go be a doctor?”

He was 33 and making pretty good money, and wasn’t convinced. She pushed further, challenging his manhood, he recalls. “You never struck me as someone who is afraid of hard work,” he says she told him.

That night, he made the decision to go to medical school.

His mother had a reoccurrence of breast cancer and died in August 2004. He packed his bags and moved to Miami, enrolling in undergraduate pre-medicine courses at Florida International University at age 34.

“And then I started suffering from things I never had suffered with before,” he says. “Headaches. Insomnia. Anxiety. And the way I always dealt with things being a football player was to try to do physical things—train a lot.”

Then he had surgery for exertion compartment syndrome, which is a consequence of overtraining the body, he says. “I popped a Percocet [a pain reliever that mixes the opioid oxycodone with acetaminophen] and I had an out-of-the-body experience. I felt like, ‘What the heck is this? I cannot do this.’ The Percocet was terrible, then I took OxyContin, and I felt like I was going to die.”

A close friend suggested smoking marijuana for relief. Damas said, “No, I’m going to be a doctor, and that’s bad for you. You know how much trouble you could get into?”

But he acquiesced because of the pain. Was it going to be like a ‘Breaking Bad’ episode? he wondered.

“My heart was beating. Should I even be smoking this? I’ve heard bad stories. And then I smoked it, and it was an epiphany. It changed my life,” he says.

He was in his last year at the Medical University of the Americas, which has its campus in the West Indies, and was on track for a career in radiology.

“I slept for the first time. My pain was gone. My anxiety was gone. Everything was great, and the following day, I said to myself, if I ever get a chance to become a medical marijuana doctor, I will leave radiology, and I will do this, because yesterday I was in shambles and today I’m OK. I could imagine other football players getting help.”

That’s how he got into cannabis.

The opioid culture in professional sports, he says, is relatively loose and medicine is treated like candy. Prescription pills are readily accessible.

“We would self-medicate with Advil, Tylenols and aspirin. And when I say ‘headaches,’ I mean debilitating headaches. The pain was just unbelievable. Then you go to college, you got scholarships and those aren’t guaranteed, every year you’re evaluated. We were getting shots at halftime, before games,” he says.

Concussion protocols didn’t exist when he played. “We had guys who had concussions in college. The training staff would say, ‘If he gets another one, they shouldn’t play anymore,’ ” he recalls. “We would get another one and we would hide it.”

In December 2017, he began recommending medical marijuana to patients after Florida legalized it. In the spring, he opened Grassroots Medicine & Wellness in Wynwood, which is a center for plant-based alternative medicines and wellness. Services include medicinal cannabis evaluations, yoga, meditation, Pilates, mental health counseling, massage, acupuncture and reiki. It also has a community space and an outdoor garden that can be rented for mingling and special events.

“My first patient was a former football player, and I do recommend it as part of a number of other things that I recommend,” he says. “I don’t recommend it for everyone, because it’s not for everyone. There’s not one thing that’s going to take care of everything that ails you.”

It is not only healing others that drives Damas. He wants to remove the stigma associated with medical cannabis.

“It’s OK to break the stereotypes that you aren’t a stoner—you’re responsible, you’re a parent, you’re hardworking,” he says. “I want to be in shopping malls. I want to go mainstream and I want to say that `This is OK. There is nothing wrong with this.’ I’m all in.” ↵