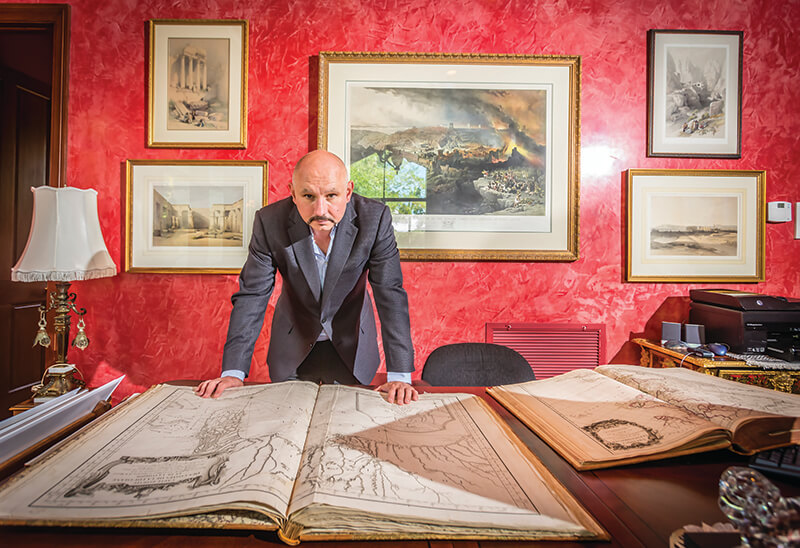 The many talents of entrepreneur Neal Asbury

The biggest question about Neal Asbury is what hidden talent can he discover next?

He didn’t discover his talent as an entrepreneur until he was close to 30. He then built kitchens for McDonald’s restaurants all over Asia and the Middle East. Now, his Legacy Companies in Weston has $250 million a year in revenue and brands focused on food preparation.

He didn’t discover his talent as a writer until his 40s. He now he writes for Newsmax.com and has authored the book, Conscientious Equity: An American Entrepreneur’s Solutions to the World’s Greatest Problems.

He didn’t discover his talents as a broadcaster until his late 40s, and now “Neal Asbury’s Made in America” airs on Armed Forces Radio and 90 radio affiliates nationally. He also has appeared as a guest on Fox News, CNBC, MSNBC, the BBC, and even RT, a network funded by the Russian government.

His latest iteration is being a historian, who can give lectures based on his large collection of historical maps.

Maybe it’s not so bad that his first career choice of being a pianist didn’t work out. Asbury talked his father into buying an upright piano when he was 13. By age 17, he attended a top-tier music school surrounded by child prodigies.

Fortunately, he had hitchhiked around Europe before his senior year, which gave him the idea of going into international business. He moved to New York City’s Hell’s Kitchen neighborhood—before gentrification, when life there was more aligned with its name, he says. He got a job at an export management company, opening the mail.

“I had the lowest of lowest jobs in the company, but I felt like I was on top of world,” he says.

A mentor recommended him to someone who didn’t want to spend much to hire a salesperson. So, at 23, Asbury was off to Singapore working for Inchcape PLC, a storied British trading company. Asbury said he traveled nonstop for seven years. He met his wife, an actress, in Manila, and seven years after arriving in Asia, he bought a stainless-steel manufacturing plant.

Despite the plant’s leaky conditions, McDonald’s called and he built kitchens for its first 1,000 restaurants in China. Asbury says he became the first company manufacturing food service equipment in Asia and selling around the world. In 1999, he sold his company to a public company in Chicago.

Asbury said he became tired of dealing with corruption overseas, calling it a “sinister enabler of poverty.” Bureaucracies, untrained workforces and expensive logistics were other frustrations.

Asbury’s book details follows his life of being an idealistic young American going to Asia and being immersed in international trade and then seeing inequities and discrimination. His next book will talk about coming back to America, establishing factories and how he addressed the problems he encountered.

Asbury is helping lead the “reshoring” movement of bringing manufacturing back to the United States. He says the United States isn’t perfect, which is why he started writing and broadcasting his views on policy.

“If you sit around and complain, you are no better than anyone else,” he says.

After a guest appearance on a local radio show, he began his own program on WZAB-880 AM (“The Biz”) in Miami. A friend took a tape and gave it to Radio America, which offered him a national show.

He has a studio in his office and production is handled in Washington, D.C., by the network.

In January, Asbury found out that the American Forces Network was picking up the show, which means it will be available on military bases and ships worldwide.

“To sit here and do what I’m doing and know people are listening so far away is stunning in one sense and it’s overwhelming. It makes me want to do better,” he says.

At heart, though, Asbury is an entrepreneur. His company makes products from raw materials and sells them in more than 100 countries. He says the pendulum swung too far with America buying everything and not making everything.

A key part of succeeding as a U.S. manufacturer is having skilled workers who can use technology, he says. He thinks the tax rate cuts in the Trump budget will help bring more money back into the United States and is a sign American entrepreneurs have been seeking.

Asbury has some robotic manufacturing in his Weston 127,000-square-foot headquarters. He has six buildings of that size scattered around the country.

Profit margins of his business lines are all over the place, Asbury says. He wouldn’t give specifics on profits, but says, “I’m very acquisitive. I bought six companies in last 18 months. That means I must be profitable.”

Asbury says he is working on deals that would more than double the size of his company. “It’s not a matter of if, but when,” he says.

He’s found that the size of his business is making it easier to attract capital. “There’s an amazing amount of capital coming into this economy. I’m going to attract as much as I can,” he says. He doesn’t give up equity, though; the capital is structured as debt.

Asbury values the history of his brands, which is reflected in the Legacy Companies name. Some of the companies date back to the 1800s.

“My job is to protect them, nurture them and take them forward… Then it will be someone else’s turn,” he says. His two daughters, Anjelica and Kyla, work in the business.

Then there’s the map collection.

That interest was sparked after he read The Great Game: The Struggle for Empire in Central Asia, a 1994 book by British journalist Peter Hopkirk about the Ottoman empire. He was in an antiquarian bookstore and it had a map of the Ottoman Empire from the early 1800s.

He was fascinated by how countries emerged over time and how borders have moved throughout history. He studied the history of the various countries he visited in Asia.

A Nova Southeastern University library exhibition displayed 160 of his maps, which were arranged in chronological order. Early maps have no details of the Midwest and the Far West because they had not been explored. On one map, the whole southeastern part of North America was called Florida.

One of his favorite pieces is the Nuremberg Chronicle, a thick German tome published in 1493. It combines biblical paraphrases and a history of the world. It is one of the first books to combine the printed word and illustrations with hundreds of wood block engravings. Religious authorities sought to destroy some copies, but Asbury has a copy that originally was owned by royalty.

NSU wanted a lecture to accompany the exhibition, and Asbury composed “The Discovery of the Americas and the Founding of the United States” himself. He ended up doing three lectures with the last one attracting an audience of 300. SFBW attended and experienced his educational, entertaining insight into the birth of the nation and how it evolved.

With all that he has going on, one might think Asbury is a workaholic, but he strives to keep a balance in his life, watching what he eats and exercising.

“So many people work so hard to get where they are and then fall over of a heart attack. How sad is that?” he says. He enjoys sports fishing.

He also still plays the piano. Sometimes he won’t touch it for months, he says, but then will go back to it and rip through 25 to 30 pieces.

That sounds pretty sweet for something that was his first big failure. ↵

Some of Legacy’s Brands

Chef’s Choice: Billed as the world’s largest maker of knife sharpeners. It was founded in 1985 in Avondale, Pennsylvania.

Excalibur: Founded in Sacramento, California, in 1973, it is known for food dehydrators.

Maxx Cold: Makes an array of coolers and preparation stations for sandwiches and pizzas.

Maxx Scientific: It makes coolers for the medical field, such as hospitals, labs and doctor offices, with remote temperature monitoring.

Nautilus: Water distillers that use evaporation and condensation to cut out contaminants.

Omega: Founded in 1985, it makes juicers and slushy machines.

Vinturi: Founded in Carlsbad, California, in 2007, it makes wine aerators.

Zeroll: Ice cream scoops invented by Sherman Kelly of Toledo, Ohio, in 1933 after he visited West Palm Beach and saw a struggling ice cream store worker. A liquid in the handle helps warm the scoop to make dipping easier.