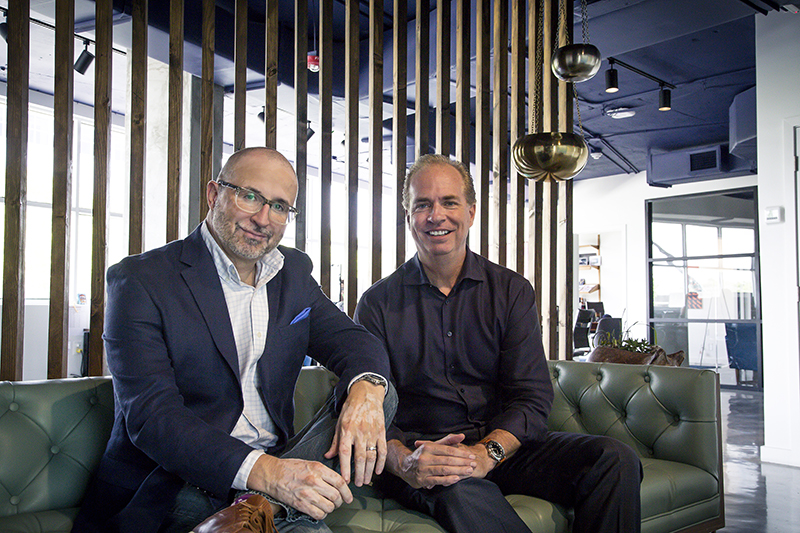 Two veterans of Crispin Porter & Bogusky, arguably the most notable advertising agency in recent Miami history, are finding success with Markham & Stein Unlimited, which has grown to 34 staffers and nearly $7 million in revenue.

During a 90-minute interview at their Coconut Grove office along South Dixie Highway, Markham and Steinhour provided insights into what’s effective in marketing now and the changes that have occurred in the world of advertising in general, and at Miami ad shops in particular. Unfortunately, the number of shops have dwindled and Crispin Porter is now headquartered in Boulder, Colorado.

Cronin started the agency in 2005, and had done stints as creative director at three agencies in Atlanta and Minneapolis.

Steinhour left Crispin Porter in November 2015 and thought he would take some extended time off, but that only lasted a couple of weeks. He realized he needed to do something that would be exciting.

Steinhour started helping Cronin with some requests for proposals and pitches. “We pitched two together and won both,” Steinhour says. Their partnership was formalized in January 2016, and they moved into their new rental office in October 2017, gutting it to create an airy hip space.

Their philosophy is one that almost any veteran in the business world could dream about: Not taking business unless they are excited about it.

They also want to be hands-on. “This isn’t a pitch team. We are principals of the firm and will be on the account. That’s made a difference in the last year or so,” Steinhour says.

Most of their clients have come through word of mouth. The largest client is Porsche Latin America, which encompasses 24 countries in Latin America and the Caribbean.

Markham & Stein is having to negotiate a challenging environment for ad shops. The unbundling of media in the digital era hammered full-service agencies in South Florida and sent a lot of business to New York.

Markham & Stein is benefitting with about 10 Crispin Porter alumni on its staff.

“Crispin was an amazing teaching place that are now populating a lot of agencies around the country. It’s almost a finishing school for creative, smart problem-solvers,” Steinhour says.

The velocity in the advertising world has hit warp speed these days.

“You have this furnace of social media that you have to shovel coal in,” Cronin says. “You have to have the next thing and the next thing. We constantly have to remind people that the basic elements of creating a strong brand and relevance for the target audience—the rules—haven’t changed. The tools have. You still have to have a great story. There has to be a point of difference.”

Agencies have to find faster, more-efficient ways to execute work, Cronin says. Instead of new TV commercials each quarter, agencies pump out four videos a month without adding resources.

Amid all the changes, agencies can serve as key consultants from a broad perspective.

“Ultimately, everything a company does is marketing, whether they realize it or not,” Cronin says. That’s whether it’s product marketing, opening a new division or even deciding what color to paint the building.

“Every successful agency turns a corner where clients stop coming to you because they need an advertising agency,” Cronin says. “They come to you because they want what you stand for and can do for them. They understand what the agencies bring to your brand that they can’t get anywhere else.”

Adds Steinhour: “You really have to do the research and dig into it. The world is now about information and information sharing and the consumer is in charge. Brands need to know who their target is and make messages curious so they will be shared.

Cronin says one good example of a brand with a voice is MoonPie, the iconic Southern sweet. A Dec. 18, 2017, article on Buzzfeed.com details examples of funny tweets, such as, “When you’ve been making MoonPies for 100 years, you might also make a few enemies, which is why we watch half an hour of karate videos on the first Tuesday of every month.” And when Hostess said Golden Cupcakes were the official cupcake of last year’s major eclipse, MoonPie responded with a simple, “Lol ok,” which went viral, Buzzfeed recounts.

Steinhour says branding can be tribal with fans cheering for brands and eagerly awaiting the next message.

Cronin says Yeti, which makes coolers, is an example of a tribal brand with Steinhour saying his wife has a Yeti hat. “It signals I am active and outdoors,” he says.

Yeti gained attention early on by putting a cooler in a pen with grizzly bears and then putting on a sticker that says they were grizzly proof—something that might be important in Wyoming, but also shows a sense of humor and toughness that appeals to customers more broadly.