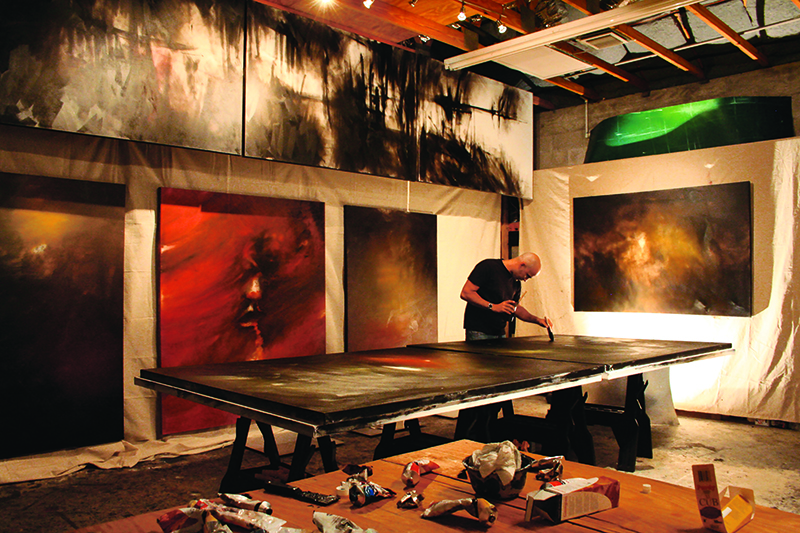 It’s late morning at the West Palm Beach offices of Garcia Stromberg | GS4 Studios and a catchy riff of reggae funk wafts through the air in Peter Stromberg’s cavernous workspace. As a visitor arrives, he’s hunched over a drafting surface working on a sketch and surrounded by monumental examples of his paintings scattered around the office. Off to the side is his row of guitars.

The setting is the first hint of how he blends art, music and architecture to create great places at his architectural firm.

The reggae funk turns out to be the work of a Jupiter band called Boxelder, which has been around since 1997 and ended up touring nationwide into the 2000s. The band never achieved total stardom, “but sometimes that makes bands stay really good and really hungry,” Stromberg says.

Stromberg, the firm’s president, says his father dabbled in guitar and he started playing by the fifth grade, focusing on classical guitar until seventh grade when he and a friend started a band called Syrinx, named after the “Temples of Syrinx” by the rock group Rush. Stromberg says he played through 12th grade, when he had to get serious about college. He ended up at Mississippi State University after his parents moved to Jackson, Mississippi.

After meeting his wife in college and graduating with a degree in architecture, he met Jorge Garcia at a construction site, where he was interning. The two became friends and, eventually, business partners.

During the early years of the firm, where Garcia is CEO, the guitars provided an atmospheric visual presence, but Stromberg didn’t start playing again until the architecture practice started taking off. He found another guitarist, a bass player and a drummer and started playing every weekend after his kids went to sleep. “It was ‘grab a bottle of whiskey and play everything from the Grateful Dead to Tool,’ ” he says. The group had some gigs in Jupiter area bars.

Despite a lack of formal art training, Stromberg discovered he liked to paint. He bought a four-car garage in Stuart that was converted to a paint and music studio. Garcia Stromberg was booming with about 80 employees, but then the Great Recession hit and the firm dwindled to a few people. One of the few positives was that he had plenty of time to play guitar and paint.

What he also found was a creative process where he would meld architectural sketching, playing the guitar and picking up a paint brush. He found the rhythms of the music could transfer to canvas and then to architecture. A painting, often done after carefully studying a project site, could set the mood and tone for a project. Stromberg started to create music to go with the animation in architectural presentations. Client projects would have a rhythm and tone, part of what Stromberg calls a “philosophy of life” design.

Clients like the art- and music-flavored presentations because it exudes a hands-on creative process rather than something spat out by a computer, Stromberg says. His art turned into a triumph. For example, one of Stromberg’s small sketches turned into a 15-by-15-foot painting that hangs in the lobby of 1000 Ocean at the Boca Beach Club.

Ecuadorian designer Adriana Hoyos used Stromberg’s artwork in her furniture catalogs and then hung them in her gallery. Stromberg participated in shows at Forré Gallery in Fort Lauderdale and Atlantic Gallery in Jupiter with other architects.

He also does sculpture work, such as using balsa and metals to create project models.

There’s a lot of back and forth in his multidimensional creative process. Concepts can go from sketches to scanned images. Sketches are sometimes superimposed on top of paintings. An architectural model might be taken out in the parking lot during the day to see how the angles of the sun highlight it, which can result in design tweaks and a sketch of the model. Ultimately, the studio can use Oculus Rift (virtual reality) technology to let clients get a 3D moving visualization of what it’s like to walk through a project.

Garcia says their mutual love of music is one reason he and Stromberg struck an immediate rapport.

Garcia says he and Stromberg don’t have grand design meetings, in favor of quick deskside discussions. They work fast. Garcia likes how he can philosophize and visualize and then Stromberg can take the ideas and put them into a physical form with his artistic abilities.

They have an eclectic taste in music that encompasses rock, jazz and country, which mirrors their ability to do architecture in a variety of styles.

“Sometimes people look at our work and they don’t get that we are not subscribers to any style,” Garcia says. “We know how to do an authentic Mediterranean home. If they want to do something that fits them like a glove, then we will fit them like a glove.”

There’s a lot of trust between the partners. Garcia talked about heading off to Panama for a presentation for a 26-story building. When he started driving to the airport, they only had one tiny sketch. He and Stromberg talked as Garcia drove to Miami International Airport. Garcia arrived in Panama and asked Stromberg how things were going. “ He says, ‘Kill some time. I need some time to get it done, scan it and print it in their office.’ ”

Garcia apologized to his would-be client saying, “I cannot believe I left documents at the office.” (He says he later confessed.)

The client’s architectural staff printed Stromberg’s electronically transmitted work and Garcia proceeded to present a final design that he hadn’t seen beforehand. “I walked through it like I had been through it the last five hours,” Garcia says. ♦