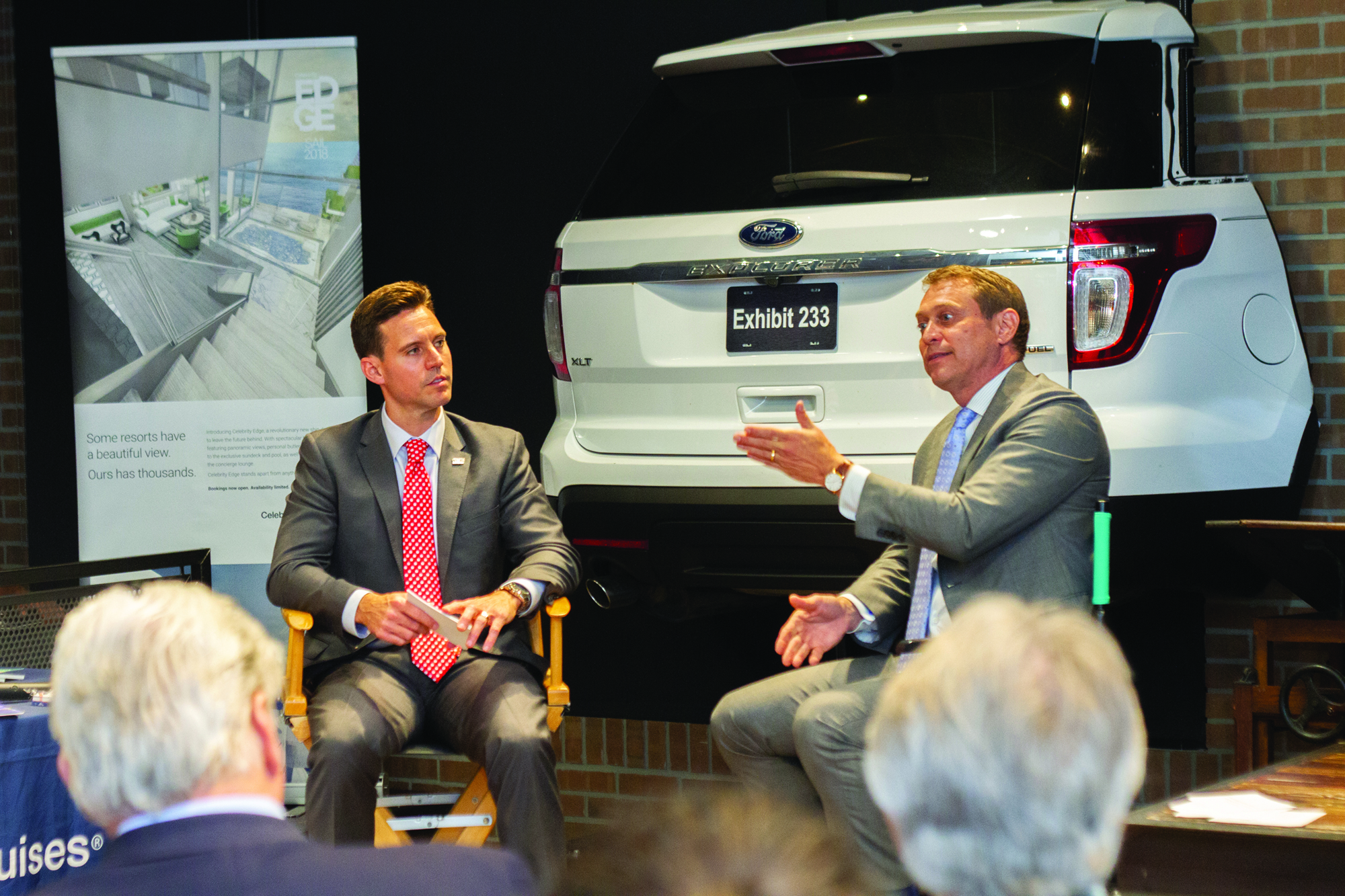 John J. Uustal is a trial lawyer and co-founder of Kelley/Uustal, a leading catastrophic injury and wrongful death law firm where he leads a team of 24 lawyers, paralegals, investigators and staff.

Uustal handles complex and difficult cases against top defense attorneys, accepting only a handful of cases at a time to give each one individual attention. His successes have resulted in safer fuel tanks, safer seatbelts, safer medical care, and safer equipment for firefighters and paramedics.

Uustal enjoys taking cases other lawyers consider too risky or too complex. He says his greatest victories have been in cases that were turned down by other law firms and in cases where the perpetrator seems obvious but he found other hidden culprits.

In one of his first car crash cases, he obtained a $51 million verdict and helped make national news when he discovered a corporate scheme to cover up the real reason people were burning alive inside General Motors vehicles.

Uustal’s accolades include being named Product Liability Lawyer of the Year in America’s Best Lawyers from 2008 to 2018, one of the Florida Super Lawyers from 2009 to 2018, and one of Florida Risings Stars in 2009. He’s also a board-certified civil trial specialist, Avvo-rated (superb/perfect) and AV-rated by Martindale-Hubbell (highest rank).

Before starting Kelley/Uustal with Robert W. Kelley, Uustal was judicial clerk for Peter Fay, a judge on the 11th U.S. Circuit Court of Appeals.

Uustal earned his law degree from the University of Miami, where he was involved with the school’s Law Review. He started law school one day before Hurricane Andrew hit South Florida in 1992 and finished the year at the top of his class, despite a shortage of electricity and phone service and having to study on a condensed class schedule. He holds a bachelor’s degree in foreign service from Georgetown University.

Professionally, he’s a member of the Summit Council, the Florida Justices Association board of directors, the Broward County Bar Association as appellate section chair and trial section chair, and Martindale-Hubbell’s Register of Preeminent Lawyers.

In addition to his contributions to the legal field, Uustal devotes time as a coach for the Fort Lauderdale Select soccer team. An avid soccer fan, coach and player, he was one of the few Americans selected to play in Washington, D.C., for the Italian embassy’s team.

For this edition of SFBW’s “CEO Connect,” Associate Publisher Clayton Idle interviewed Uustal at Kelley/Uustal’s headquarters in Fort Lauderdale. The transcript has been edited for clarity and brevity.

You have a great facility here. How did it come about?

When we started out, we were in a very old building by the state courthouse and it was a real advantage because we could walk to lunch and back to the office after court. We considered the 110 Tower off Broward Boulevard in downtown Fort Lauderdale, which is a great space, but it is not appropriate for our clients. Many of them have been injured and are in wheelchairs. So, we went ahead and looked for something that could be built. Our office now has a unique look with an industrial feel, which we love and fits us, because we consider ourselves to be a different type of law firm.

What led you to law school?

My dad was a coach, and my mom was a teacher. I wanted to help people. Perhaps after my third year of law school, that might seem like a naive thing, but I think most people who go to law school have that thought in mind — they want to help people. And it’s well known that many lawyers are very unhappy in the law. There is a high rate of depression and alcoholism. It can be an unhappy job.

I think because most lawyers end up not doing things where they’re relating to an individual person. Maybe they pursued a path for the money. I’m lucky that I represent regular, real people and I get to talk to people in the courtroom. I got lucky to have moved into a space where I’m helping people. It’s why I went to law school.

What can you tell us about the history of your firm and your background with Robert Kelley?

Right out of law school, I clerked for a federal judge, and then I worked at another law firm that Bob was already at, and the first case we tried was about two years after I got there, because, when I got there, he said, “Don’t work on anything but this case,” which was General Motors. It ended up being a big verdict and it was on “60 Minutes.” We tried that case together for six months. It was the longest trial in General Motors history.

My first child was born during that trial.

Anyway, some secret documents came out that GM had hid for 10 years, and there really aren’t post-collision fuel fires since that verdict. What we do is change the math. If it’s less expensive not to fix a defect, then in my experience, it doesn’t get fixed until it’s more expensive to let people die. When it becomes more expensive, they change the math and then they fix the defect.

You have had some huge wins against the nation’s biggest auto manufacturers. What’s that like?

There were no known defects when SUVs first came out. They were insanely lucrative because the companies just took pickup trucks, and put a roof on the back and put some seats in. They weren’t designed to drive at highways speeds safely and they rolled over all the time. But they were cheap pickup trucks and they were making a 50 percent profit on the final sale. They were making so much money and they didn’t fix it.

SUVs don’t really roll over anymore, but any vehicle can roll over if the tires get tripped. But, back then, SUVs would roll over just from steering on flat, level, dry pavement—for years. So, in fact, a lawyer told me the other day that she was driving on [Interstate] 595, and she had hit an alligator and she rolled over. She said that her car saved her life. I thought, “Well, a jury saved your life.”

They did because [the carmaker] would have never fixed that problem until it was more economically cost-effective to do so.

You have three kids. You love coaching. You like grooming young lawyers as well. Could you speak more about that?

What I said is, we have the best young lawyers of any firm that I have known, and, partially, that is luck. But also it’s because we still go to trial, and that’s becoming rarer and rarer. Lawyers who really want to step into the courtroom and want to have the skills to represent a regular person and go against some of the biggest companies in the world and win—there’s not that many places where you can learn it anymore. We have phenomenal people who apply here, and they are amazing. We believe in investing in training. My partner, Bob, is well-known around the country because he pioneered a way to do jury selection.

You also handle medical malpractice cases, and your website says 90 percent are settled out of court. What shapes that dynamic?

Well, first, you must understand probably 99 percent of other cases are settled out of court. So, malpractice cases get tried far, far more than other cases. I’ll try to give you the short version of this: For every 100 calls we get from someone who thinks they are a victim of medical negligence, probably half are not.

Say the doctor treated them badly and they’re not sure what happened, and they just want answers. Medical malpractice is one of the leading causes of death in this country, especially in hospitals with medication errors and things like that. Of those 50, we take one. Forty-nine, we have to turn down because of the laws in the state of Florida.

I’ll give you an example. I got a call from this lady and she sent me an X-ray. About 4½ years ago, she had a surgery and, since then, she’s been in very serious pain. She had to stop working. She had trouble going out. She had trouble driving cars, so she went back to the doctor. They did some CT scans. Nothing was found.

Last month, she went to another doctor and they did an X-ray and they had found out that they left a big piece of metal in her. But there’s a strict four-year deadline in malpractice. So, the doctor, I suspect, knew. That’s why he didn’t tell her, because he was waiting for that four years to run.

The laws are designed to make it difficult to do medical malpractice cases and the ones we take, the injuries are severe enough that recovery can be big enough that it’s worth it. It costs hundreds of thousands of dollars, which gets paid out of the recovery, so you can take a case where the costs are such that if the client gets nothing, they wouldn’t be happy. Plus, we need to get a fee on those cases or we’d go out of business.

So the fact that nine out of 10 of them settle is not surprising. The reason it’s not higher is because in trial, juries are very likely to give the benefit of the doubt to the doctor. Probably not inappropriate if you think about it, but some 89 percent of medical malpractice trials are won by the defense.

You know they almost put us out of business on that case. If I ask how many people think a smoker should be able to recover against the tobacco company for smoking … let me say it in this context: When I asked a jury panel that during the first time I tried a tobacco case, almost everyone raised their hand that they would never find in favor of the smoker in a circumstance like that. I thought, Oh, my God, we can’t win, but then they heard the evidence. It will take your breath away. I mean it’s just pure evil.

Tobacco companies know that their profits depend on [several] things. The number of experimental smokers they can create, mostly through targeting kids because someone middle-aged is not going to start smoking. But one out of three experimental smokers become addicts, so if they can increase the conversion rate to addiction, then they can increase their profits. On the hand, when addicts quit, they lose profit, so they make it harder to quit. They freebase the nicotine. When the patch and Nicorette came out, they tried hard to put them out of business.

It’s rewarding to take those cases, but they are very difficult cases because they have the best lawyers in the world and will take it all the way up to the Supreme Court. ♦