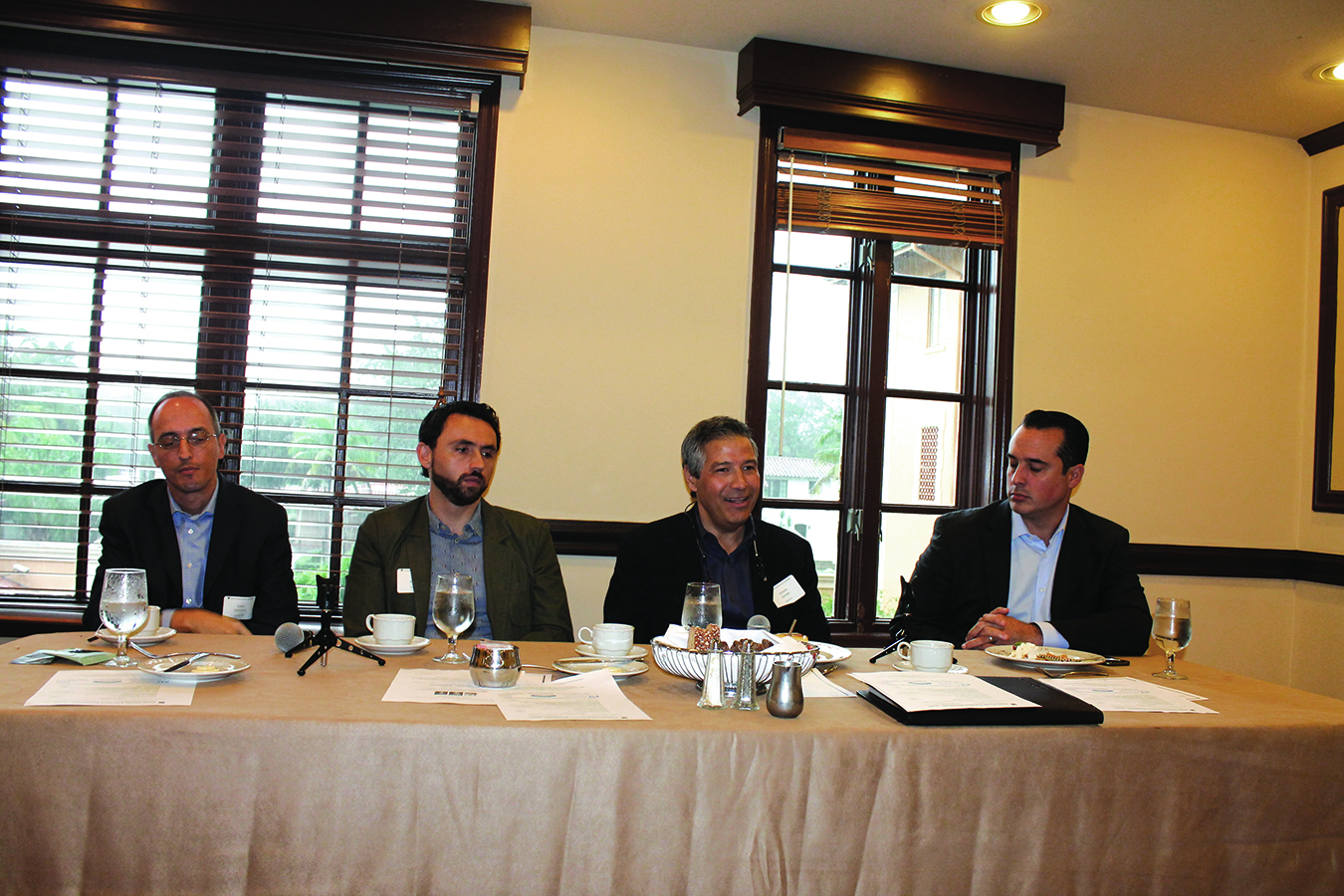 It still doesn’t hurt to treat a job candidate to dinner at Joe’s Stone Crab, but there are plenty of other ways some of the most entrepreneurial companies in South Florida are growing. Leaders of CareCloud, Fresh Diet, Rokk3r Labs and HolaDoctor took part in the “Why South Florida?” panel assembled by the South Florida Executive Roundtable. They talked about the allure of growing a company in the region – and also some of the challenges. The panel at the Biltmore hotel was moderated by Cherry Bekaert South Florida Managing Partner David W. Appel, who has grown the practice from zero to 150 people over the past seven years. SFBW was a media partner in the roundtable.

Juan Molina, VP of strategy and chief evangelist of CareCloud, told how the Web-based health care software and services company has grown to 49 states and 52 specialties since its founding in Miami in 2009. Venture capitalists once wanted CareCloud to move to San Francisco or Silicon Valley, but, “We put our foot down and said we love South Florida,” said Molina, who was part of the original team.

The company has attracted significant talent from outside the region, including a CEO from San Francisco, a chief sales officer from Boston and vice presidents from Boston and Colorado. The company just hired four interns from Austin, which is home to the University of Texas. Taking candidates to Prime 112 or Joe’s Stone Crab on Miami Beach are always good selling points, Molina said.

The region is a natural for health care businesses since the area is a national epicenter, Molina added. The culture and environment here is very entrepreneurial and “will do what it takes to get the job done.”

The area could use more engineers and experts in product marketing, he said. He would also like to see universities do more outreach, since it’s difficult for businesses to know who to approach.

CareCloud is one of the region’s top success stories in venture capital, having raised $73 million. “What Miami is lacking is those multiple exits,” Molina said, using VC terminology for a positive outcome, such as an investor recouping money via a stock offering or the sale of a company. “Once you see a steady cadence of that, you will see the ecosystem flourish.”

Another example of a potential outcome could be coming from Fresh Diet, which is looking to be spun off as a public company in the first quarter of 2016 by parent Innovative Food Holdings (OTCQB: IVFH) of Bonita Springs. Institutional investors have agreed to provide $1 million in funding. Fresh Diet CFO Vojkan Dimitrijevic said the North Miami company operates in about 44 metro areas in 12 states. The service offers doorstep delivery of fresh meals and snacks for $34.99 a day under a monthly plan.

“I found Miami to be very welcoming and open,” said Dimitrijevic, who previously lived in Washington, D.C., and Florida’s Gulf Coast. “There are a lot of international people, so you get to have fun and meet a lot of interesting folks.” Dimitrijevic also likes the expertise of the region’s lawyers and said universities are another good source of talent, once you figure out how to navigate them. One negative is that the company sometimes runs into cost of living issues for companies transferring into South Florida.

Roberto Estrada, co-founder, president and CEO of HolaDoctor, who is from Nicaragua, moved to the region a year ago to help his company grow business here and Latin America. HolaDoctor, which has an office in Miami, operates the largest Spanish website in health care, similar to WebMD, and manages Univision’s health website. A year ago, HolaDoctor entered the health insurance brokerage business and has also opened stores to sell health insurance in New Jersey.

Estrada loves Miami. “There’s a lot of good talent in terms of editorial Web content development and digital marketing,” he said, noting that there’s been a bit of a challenge on technology hiring, such as finding software engineers and applications developers.

Estrada was enthusiastic about a city of Miami program that provided about 20 previously unemployed people for HolaDoctor’s call center. The program pays up to 75 percent of their salaries for the first three months.

Estrada thinks the amount of funding for entrepreneurial companies is pretty robust these days. “There is a lot more money chasing deals than deals chasing money right now,” he said.

Rokk3r Labs of Miami Beach not only invests in startups, but helps them leverage technology, said Juan Montoya, who is co-founder and chief operations officer.

Montoya, who has spent most of his career in the Northeast, likes the local business climate. “In the good sense of the word, there are so many hustlers here who get things done,” he said. “You realize very quickly it’s a great place to start and grow a business – especially since there are so many great connections to Europe and Latin America.”

He said one challenge is that some potential angel investors, such as wealthy foreigners, are more focused on real estate. An early-stage idea that might get someone excited in Silicon Valley is a tougher sell in South Florida.

Montoya outlined the ways Rokk3r has been creative in building its workforce and relationships with universities. It has hired a handful of students from Venture for America, a program that helps train young people to be entrepreneurs. Rokk3r helps judge a contest at Wyncode Academy, a coding school with locations in Wynwood and Fort Lauderdale, which can lead to a job offer for the winner.

Rokk3r has also established a relationship with FIU’s MakerBot Innovation Center, which has a network of 3-D printers. The company has three apartments in Miami Beach and every few months brings in a fresh group of students from Ontario’s Waterloo University, which has a co-op program.

Rokk3r can be alluring to those who want to be part of an entrepreneurial endeavor, but can’t afford the financial risk, Montoya said. They can be part of a founding team if one of Rokk3r’s portfolio companies takes off. “If it doesn’t, there are 20 more in the pipeline.”