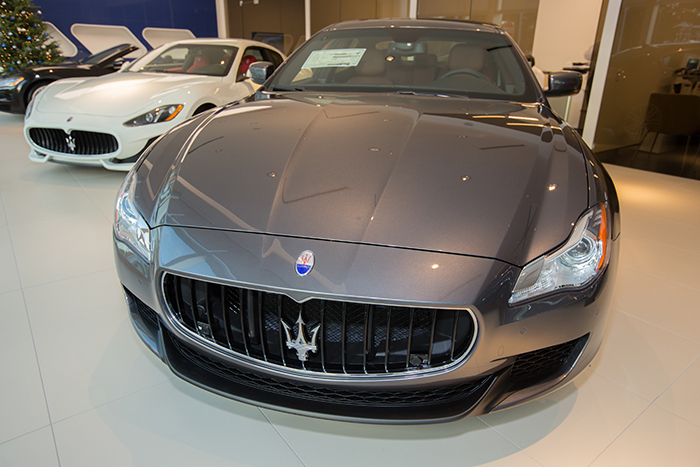 Rick Case was walking around the Concours d’Elegance in Pebble Beach, thinking about how he could bring the event to South Florida, when he ran into Jay Leno. “I saw him walking around and approached him and said, ‘I’m starting the Boca Raton Concours, why don’t you come down?’ Leno’s initial response? ‘Isn’t that where the old people are?’”

Leno not only came to the first and fifth, but he’s back for the 10th edition of the Boca Raton Concours to honor show founders Rick and Rita Case with the 2016 Automotive Lifetime Achievement Award. The other honoree is Stephen Cannon, president and CEO of Mercedes-Benz USA.

“Rita and Rick are a true dynamic duo, dear friends and real pioneers in the automotive industry,” says event chairman James E. McDonnell IV. “Stephen is forward-thinking and an asset to the automotive industry’s growth. We cannot think of more deserving recipients of these signature Boca Raton Concours awards.”

When Case was 14, he fixed up an old Ford and sold it in his parents’ driveway. “I made more money than I made on my paper route in a year and I said, ‘That looks good to me,’” Case told SFBW in December when he opened a new Maserati dealership in Davie, the 16th dealership in his automotive group. The dealership was ranked the top Maserati dealer nationally in its first month. (Visit SFBWmag.com for a story on the Maserati dealership.)

Case started buying more cars and fixing them up. “I opened my first used car lot when I was 19. That was the start,” he says. “I opened another one and then I started getting into new motorcycles. Honda had come out with motorcycles and they were supposed to come out with cars, and I wanted to get in on the ground floor.”

In 1967, he opened his first new car dealership, selling Toyotas. He had 14 motorcycle dealerships in Ohio’s major cities and then fulfilled his quest to get a Honda car dealership. He was the largest Honda dealer the first month and the first year in the U.S.

Rita’s family had a Honda dealership in Santa Rosa, California, and the couple met at a 1977 dealers meeting. “We were the only singles at this Honda meeting,” Case says. “It was a meeting of 20 dealers that got together three times a year from other parts of the country.” The two were married in 1980.

At that time, Case was the only motorcycle dealer able to have Kawasaki, Suzuki, Honda and Yamaha at one location. He sold the motorcycle business in 1985, a year after Honda told him it was coming out with a new luxury brand: Acura.

Because Case was the largest Honda dealer, he was given a choice of where he would put his Acura dealership. He looked at a few Sunbelt markets and eventually chose Plantation, which wasn’t far from the couple’s second home in Fort Lauderdale. In March 1986, he opened his Acura dealership, which neighbored a Hyundai dealership he’d opened a month earlier.

In 2002, the Cases started making their mark along I-75 in the Weston/Davie area with another Honda dealership. It became the largest-volume Honda dealer in its first month and currently holds the record for selling 1,222 Hondas in a single month. Case also has the Acura record of selling 376 in a month.

At eight stories high, the Rick Case Volkswagen dealership was hailed as the tallest in the world when it opened in 2013; it is the German car company’s largest at more than 328,000 square feet.

Rick Case Automotive Group celebrated its 50th anniversary in 2012. The following year, it was named Automotive News’ only 2013 National All-Star Dealer in the privately held dealer category, which encompasses 17,000 dealerships.

How did Case accomplish all that growth? “I think it’s our culture,” he says. “We treat every customer as we would our best friend.” Case goes into depth on the topic in his book, “Our Customers, Our Friends: What 50 Years in Business Has Taught Rita and Rick Case About Sales Success and Community Service.”

At the book title indicates, the Cases are also big on giving back to the community. The Boca Raton Concours was started as a fundraiser for the Boys and Girls Clubs, the same reason he started the Fort Lauderdale International Auto Show and the Yachting Rendezvous, which has raised more than $31 million.

Case says that before he moved to the area, the Boys and Girls Clubs of Broward County were told that he was doing a lot of charitable work in Ohio. “They pounced on me when I got to town,” he says with a grin, happily adding that the Broward Boys and Girls Clubs organization has gone from only three clubs to 12, serving over 12,000 kids and having a budget of over $12 million. Fittingly, the one in Davie is known as the Rick & Rita Case Club.

• Jay Leno and other celebrity judges will select the finest vintage, antique, classic and exotic vehicles based on period, presentation and overall style for the Sunday Concours.

• For additional information and full schedule of events, visit bocacde.com.