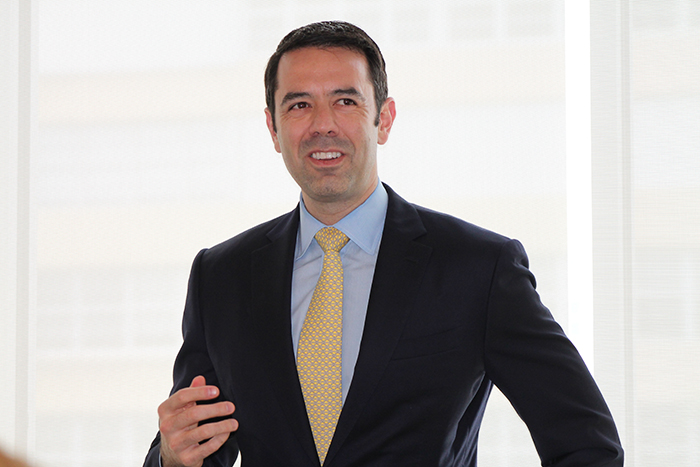 Stupidity and the Stock Market

Wealth strategist Mike Sorrentino has a simple explanation for the stock market’s erratic nature: “It’s been almost unprecedented, the sheer stupidity in the market.”

Fear, panic, greed and stupidity are driving the market, he says. However, investors should understand that volatility doesn’t equal risk; it’s just a measure of emotion.

Sorrentino, who is based in New York City, appears on national financial media as chief strategist for Global Wealth Management (GWM). He recently spoke at a lunchtime event organized by GWM at the new Fort Lauderdale Audi dealership.

Dips can present buying opportunities for investors who have their eye on a particular stock, he says. For example, if Apple (Nasdaq: AAPL) is down 15 percent in a day, it doesn’t reflect any actual change in earnings.

Sorrentino says he focuses on investing in the right sectors, since his research indicates 95 percent of success is based on doing that rather than figuring out individual stocks. For example, rather than bet on a few biotechs, he would rather use the iShares Nasdaq Biotechnology ETF (Nasdaq: IBB), which has a basket of stocks in the Nasdaq biotech index.

“ China: In the long run, China letting its currency float is a plus as it turns into a consumer economy.

“ Oil: The drop in prices is good for consumers and the U.S. economy. Electricity prices have dropped 15 percent, which is helping fuel a return of manufacturing to the U.S. from overseas.

“ Interest rates: Sorrentino does not expect rates to rise this year, but if they do, the Federal Reserve believes the economy is healthy enough to withstand them. Savers would benefit from higher CD and bond rates.

Dr. Angie Ki, who recently moved to Miami after 24 years living in North Carolina, says she felt welcomed right away. “Everyone has an accent,” she says, drawing a laugh from the audience at the Greater Miami Chamber of Commerce panel discussion, “China and Globalization: The Growing China-Miami Connection.”

A major question for the panelists was whether the recent market volatility and the slowdown in China’s growth would hinder efforts to cultivate Chinese interest in South Florida.

First, China is not an economic basket case, Ki says. China’s growth rate was recently forecast to be about 7 percent this year, which was well above the 2.4 percent expected in the U.S. “Do the math,” she says.

Asians also tend to think long term compared with Americans, and ultra-wealthy Chinese have diversified out of their homeland, anyway, says panelist Philip J. Spiegelman, a principal with condominium marketer International Sales Group. Earlier this year, his company formed a partnership with American Da Tang to help market new developments to the Chinese, including Via Acqualina 777 and Via Acqualina 888, whose numbers are considered lucky in Chinese culture, according to The Real Deal.

Panelist Anthony Kang, a partner with Arnstein & Lehr LLP, says Chinese buyers have bested Canadians as the top purchasers in the U.S. this year and are paying an average of $800,000 per home. The super-rich Chinese are established in California, but haven’t reached South Florida yet, he says, though he does see many South Florida businesspeople taking trips to China, as face-to-face meetings are important in building trust.

The panelists say there is still work to be done on creating infrastructure here, including direct flights to Asia, banking relationships and fairer treatment on foreigners getting car insurance and mortgages. “China is ready for Miami,” Ki says. “The question is: Is Miami ready for China?”

Organizing fun charitable events has been a labor of love for breast cancer survivor Tammy Gail and her team at the nonprofit Glam-A-THON.

Coming up on Oct. 17 is The Strut, a zany high-heeled fundraiser that’s been organized for the past nine years with the motto, “Divas don’t sweat, they strut!”

This year’s event, where heels of every height and pooches of every breed are embraced and admired, is scheduled from 11 a.m. to 3 p.m. at Esplanade Park in downtown Fort Lauderdale.

Guys are urged to “walk in her shoes,” with or without heels, to be part of the fundraising festivities. Participants will enjoy seeing an array of shoes created by artists and proceeds benefit the Broward Health Foundation. For more information, visit glam-a-thon.com. ?