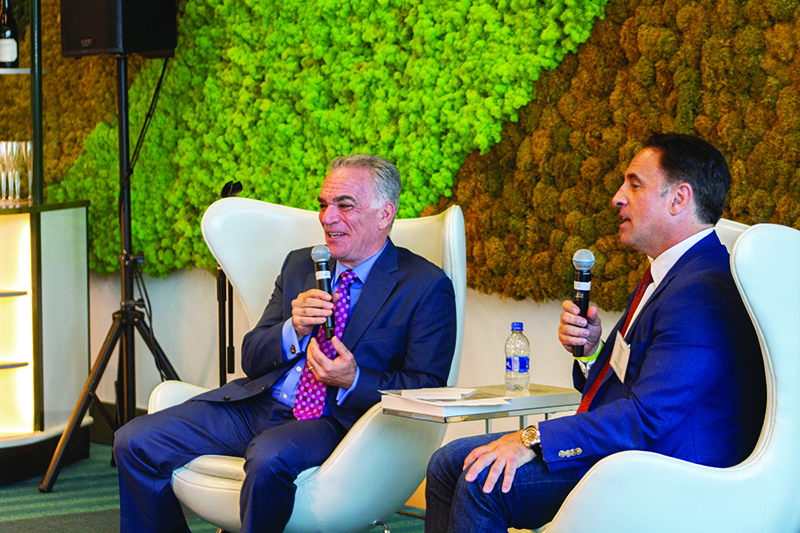 Albert Santalo, founder and CEO of 8base, is a computer scientist, internet entrepreneur and angel investor with experience in high-growth, venture-backed technology companies. His passion is designing products and building companies that disrupt traditional business models.

8base, which was poised to come to market in October, is an application development platform that uses disruptive technologies, such as blockchain technology and artificial intelligence, to accelerate digital transformation. It’s designed so nonsoftware engineers can design systems. Santalo envisions 8base as a decentralized ecosystem that unites software authors, contributors and users.

Santalo is the former chairman and CEO of CareCloud, a company he founded in 2009 that is working to modernize health care with a cloud-based platform. CareCloud reached No. 127 on the 2014 Inc. 500 list.

The following transcript has been edited for clarity and brevity.

Why the name 8Base?

Base is database, which is at the heart of technology, especially business technology. Eight is the infinity symbol on its side. We think it’s a lucky number, and there are also eight bits in a byte.

A number of times you have taken ideas to fruition. What would you say is the most important part?

Grit is probably the most important thing. In business, especially entrepreneurship, you are faced with a lot of difficult situations and have to work your way through them.

Right now, we are at a critical time transitioning from prerevenue to revenue. It’s hard because you have nervous engineers who are doing a great job. So, they are like, “It’s prime time. It has to work.” I’m not concerned about that. There are things in the company you have to do: customer service, selling on a repeatable basis and more marketing. We’re in the middle of a fundraising cycle. It’s a lot.

What made you decide to do 8base?

I’m an engineer by background. I started my career 30 years ago, writing code on mainframe computers. I’ve been part of that client server technology. I’ve been in every role you could imagine, including a developer myself.

I always felt like I was building the same system over and over for health care, financial and the web. The industry didn’t matter, it felt like same stuff over and over again. It’s a great expense, there’s dissatisfaction and who wants to pay? It costs a lot of money.

The concept behind 8base is, we make enterprise software into a platform that we can leverage. It has a beautiful user interface that most people can understand. It allows business people to build software without developers.

Why has this not been done before?

It sort of has. The best example is Wix, an Israeli company that started in 2006 and is now publicly traded. What they do is allow people without web development skills build websites. What we build is business systems, not websites. People who do what we do are with older companies built on old technology. They wasted their time because they are outdated. All tend to be unicorns and all tend to be worth $1 billion or more. There are not many and they can get disrupted.

8base has better technology, a better feel and a better model. They have a long sales cycle, with 2,000 global customers.. There are 75 million small businesses in world. The way to access those is not knocking on doors.

Imagine the smallest company you could. If you know how to build a list of invitees for your wedding in Excel, you should be able to use 8base.

Business software today is a nonaccessible technology that people struggle with buying and building. By bridging the gap, we can be transformational.

Rather than a long lease like Salesforce, we allow you to build what you need and utilize 100 percent rather than pay for Salesforce and only use 15 percent

Will there be off-the-shelf modules?

There are patterns that we bring to the table, and there will be more and more. Hopefully, you see what we are describing as exponential. It’s an extensible platform so developers can build contributions and commercialize. The platform gets more powerful as time goes on.

What is a citizen developer and how do they fit in?

Someone who accomplishes software development without knowing how to code. Who knows Lotus Notes? It’s a 30-year-old technology built by citizen developers—those are people in business who have a need, but they don’t want to go to their IT department. You put it on your credit card and build it yourself. That’s the reason why Excel, Microsoft Access and Lotus Notes are pervasive. We have found big companies that have tens of thousands of these apps and can’t run without them.

You made a statement in another interview that all communities need to be digital. What do we need to do in South Florida?

That’s a hard question to answer. We hope to be part of the solution. I’ve seen communities make big strides like Austin (in Texas) and New York City. There’s no reason it can’t happen in Miami.

We have to make sure we have good actors here. Miami and South Florida are not known for the most-honest people. Honesty is important. I’ve had my share of pitfalls, but nobody has ever called me lazy or dishonest.

It takes a career to make a reputation and only a couple of minutes to lose it. We have to be very honest and good custodians of investor money.

Educational institutions need to produce engineers and keep them here. We need to teach entrepreneurship. Stanford and MIT [the Massachusetts Institute of Technology] are good examples. These models exists and we should imitate them as best we can.

There’s a bias in South Florida, that they only want to invest in businesses with revenue. That’s a bit of a Catch-22. If you are a venture capitalist and invest in a company that has revenue, that’s probably not the greatest company. Those people will go to Silicon Valley. The angel investor community has come around and gotten better, but people have gotten burned. We need to make it easier for people to invest. Tax incentives could help.

You have to have the right background and ability to deliver products in a reasonable time. You have to demonstrate that you are going to be able to commercialize. Too many people pick a few of those things. Venture capitalists are all about excluding stuff. Getting through that filter is hard, so you have to leave nothing to chance.

What’s your philosophy on building a team?

I’ve screwed this up as much as I’ve gotten right. You can’t do it alone. You have to have the right people around you. I can’t emphasize enough the importance of the first follower. From there, it’s about finding the right people to fulfill the best roles in your company. This is where I would say I haven’t always gotten it right, but I am still trying.

You could ask a fair number of entrepreneurs, “What is your biggest mistake?” They would almost always say a people decision. “I didn’t fire someone fast enough,” they might say. You have to surround yourself with “A” players, or it erodes the performance of the team. They start performing like “B” players or leaving the team. You have to tolerate nothing less than “A” behavior. It’s tough for entrepreneurs, because you tend to like people. You can see their success in your head, but it’s not happening day-to-day. This stuff is really, really hard. This is what makes or breaks a company

What is the importance of work/life balance?

My wife has been very supportive in good times and bad. I had my first kid at 18, which made it difficult to be an entrepreneur. I found a way to do it and took on great risks. Sometimes, my wife is less nervous. She has seen it all.

It can be hard to plan a vacation. Do we have enough money? Especially when starting my first company a month after 9/11 and a year after the dot-com bubble bust. I left a good paying job and invested my own money.

Where did you find the courage?

I was probably a little selfish. I tend to be a little self-critical. I know that I’m going to eventually die. I’ve come to grips with that. In the time I have, I need to do what I feel like I was born to do. I keep trying to do it over and over again and, hopefully, not hurt people in the process.

When I look back, I want to say I made the most of my life. What do you have to lose? I could have been born 10,000 years ago and been mauled by a bear. Instead, I was born in the U.S. at this amazing time. ♦