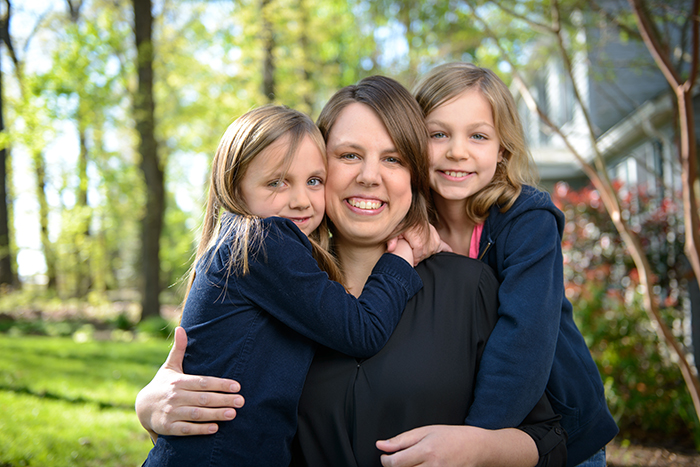 An Answer to Cancer

Christine Bray didn’t have much hope for survival when she was diagnosed with ovarian cancer in 2010. She had even less optimism about her future as she underwent conventional cancer treatment over the next three years. The mother of two young children experienced several recurrences, and by 2013, the cancer was widespread in multiple locations.

“There really wasn’t much hope at that point. I already had a close call in 2011, and I didn’t expect to make it through that summer,” says Bray, now 36. “My girls were nearly 1 and 2 years old when I was diagnosed and had seen me go through a lot as they got older. They were so sad that I couldn’t do the things with them that other mothers could do.”

When a friend told Bray about Boca Raton-based Cancer Treatment Centers of America (CTCA) and its unique approach to helping patients with end-stage cancer, she figured it was her last shot. At CTCA’s Philadelphia facility, Bray, who lives in Virginia, underwent advanced genomic testing, an emerging diagnostic tool that enables physicians to evaluate possible treatment options that may not have been previously considered. Through the identification of the root genetic abnormality within a patient’s cancer, physicians can often prescribe more individualized and targeted treatment options.

Based on the results of this testing, CTCA doctors were able to customize a precise treatment program to target Bray’s cancer, and the results were much different from those of any treatment she had experienced.

“They were able to first shrink it and then maintain that gain,” she says. “By October 2014, I was cancer-free and still am today. I truly feel like I have a second lease on life – and so do my daughters, who are now 6 and 8. I am so grateful and thankful that the doctors had another trick up their sleeve that could help me live.”

Genomic testing to help strategize cancer treatment is now considered by much of the nation’s medical community to be the future of cancer treatment. It’s the tool many doctors say will turn a disease that is often fatal into one that is mostly chronic – a huge step on the way to finding a cure. It’s based on the concept of focusing on the DNA of an individual’s cancer rather than in the organ in which it appears.

The medical community in South Florida is embracing the concept with numerous programs similar to that of CTCA’s new Centers for Advanced Individual Medicine, a resource that provides advanced genomic testing to clinically qualified patients recommended by their physicians. CTCA offers the services to patients worldwide through its network of hospitals in Atlanta, Chicago, Philadelphia, Phoenix and Tulsa, which specialize in treating patients fighting complex or advanced-stage cancer. The company offers an integrative approach that combines surgery, radiation and chemotherapy with nutritional counseling, naturopathic medicine, mind-body therapy and spiritual support to enhance quality of life and minimize side effects during treatment.

There are some types of cancer for which the use of genomic testing to inform treatment are routine, says Dr. Maurie Markman, president of medicine and science at CTCA. These include cancer of the lung and breasts and, more recently, melanoma. “For others, it’s an evolving process – we’re learning more every day,” he says. “The possibility of using advanced genomic testing to influence therapy should be a part of any discussion about treatment options. It’s an important part of the conversation.”

The technology used for genetic testing to determine the predisposition of specific types of cancer and for advanced genomic testing to inform treatment both derive from research in the federal government’s Human Genome Project, which was completed in 2003, says Jeff Boyd, Ph.D., director of translational research and genomic medicine at Baptist Health South Florida’s Miami Cancer Institute. Thanks to that research, genomic testing can now be completed within a few hours for a cost of less than $1,000.

Costs of tests expected
to drop to a few hundred

“The time and costs for the test are still decreasing, and we expect that it will cost just several hundred dollars within the next few years,” Boyd says. “Insurers and other third-party payers embraced testing for prevention much more quickly than testing the DNA of cancer that already exists. But they are now moving more quickly toward that as successful outcomes are shown.”

Boyd recently joined the Miami Cancer Institute to set up a new facility dedicated to being a Cancer Center of Excellence, mirroring the advances in genomic medicine and the services that can be provided as a result. Its target opening date is October 2016.

“There’s almost no area [within cancer] that genomics can’t help. It’s the key to why some people do well in treatment and how we can make a difference in outcomes. There are breakthroughs right now in pancreatic, ovarian and breast cancer,” Morrell says, noting that a more complex issue is when the best time is to run the test. “The results may be different if you run the test at one point in time and again at another.”

Morrell and her team of physicians and researchers are currently part of clinical trials for a drug that may help treat lung cancer in patients who have a specific mutation in a gene causing it.

“Patients are coming to us from all over the world,” she says. “We’ve had a remarkable response in patients who have failed to respond to other treatments.”

The Sylvester Comprehensive Cancer Center at the University of Miami Miller School of Medicine recently began enrollment for the landmark precision medicine trial, NCI-MATCH (Molecular Analysis for Therapy Choice), which seeks to determine whether targeted therapies will be effective in patients whose tumors have specific genetic abnormalities, regardless of their cancer type. The study, co-developed by the National Cancer Institute, will incorporate more than 20 different study drugs or drug combinations, each targeting a specific gene mutation instead of prescribing a drug based on the tumor location.

Programs for genetic and genomic testing can also be found throughout South Florida at medical facilities such as the hospitals within the Broward Health system; Cleveland Clinic’s Center for Personalized Genetic Healthcare in Weston; and Holy Cross Hospital’s Michael & Dianne Bienes Comprehensive Cancer Center in Fort Lauderdale. Other hospitals, such as St. Mary’s Medical Center in West Palm Beach, partner with cancer centers to offer testing and counseling programs.

“There has never been a time in medical history that has been as transformational for cancer treatment as right now,” says Boyd. “We are closer than ever before to providing an effective standard of care for cancer that replaces the old-fashioned cocktail of poisons currently used for the purpose.” ?