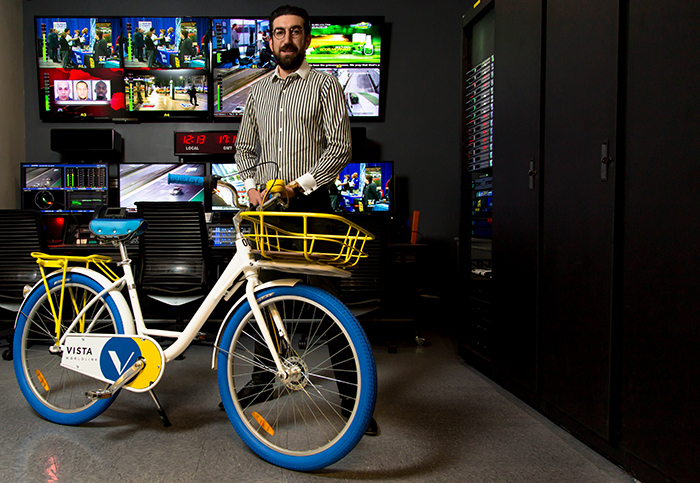 A pop of color – a blue frame, really white tires and a yellow basket – is what you’ll see when a Vista Worldlink bike comes pedaling your way.

Vista Worldlink, a satellite and fiber optics transmission company, is following in the footsteps of companies such as Google and Nike with custom bikes that are shared by employees.

It’s part of an overall boom in biking globally and in South Florida.

There is a growing number of public bike-sharing programs in South Florida, and the region’s mass transit systems and urban development experts are incorporating more bikes into their planning.

Like the West Coast companies, Vista Worldlink partnered with Republic Bike of Dania Beach to initiate its program, which is fun for employees and increases brand awareness.

The program is the creative idea of Vista Worldlink’s Vice President Josh Liemer, who is an avid biker himself.

�Coming off a bicycling trip energizes me and, similarly, I hope to energize my staff. These bikes really stand out and we are exited to put them in the hands of our employees so that they can enjoy their workplace a little bit more,” says Liemer.

The tech company and Republic Bike met three years ago when they moved into the same corporate park in the Dania Beach area. Republic Bike has corporate bike programs and a website (republicbike.com) that allows users to design their own eye-catching bikes for $399 each.

“We thought about some ideas of how to work together. I felt why not create a beautifully designed bike that incorporated our brand identity to do errands or lunch or simply to get out of the office for a few minutes to recharge our batteries,” Liemer says. “We discussed a few designs and then created the program from there. It was also good to embrace another local South Florida company.”

The concept is a good way to promote health, camaraderie and fundraising, says Lenny Chesal, CMO and executive vice president of business development of Boca Raton-based Host.net. “We haven’t started an official employee bike program per se, but several of us have embarked on bike riding in earnest. I think any outside activity that promotes health and community participation is good for the individual. It’s great to work toward something bigger than just the company’s goals.”

Chesal feels that bicycling is probably the easiest and most fun exercise because riders can enjoy the fresh air and meet new people.

“The whole biking community has grown immensely in South Florida. And there are lots of events. Even if there is one person in the company involved and your company knows about it, people donate to the cause,” Chesal states.

Both Vista Worldlink and Chesal have one major concern, though, and that is safety. Vista has set a number of guidelines and safety regulations for employees and also limits how far they can go.

Safety is a concern in South Florida due to so many elderly drivers and young people who are texting and driving, Chesal says.

“Bicycle safety is really, really important. There is awareness of it, but there needs to be more bike trails and lanes, more emphasis on a statewide and national level to improve safety,” he says.

Bike sharing is being accompanied by urban design that makes streets more friendly to cyclists.

It’s contributing by focusing on “the last half-mile” – the distance between mass transit drop-off points and homes or businesses. Walking, bicycling and catching trolleys are some of the modes of transportations that urban planners consider these days.

Cities including Pinecrest and Coral Gables are now looking at the broad scope of multi-modal transportation.

Although there are varying opinions on bike safety, Dover says there is safety in numbers.

“Even more important than the stripes on the road or regular signs reminding people to share the road, it’s important to have lots more people choosing to go about on two wheels. After the biking explosion in New York City, researchers found that this was the single most important factor that improved safety,” he says.

South Florida’s prominent bike-sharing programs DecoBike and Broward B-cycle are doing their part to boost popularity since their inception in 2011. The programs utilize memberships that allow users to rent a bike at one location and return it at another.

Broward B-cycle has registered more than 900,000 bike rides since its inception in December 2011. It has 275 bicycles at 22 stations in six cities.

Broward B-cycle manager Jeff Torkelson says, “B-cycle has been successful. It hasn’t seen the trips as a Miami or New York City has, but those markets have unique situations where they have transportation and parking issues. There’s a different kind of demand in Broward and the density is much different.”

Metrobus, Metrorail, Palm Tran and Broward County Transit all have programs to accommodate bikers, such as racks on buses or storage areas inside train cars. Tri-Rail not only has a bicycle locker program, but it is also revamping some of its coaches to accommodate cyclists.

“More people are biking to public transit and we are trying to facilitate them by making room for bicycles on our train,” says Tri-Rail board member Andrew Frey. “Now people can take their bikes and keep them safe while they are riding the train.”

Torkelson, however, foresees a few obstacles for bikers who also use the train. He mentions that one big issue is that there is not a great way to get into town from Tri-Rail.

He admits that planning departments in the different cities are definitely working hard with the counties to make them more bike-friendly. ?