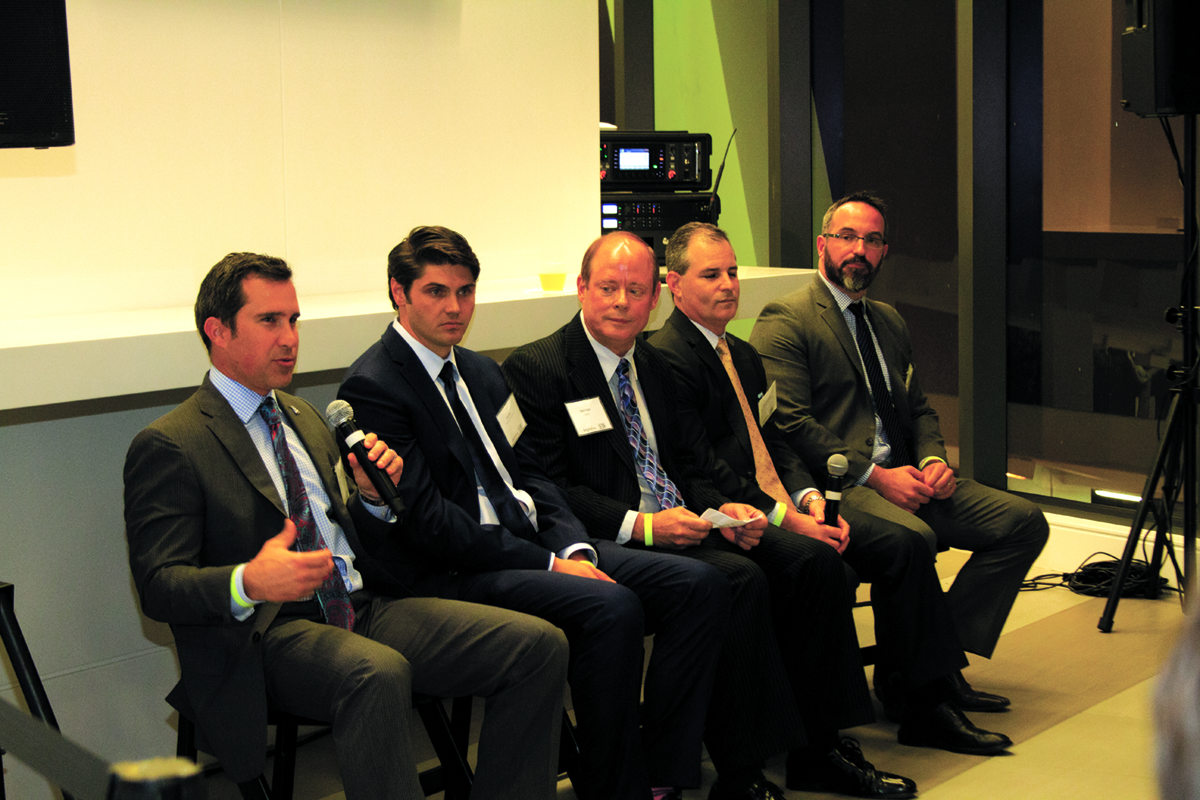 In November, SFBW invited four financial experts to discuss the economy at the Brightline’s Fort Lauderdale station. There was plenty of advice about focusing on the longer-term view rather than knee-jerking to the latest volatility in the stock market. Emerging markets are one area where panelists see opportunity for long-term investors who can stomach the short-term risk.

Editor Kevin Gale led the conversation, which concluded with a mixer where industry professionals mingled.

What’s the general outlook for investors amid rising interest rates, Democratic control of the House of Representatives, and trade disputes?

Cook: We got to be in the late stage of the recovery of where we are, but I think a lot of people take that and wonder: When is the next recession? Is it right around the corner? That’s not what is being exhibited in the economy. It’s extremely strong right now.

And pretty much most every business owner that we’ve talked to says the environment is about as good as it’s ever been. So, the thing that I would like to frame out, first and foremost, is there’s a difference between the economy and the market. They don’t run in tandem.

We look ahead at the market, usually 18 months or so, and say, What’s going to happen in the economy? So, that’s why, when you hear all the noise, the market goes up and down in the short run. Do we think we’re running where things are going to slow down? Do we believe that earnings are going to keep being as strong as they are? That’s really what goes on in the short run, but, over the long term, we try to be fundamental from an investment standpoint. Let’s put the noise aside for a second and not look at the headlines of today. Let’s look at what companies are doing over the long term. As the recovery continues to unfold, I think, we have a while before we have a real issue in front of us.

Dernis: We’ve seen wages rise a little bit in the last year. There’s been an uptick of 2.9 percent year-over-year so that also sets the stage for people to be able to save more. My only caveat, I would throw in there, is the increase in interest rates. That can affect currency, that can affect the coverage of debt, and those are things could peak prices. We could see that late-stage cycle play out where we’ve seen in the past where it takes us into a contraction in our economy. That would be my concern.

Sorel: What we’ve had in the past year, rates have increased, and the economy has done great. The tax plan has come in, and things have looked very good, and we’ve been able to grow. What you will see though in 2019, I believe the Federal Reserve is thinking of raising rates three more times. The question is: As they continue to raise rates, is the growth going to be strong enough?

It’s expected we will see 7- to 8-percent growth of earnings [in 2019]. That’s still growth. But if interest rates continue to rise, we will start getting a little more concerned. Again, we look at 18 months in the future at the stock market. Is there going to be some volatility there? Yes. I think that’s the question that makes things perhaps a little more concerning, even though right now, fundamentally, things look very strong.

Heller: I want to talk about volatility. In 2017, we didn’t see any negative volatility, and that’s an anomaly. I think, moving forward, it will look a lot more like what we saw in October and even what we saw in February and in March. You’ll see steep declines that will be accelerated through some of these computer trading programs and algorithms. But for investors, especially retirement investors, you shouldn’t be concerned about the day-to-day movement. Instead, you should be concerned about where your portfolio is going to be 10 to 20 years down the road.

President Trump said the market might crash if he is impeached. What do you think?

Heller: I’m a big believer—and I said this during the Bush years and the Obama years—that the one person in charge of the White House doesn’t necessarily control how the economy works. I think the government works with the economy similar to how bowling alleys are with children. They pop the bumpers up. If Trump gets impeached by the House, I think you would see short-term volatility, but I don’t think it would hold. The government doesn’t dictate the economy. It’s the consumers that do.

Dernis: I was looking at a statistic the other day. The past 56 years, if you look at S&P 500 returns when you have a divided government with Republicans in one house and Democrats in another, the average return of the S&P 500 is half of what it would be, compared with if one party was in power. You have to look at the dynamics that we are in now, but I think, over time, depending how the government is run and how policies are determined, when you look at those numbers, it’s hard to argue that it’s not going to have some impact on our economic growth.

Sorel: One thing I would add is that back in the 1990s, when Bill Clinton was in the process of being impeached, the market actually increased. So, when the economy is doing well, when companies are earning money, that really is the main driving force. Obviously, volatility will happen in the short term because the market hates uncertainty. But, in the end, as long as the economy is strong, that happens. When Nixon was in office and Watergate happened, the economy was not doing that well and the market tanked. So, I think the economy is the most important aspect, and how companies are doing.

Cook: If Trump gets impeached, what really changes? The midterm election happened, and the House went to the Democrats. The market is saying nothing.

What are some of the best investment opportunities at this point, and what gives you caution?

Cook: I would say emerging markets, specifically. If you are able to have a longer time horizon, if you could give me an asset that was discounted 50 percent in another asset class that has higher growth, that’s a better investment. However, there’s a reason why it’s discounted: Because, in the short run, the dollar is stronger. So, what’s going to happen over the next year or so is hard to predict. I know a lot of people can’t stomach the volatility that comes with investing in emerging markets, but, if you can, you should have a representation to emerging markets now. Industrials might be a really good place to be. Another area we think, which has lagged quite a bit and should do pretty well, is financials.

Sorel: As far as emerging market goes, I feel the same way. If you look at growth in these emerging market companies, their valuations are extremely attractive. They’re earning money. The issue is the dollar is continuing to rise and there’s a lot of negative sentiment out there with the trade conflicts that are going on. What it’s doing is, it’s causing a big hit to emerging markets, but if you you’re looking from a fundamental standpoint, and the fact that it’s gotten beaten up, and looking at everything else out there the valuations are definitely attractive. It’s probably the most volatile asset class that you’re going to find. It’s something you should dip into, but make sure that the percentage of it isn’t too high in your portfolio because emerging markets are a buckle-your-seatbelt kind of ride.

One thing that I’ll add, we look into more private opportunities of income producing real estate. We think that the risk-to-reward for stable cash flow with real assets is something that is important, from a triple-net lease to industrial low-rise office space, multifamily and very big apartments. Affordable housing is a big thing and that’s getting a little expensive right now, but there’s still some opportunity.

Dernis: In the real estate sector, I think short-term leased assets are an interesting place, as interest rates rise, to give you some hedge to rising rates. On the emerging market side, if you have the risk appetite, look at Europe. Think about the countries that have gone through recessions, trying to get their foothold with their economy, such as Greece and Eastern Europe.

Heller: To add a couple things, the issue with China is linked with the trade tariffs. It’s like a falling knife. It’s an attractive place, but in the short term, you will see pain. On the financial side, I think with the Democrats taking over the House, we will have an increase of regulations on banks.♦