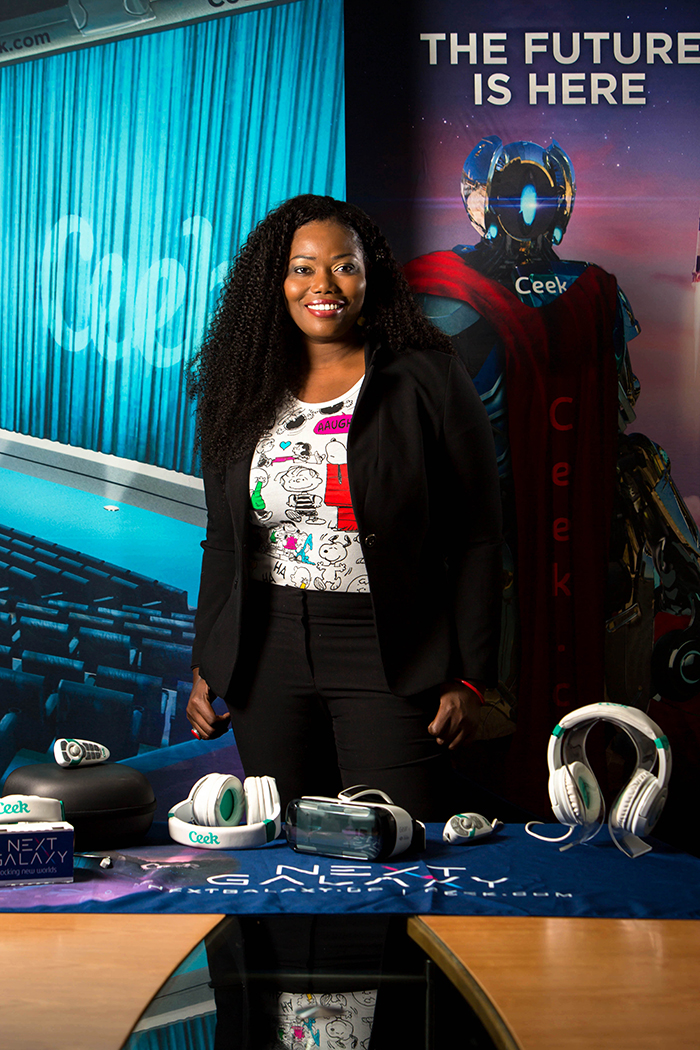 Born in Syracuse, New York, and raised in Ghana, West Africa, Mary Spio didn’t see a computer or a color television until she was 17. Still, she always had a fascination with technology and, despite her humble beginnings, that deep-seated interest led her to not only become an engineer, but a true rocket scientist.

Today, Spio is the owner of her own technology company, Miami Beach-based Next Galaxy, which develops innovative content and tools for virtual reality. The technology built is around Ceek – a VR content hub – and Ceekars, which are being billed as the first smart VR audio headsets.

She also is the author of the book “It’s Not Rocket Science: 7 Game-Changing Traits for Achieving Uncommon Success,” in which she offers no-nonsense advice and insight along with stories designed to empower and inspire.

We caught up with Spio to discuss her triumphs and her tribulations.

When did you come to the U.S.?

I returned when I was 16. I lived for one year with friends of the family. I went into the Air Force at 17; I was in it for five years. When I got out in 1995, I went to Syracuse University for my undergraduate degree in electrical engineering. I graduated No. 1 in my class and from there, I got a full scholarship to Georgia Tech where I studied engineering.

After a couple of jobs, you went to work for Boeing. What did you do there?

I helped them come up with technology for distributing movies via satellite. I have a few patents in the area of digital cinema.

A lot of companies were moving to digital and began contacting me as a consultant, so I started my own company. This way, I could work with more than one company at a time. We became a full-service enterprise offering content creation, content distribution and marketing.

How difficult is it for entrepreneurs to get funding and what has been your secret?

It’s very difficult. It’s changing, but it needs to change faster. The last company I owned (Gen2Media), the investor who came in said it would be easier to get funding with a young white male at the helm.

How have you been able to mitigate racism and how can others do the same?

Racism stems from overcompensation for inadequacies – the fear that someone is going to take something you have, or something you don’t have but want. It’s ignorance-based and you can’t eradicate ignorance by marching only. I believe the biggest civil rights movement of our generation is technology entrepreneurship; it has the potential to level the playing field.

When people are in positions of influence or are successful in their industry, it automatically opens the aperture for others to see greater possibility for people like them.

Tell me about Next Galaxy’s relationship with Miami’s Nicklaus Children’s Hospital.

We are creating life-saving (virtual reality) models for learning how to administer CPR. It’s for the general population, but it’s also for medical professionals. We are creating a scenario for people to practice. There are so many incidents that turn tragic because people don’t know how to perform CPR. We also have plans to work on virtual reality for diagnostics and teaching people how to diagnose different diseases. They also want to enhance their telemedicine capabilities.

What one thing might people learn about you that would surprise them?

People are always shocked to learn that I’m a trained matchmaker – I trained under a Jewish matchmaker. I put myself through school working as a rocket scientist by day and a matchmaker at night. I’ve set up thousands of people and many are still together, some even with children. I was either going to be a relationship counselor or an engineer – I find ways to combine both.

We are hiring, so for any game developers, programmers or people with interest in VR tech, please contact us by going to nextgalaxy.co. ?

Background: An existing company registered in Nevada became Next Galaxy Corp. in 2012.

Next Galaxy’s Ceek simulates the communal experience of attending live events. A preview version of the software is available at ceek.com.

How it works: Users put on virtual reality (VR) headsets, which are made by several manufacturers, and a pair of Ceekars 4-D headphones with 360-degree sound and tactile feedback. A Ceekars VR controller is used for navigation. Programming is selected from the Ceek Social VR Content Hub.

Perspective: The viewer’s perspective could be from a front-row seat, an owner’s box, a race car driver’s seat or the viewpoint of a lead singer.

Methodology for display/distribution of multiple content versions based on demographics