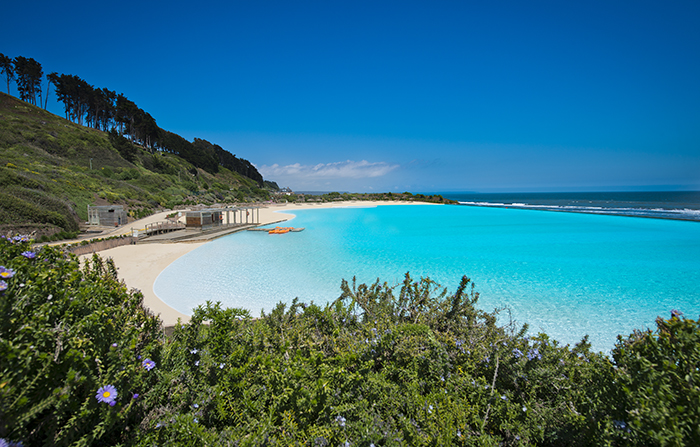 Two years ago, Greg Singleton, president of Metro Development Group, a major Florida residential developer, heard about Crystal Lagoons and was intrigued. Then, he saw photos of the massive, man-made turquoise lagoons at resorts and developments around the world – and people enjoying all kinds of watersports and activities in them – and was even more fascinated. But it wasn’t until he saw existing lagoons in Mexico and Chile in person that Singleton was sold.

“They showed us pictures, but you always wonder if the pictures will do justice to what you see,” he says. “You can touch up pictures and make them look nicer. I took pictures with my iPhone. The lagoons were visually stunning.”

Singleton contracted with Crystal Lagoons to help build lagoons at four upscale housing communities he is currently developing in Central Florida: one in northern Fort Myers, one in Hillsborough County and two in Pasco County.

The developments will be the first to feature the lagoons in the United States, although there are currently 200 projects in 50 countries worldwide, including UAE, Uruguay, Egypt, Peru, India, Panama, Brazil, Colombia and Argentina.

Also coming soon: Crystal Lagoons in Orlando, at the $4 billion SoL? Miami in North Miami and the Hard Rock in Riviera Maya. The company is in negotiations for 35 more, including those in Hawaii, Arizona, Texas and Nevada.

The idea behind Crystal Lagoons came in 1997 from a Chilean biochemist turned developer, Fernando Fischmann, who was planning a development in Algarrobo, a small town on Chile’s central coast.

While the site featured breathtaking views of the ocean, the local shoreline was inhospitable due to its frigid waters and dangerous conditions. In fact, swimming was prohibited in the area.

Determined to offer homebuyers a way to enjoy swimming and watersports – and boost sales “Fischmann came up with the idea of building a large-scale lagoon filled with crystalline, warm water. He traveled the world in search of the technology to turn his dream into a reality. However, he soon learned that the technology simply did not exist.

Fischmann spent years researching until he came up with a way to build such lagoons at reasonable costs. The secret formula – which is patented worldwide in 160 countries – uses a small amount of special chemicals that form a thin film on the top of the water, which prevents evaporation. It also keeps the water clean but without the massive amounts of chlorine that would be necessary for a swimming pool.

San Alfonso del Mar was the first project globally that included this innovative technology, and it was a hit; the area quickly became the most successful second-home resort in the Southern Hemisphere, with units sold at unprecedented rates much higher than nearby competitors.

In 2007, Fischmann received the Guinness World Record for creating the world’s largest swimming pool. That same year, he founded Crystal Lagoons Corporation to market his innovation for use in various real estate developments and industrial applications worldwide. Since then, the privately held company, now based in Amsterdam, has exploded in popularity.

The lagoons can be customized for different developers, featuring deeper sections for watersports, shallower areas for children and even swim-up bars.

U.S. CEO based in Miami

Uri Man is CEO of the Crystal Lagoon’s U.S. operations. Based in Miami, the longtime South Floridian has a background in real estate development and has worked for Miami mega-developer Jorge Pérez’s Related Group as well as Gables Residential.

Man is busy these days in negotiations with 35 different U.S. developers. Not only is he working with homebuilders, but he is creating partnerships with cities, counties and state parks that might want to add lagoons.

“We have an explosion in demand right now,” says Man, who was born in Israel. “This is revolutionizing real estate development because now a developer can buy a piece of property and create this revolutionary lifestyle for its residents anywhere in the world. We’ve allowed developers to create this idyllic beach life anywhere.”

Man explains to potential clients that they can use almost any type of water to fill the lagoons – saltwater, freshwater, even brackish water. The lagoons can even be built in the desert (indeed, some have been built in the Middle East).

“They are environmentally sustainable amenities,” says Man. “They use 30 times less water than an 18-hole golf course uses for irrigation. If you compare a lagoon to a 10-acre park, the lagoon will use less water than grass does.”

And for those wondering why Florida developers located near a beach would be interested in a lagoon, Man has an answer: Many of us can’t afford to live directly on the beach, and besides, the lagoons are free from sharks, flesh-eating bacteria and jellyfish.

By the same token, Man also explains to developers in northern climates that the lagoons can be transformed into winter wonderlands, freezing over to become massive ice-skating rinks.

The company encourages developers to visit the lagoons in person, as Singleton did. Crystal Lagoons does not fly developers to South America or Mexico to view the projects, but will provide tours.

Pérez recently flew to Chile to tour a lagoon and then made a presentation to his key executives. So far, he has not contracted with the company for a lagoon at any of his many projects under development in South Florida.

Singleton and his team made multiple trips to see lagoons in Mexico and Chile before signing on. He is convinced the lagoons will boost sales at his developments in the competitive Florida real estate market. His projects will feature multiple beaches geared to different generations, with deeper areas for paddleboarders and kayakers, a conversational “shelf” for adults to sit and have a cold drink while chatting and a tidal pool and a foot-deep spot for children.

Singleton declined to say how much the lagoons cost, except to say they are “multimillion-dollar projects.” While Crystal Lagoons provides the technology and designs, the developer does the actual building of the lagoons.

“We at Metro have to differentiate ourselves,” Singleton says. “No one has a lagoon but us yet. In a competitive world, everything being equal, we believe buyers will choose the project with a Crystal Lagoon. When you see it, as I have, it’s so visually stunning, that if you’re a homebuyer, you can’t help but see the value in it. You say, “If my home is priced the same as the one down the street, and they don’t have a lagoon, mine will obviously sell faster.”” ?