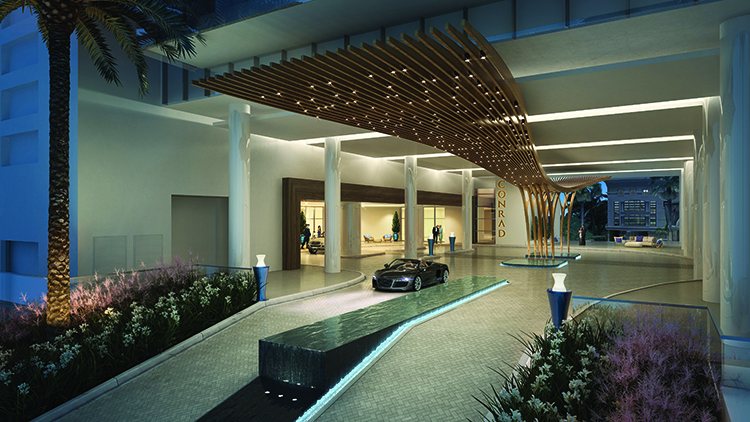 What would a South Florida real estate recovery be without the return of the condo hotel? We might never know, because they’re back in spectacular style – with The Conrad Fort Lauderdale Beach Residences leading the pack in Broward County.

The ocean front property, which is the former Trump International Hotel & Tower, is in the process of a $34 million redesign by developers Orchestra Hotels + Resorts, who purchased it last December. The project stalled during the recession, and Donald Trump withdrew his name from it in 2009. Originally designed by world-renowned architect Michael Graves, the property now is being rebranded as Conrad’s first beach resort in the United States, says Orchestra CEO Andreas Ioannou, and will open in summer 2015.

“What we are offering in Fort Lauderdale Beach is a spectacular value, as the Miami market is becoming almost cost prohibitive. Miami Beach is twice as expensive as we are for comparable units at $2,000 per square foot,” Ioannou says. “We will have world class residences and amenities in an unparalleled beach location.”

�With all the condo hotel projects we have underway now in South Florida, we have to wonder whether enough buyers will show up,” says Jack McCabe of real estate analysis firm McCabe Research & Consulting, who famously first called the last local real estate bubble. “Developers always say sales are strong, but there is really no way to quantify it until these buildings are finished. About two to three months after they receive their certificates of occupancy, we will be able to see how successful they really are.”

McCabe notes that the history of condo hotels here is questionable.

“Nearly every one has been a failure,” he says. “They don’t seem to get the rental rates of hotels and the revenue generated via rentals is a fraction of the units” costs for maintenance, insurance and taxes.”

“Whether a condo hotel is successful depends on the company behind it,” he says. “Hotels are doing exceptionally well and we see the condo hotel as being the best model to leverage that.”

The Conrad Fort Lauderdale Beach Residences has stunning new design features by architectural firm Garcia Stromberg in collaboration with interior design firm Edge of Architecture. Upgrades include a porte-cochere entrance with 24-hour valet service, a striking new lobby and a dramatic glass-encased area “Jewel Box,” which will be available for events and connect the property’s East and West towers, two stories above ground level.

It will offer 290-condominium hotel residences that owners have the option of renting out as hotel rooms via Conrad for as much as four months of the year. Studios, one-, two-, three-, bedroom units and penthouses are available with a starting price of $500,000. All are fully furnished and appointed with spacious private balconies, private owner’s storage closets and marble entry foyers, as well as exquisitely finished kitchens with top-of-the line appliances including Sub Zero refrigerators and Wolfe cooktops. Spa-like bathrooms will boast marble vanity tops, separate shower and baths.

Certainly, Orchestra appears well prepared to take on the challenge of launching the property. The company successfully developed the Hilton Fort Lauderdale Beach Resort. Founded in 2013, the company’s strategy is to acquire properties in strategic locations that will complement its portfolio. Its market is sophisticated global travelers.

For the Conrad, Ioannou expects to attract those from the Northeast corridor and the Midwest in the U.S., along with Europeans and South Americans.

“It will be difficult to lure Latin Americans away from Miami; they see it as being their New York,” McCabe says.

He also questions whether Conrad unit owners will be able to realize value if they are only able to rent out their units four months of the year.

“Usually condo hotels allow rental of units between nine and 10 months of the year,” he says. “�This would only allow half that amount.”

Ioannou says the four-month rental period is based on research Orchestra has done and its experience with the Hilton Fort Lauderdale Beach Resort.

“Those who buy have to really enjoy the lifestyle of living with hotel amenities,” he adds. “If it works as a second home and appreciates in value, that’s great.” ?