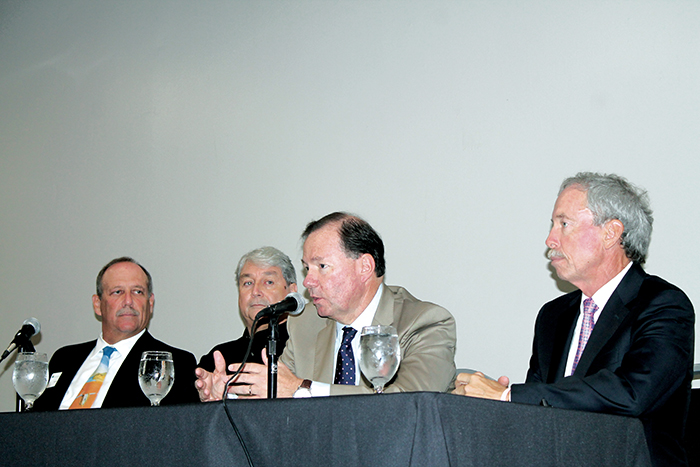 If you think innovation isn’t an ongoing process that requires steady commitment, consider Whole Foods Market. Even now, with more than 420 stores, Whole Foods has an expectation of innovation at each new location.

For every new location, team members try to identify key cultural and neighborhood characteristics that can be reflected in the store, says Juan Nunez, Whole Foods” Florida region president.

For example, a Miami store is pioneering churrascaria – meat cooked and served in a Brazilian barbecue style, Nunez says. If it catches on, it could be introduced in other stores, just like the wine bar concept that started in California.

“Innovation has been part of our culture since our first store opened 35 years ago,” says Nunez.

Nunez and the other panelists at South Florida Executive Roundtable’s Innovation event talked extensively about the importance of culture when it comes to innovation, the need for constant incremental improvement and how managers can be proactive to find out what changes are needed.

Panelist Tom Cornish, Florida president of BankUnited, says many companies like to talk about innovation, but lack the commitment. “A lot of companies like the end result of innovation,” he says. “But you don’t get to that without embracing cultural elements.” He likes a multidisciplinary team approach to innovation and says you have to be willing to take some risk and allow mistakes to move quickly with ideas.

Keep the organizational structure flat, he says. “The big joke in a large company is if you ever have a good idea, by the time you get done with the [implementation] process, you will never want to have another good idea.”

Panelist David Appel, South Florida managing partner at accounting firm Cherry Bekaert, says his company endorses a willingness to make mistakes and uses pilot programs to test ideas. Rather than senior managers picking a new computer system, the accounting firm assembled a team to try different systems. “They will know what is more effective for them and what clients need,” he says. “We can help deliver things to our clients in advance of their deadlines. If they can file their SEC reports faster, we win and they win.”

About eight years ago, panelist Keith Koenig, president of City Furniture, adopted the Lean Management System, which emphasizes continuous improvement. “A lot of times we think of innovation as home runs. Lean thinks of it as base hits,” he says. Lean Management was derived from Toyota’s production system, which emphasized incremental changes to improve efficiency and quality. It can work with any business.

Cornish says it’s important to gather competitive intelligence about industry innovations. The highly regulated field of banking has seen competition arise from unregulated competitors, such as Blackstone, the Carlyle Group and KKR in private equity and Lending Tree and Lending Club for funding.

“It’s not one monolithic competitor,” he says. “Every business you are in has different competitors that are chasing niche strategies. If you don’t have a group in your company that forward-thinks about these things, by the time it becomes a problem, it’s really a problem.”

One innovation issue for bricks-and-mortar retailers is the same-day delivery service being developed by
Amazon.com.

Appel says innovation in his firm means digging deeper when clients ask a question such as, “I want to sell my business, what’s it worth?” Appel would want to know what figure the seller wants and how the accounting firm can help the seller get there if the current valuation doesn’t reach that number. Cherry Baekert’s approach may involve evaluating key personnel and whether they should be replaced to better position the business for sale. “We sometimes have to give them the tough answer to get there,” he says.

Cherry Bekaert also has become active with the National Center for the Middle Market at Ohio State University, Appel says. That helps the firm benchmark clients to their competitors” metrics.

Cornish says it’s important to not just look at your own industry, but others as well to find good practices. “I make calls every day,” he says. “I try to see a client company every single day. It’s a client relationship opportunity, but it’s also a great way to learn.”

Cornish also says he also walks the campus at BankUnited every day, asking people what they think, how everything is going and what the bank could do better. “If you are not doing it all the time, you never get the truth and you are not getting everybody’s ideas. It’s too formal,” he says. “I read in a book that said the best leaders have to be curious” If you are not, you are roadkill.”

Whole Foods believes in innovation by observation, whether it’s enlisting a champion pizza maker in Italy or partnering with Zak the Baker in Miami’s Wynwood district, whose products are now in some Whole Foods locations, Nunez says. “Since we couldn’t do as well as him, he’s doing it for us.” ?

South Florida Executive Roundtable had four panelists as part of its Innovation event at Barry University, which was sponsored by SFBW: