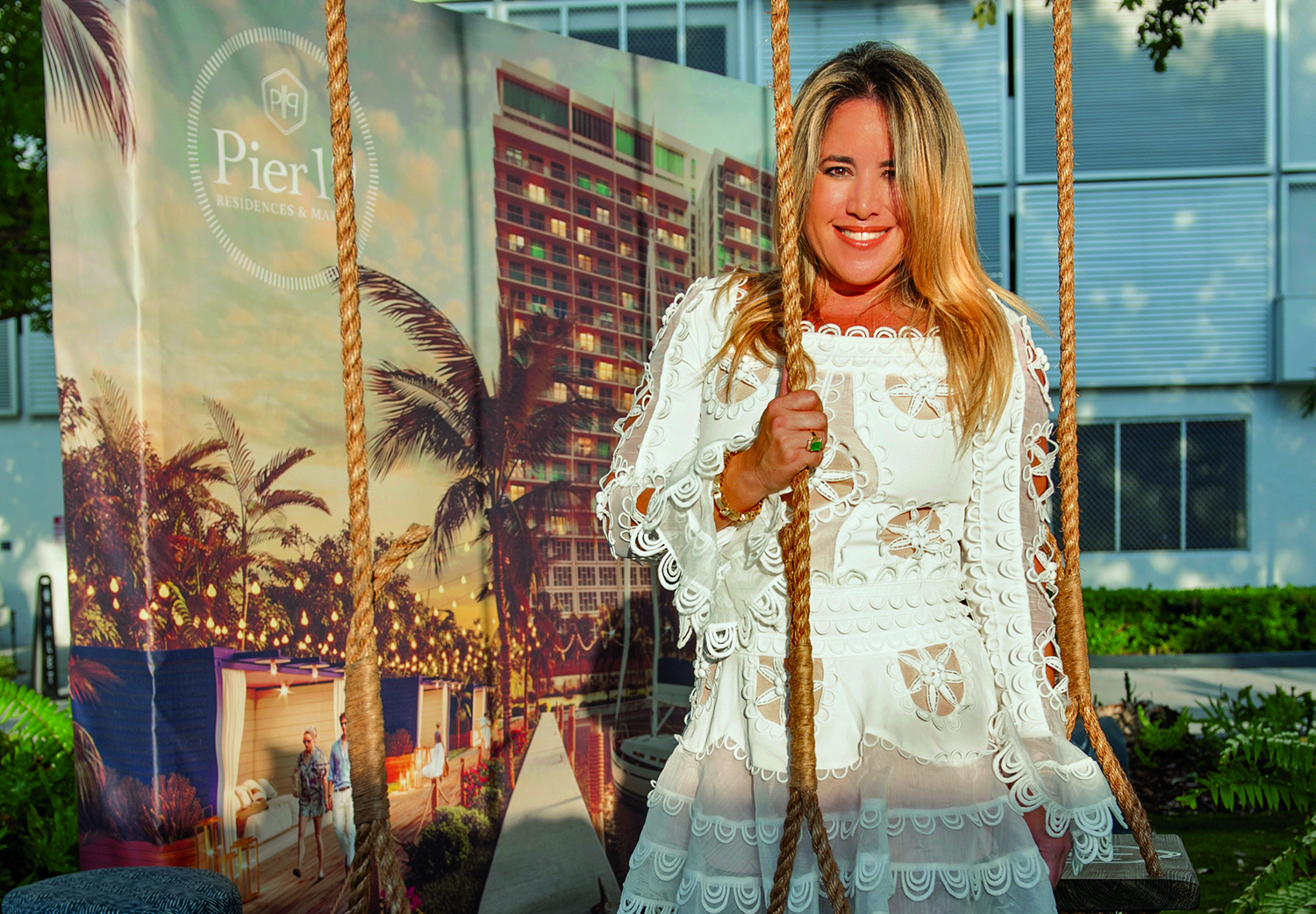 You might say Lissette Calderon was born to be a developer along the Miami River.

When her parents brought her home from the hospital, they lived in an apartment building on the mouth of the river. The building is now long gone to unveil the underlying Miami Circle, home to the indigenous Floridians who first appreciated living on the river.

As a child, Calderon says she loved reading about the Tigris and Euphrates rivers, which flowed into the Persian Gulf and created a cradle for civilization in ancient Mesopotamia.

When traveling, she would marvel at the rivers flowing through Chicago, London and Paris. “You realize all great cities and major cities have a river running at the heart of it.”

Then, there was the Miami River of her youth—a sketchy, polluted waterway that made headlines for drug busts. The city turned its back on the river, even though Julia Tuttle and Mary Brickell founded Miami on its shores.

“I couldn’t understand why the Miami River was neglected waterfront. Everyone thought of waterfront as the bay and the ocean,” Calderon says.

These days, you could argue that Calderon is the modern-day queen of the river, following in the footsteps of Tuttle and Brickell.

Calderon’s Neo Group pioneered modern multifamily development along the river with Neo Lofts in 2002, bringing the type of vibe she previously found living in New York City and Philadelphia.

“The 199 first homeowners were true pioneers and visionaries talking about what the Miami River could and should become,” she says.

Calderon says she worked closely with then-Miami Mayor Manny Diaz, who she credits with being a visionary about the city’s future. The groundbreaking for Neo Lofts was held at Jose Marti Park, about a block south of its construction site. The park had been closed for 10 years and the groundbreaking gave the city a reason to reopen and re-energize the park, Calderon says. Diaz also agreed that the first phase of Riverwalk should be by the project.

Calderon followed up with two projects near Miami Avenue—Neo Vertika, with 36 floors and 443 lofts, and Wind by Neo, 41 stories and 481 lofts. A project next to Wind, called Cima, started early sales, but the site was sold for about $28 million to KAR Properties as the Great Recession wreaked havoc. (KAR is now in advance sales for the project, One River Point.)

After earlier breaking away from Related Group to launch Neo Group, Calderon rejoined Related Group to lead its international and strategic projects division. Now, she’s back in the development game with Neology Life after buying River Oaks Tower & Marina for $56 million.

River Oaks, on the south shore between 17th and 22nd avenues, had become populated with Airbnb rentals.

Charles Foschini, senior managing director of Berkadia, said the purchase price wasn’t supported by the existing income stream, but Calderon found a foreign backer who supported the acquisition and additional investment to transform the property.

With Pier 19, Calderon is at nearly 1,500 units for her projects, but a lot more is coming.

The Real Deal reported that Calderon plans a 13-story, 192-unit apartment building in the emerging Allapattah neighborhood at 1569-1652 NW 17th Ave., which is about four blocks north of the river.

Calderon didn’t want to comment on specifics of upcoming projects, but said there are plans for another 325-unit project. Her team was negotiating for three other sites, and there’s also another turnaround project like Pier 19 under talks.

“We have gotten to the point where, as a team, we feel it’s prudent for us to explore other urban cores kind of in Miami-Dade County and South Florida in general,” she says.

Pier 19 also offers the possibility to build another tower above the garage, she says.

Calderon has paid plenty of attention to the renovation of Pier 19—even details such as having the same type of bulbs in each of the hallway lights.

She is creating a sense of community from the dog park near the entrance to sunset gardens and a palm court facing the river. She likes activities, such as “Yappie Hour” (dogs are welcome), Zumba sessions, kickboxing, yoga and full-moon taco night. She shows how walls will be moved to create a larger, more-cutting edge work out center.

“We like to say we don’t create buildings, we create lifestyles,” she says.

Walking out of the Pier 19 lobby with its nautical-themed ropes, hanging chairs and lights, she points to a waist-high wall that obscures part of the river view. That will have to go, in favor of glass, she says.

“To me it’s one of the most interesting and authentic views you can have in any one of these buildings to see these gigantic cargo ships with tugboats. The next one is a yacht. Then the crazy paddleboarder and then the manatee swimming behind it,” she says.

Other developers are buying in to Calderon’s long-standing vision.

Just down the river from Pier 19, the eight-acre River Landing Shops and Residences is under construction on the north shore. It will include 528 apartments, 150,000 square feet of office space, 28,000 square feet of riverfront dining, a Publix supermarket, and stores for T.J. Maxx, Ross, Hobby Lobby, Burlington and West Marine.

Further down the river’s south shore, at 1001 NW Seventh St., Mast Capital is planning Miami River Walk, which would have about 700 apartments built in two phases.

There are good economics behind the projects: They are a short commute to downtown, but the rental prices are more affordable than Brickell. There is also a huge employment base in the government and health care district along the river’s north shore.

Growing Up in a
Real Estate Family

Calderon says she grew up playing in construction sites since her father developed some townhomes. Her mother is a licensed real estate broker and now leases Neology Life’s projects.

Her father died when Calderon was 17. “My dream would have been to do something with him,” she says.

Calderon graduated from Coral Gables High School. She recounts how 150 students started the international baccalaureate program, but she was one of only 14 who ended up graduating with an IB diploma. “I think I had a B once and I cried,” she says.

When asked what traits make her successful, Calderon says, “Probably, if I had to say one word, it’s ‘discipline.’ Because I always tell everyone strategy without execution is useless.”

The corollary is to have a passion about what you do day in or day out.

“If you try to follow the money, never are you going to be happy or great,” she says.

She realized that early on. After she obtained a bachelor’s degree in economics from the Wharton School of Business at the University of Pennsylvania, Calderon became an investment banker with Donaldson, Lufkin & Jenrette in New York. “I never knew I would be great for, the simple fact is, I didn’t love it,” she says.

After a year, she came back to Miami and her career eventually flourished with connections to a trio of top business leaders in Miami: banker Adolfo Henriques, developer Manny Medina and condominiums giant Jorge Perez. She worked with Medina initially, but then he changed his focus to technology and Henriques told her if she wouldn’t work in banking with him that she should meet with Perez.

Calderon recalls being a 22-year-old nobody at Related and sitting in the cubicles between Perez and an executive vice president. After six months, Calderon’s boss left and Perez asked if she wanted to be put under another VP or do the job herself. (You can guess the answer.)

Perez would walk out of his office at 7 p.m. and many nights Calderon says she would be one of the few department heads still at work. She and Perez would chat. Calderon’s then-boyfriend, and now-husband, thought she was the coolest person in the world when Perez gave her courtside tickets to a Miami Heat game. Perez asked her to even help out at his home, which resulted in a scolding from his wife, Darlene. Calderon recalls: “I would say, ‘No, no, no. This is great. This is amazing.”

Calderon moved up the ranks at Related, but was ready to strike out on her own.

Perez told her he would have stopped her from going to a competitor, but wouldn’t stop her from going her own way. She remembers him saying, “When I look at you, I see myself at 25 years old.” She adds, “That was one of the best professional compliments anyone could pay me.”

Calderon started with a townhouse project to show she could do a project on her own and then moved on to building the 21-story Neo Lofts at 28.

She chose the Neo name because it meant new. She did informal market research by asking people at The Globe Café in Coral Gables where they wanted to live. She found out many people were frustrated by restrictions on pets.

Calderon says she is obsessed with her chocolate Labrador, Java, and she still talks wistfully about Zeus, her late rescue dog, who helped inspire the dog park at Neo Lofts.

While Calderon works at home late at night, Java and her daughter’s mini Australian shepherd sit at her feet. “When they see that computer shut off, they run up the stairs into my master bedroom and jump on the bed,” Calderon says.

Calderon stays close to her daughters, 12, 13 and 14, by taking them to school in the morning.

When asked if succeeding in the male-dominated world as a woman is challenging, Calderon has a pointed answer that drops any qualifiers: “I am a developer, period.” For every biased person she’s encountered, Calderon says there are “50 wonderful people who have the different perspective I bring.”

There are still times when she is the only woman at the table, but she often wins people over with her work ethic. She typically works over 100 hours a week. “As I tell people, if you love what you do, it’s not work. I get to play with Legos all day long.” ♦