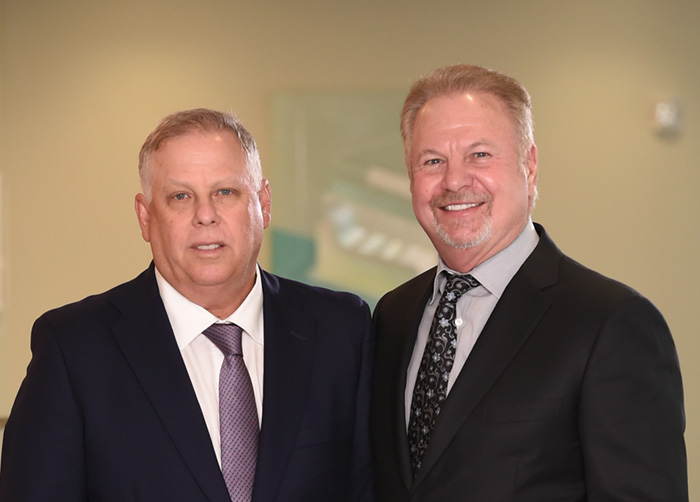 The names of the top law firms in South Florida typically come from long-since-departed founding partners. However, that’s not the case at Greenspoon Marder.

Gerald Greenspoon and Michael Marder started their firm in 1981 and are still running it as co-managing directors 35 years later.

That’s probably an understatement. Greenspoon Marder has been a juggernaut during the last two years, with offices opening from Miami, Miami Beach and Tallahassee to Las Vegas, San Diego and New York City. It has vaulted up the ranks of national firms and is now the sixth-largest law firm in South Florida, on track to employ 200 attorneys by the end of the year. And it recently made headlines by becoming one of the nation’s first major firms to open a cannabis law practice.

SFBW caught up with the duo at their new office on the 36th floor of Miami’s 600 Brickell. While they aren’t together on a daily basis – Marder is based in Orlando and Greenspoon is based in Fort Lauderdale – they talk constantly.

“Even as ideas are coming to me or I’m thinking about something, it’s never in a vacuum; it’s never alone. It’s done with a discussion with my best friend,” Greenspoon says.

Marder says they first met 38 years ago, while working for a seven-member law firm a few blocks from the new Miami office. “We became instant friends, like brothers,” he recalls. I would say our bond has grown through the years. It was always strong, an unbelievably synergistic thing.”

They worked together there for three years, gaining experience in real estate, business and commercial litigation law, but they became unhappy and wanted some changes. The request was rejected, so they left.

Their backgrounds may help explain their perspectives as leaders and willingness to take risks.

Greenspoon, who left Montreal amid the Quebec separatist movement in the 1970s, is the son of Holocaust survivors. “My dad survived various camps and my mother survived with her dad by hiding in the woods of various secret areas,” he says. “They both witnessed atrocities and experiences that we can’t even describe.” He says their experiences cause him to become upset by any form of discrimination.

Marder was born in Philadelphia but grew up in North Miami Beach. He lost both his parents to illness as a teenager.

At different points in the interview, they both said, “We do not have any fear of our ability to do anything.” The foundations to their success include putting clients first, keeping an entrepreneurial mind-set, anticipating growth areas in law, taking calculated risks and creating a low-turnover, career-minded workplace.

During the hiring process, the firm tries to project where someone will be in five, 10 or 15 years. “We want them to be successful and show them the way,” Greenspoon says.

Sometimes there are tough decisions that lead to separations, but Marder uses a football analogy to explain why many associates stay: Someone who can accept being the backup quarterback can bring value as well.

One early example of anticipating growth areas was offering legal services for the timeshare industry when it was in its infancy. “We said this is a really interesting business, and it is going to be big some day,” Marder says, adding that he didn’t dream that the likes of Disney, Universal, Marriott and Hyatt would turn it into a multibillion industry.

While the firm started out in North Miami, the Orlando office was added because the timeshare resort business became strong there. In fact, Marder is general counsel for Westgate Resorts, which was ranked in 2015 by the Orlando Business Journal as the region’s second-largest private company with $841.68 million in sales.

Marder is also on the board of the American Resort Association and played a role in 2010 state legislation that allowed nonjudicial foreclosure on timeshare interests.

In South Florida, Greenspoon Marder has a long relationship with Berkley Group, which is headquartered in Fort Lauderdale. Its website says it has 14 resorts and offers timeshares for sale in 50 resorts.

“We are more than extremely close with the executives, the employees and the strategies of those companies,” Greenspoon says. “As they grew, we grew with them.”

The multidisciplinary nature of the timeshare legal work helped Greenspoon Marder diversify into a full-service firm with 188 lawyers in 60 practice areas. In June, it jumped 35 places to No. 236 on The National Law Journal’s list of largest U.S. law firms.

The partners have a philosophy of trying to make good decisions with all the information available, knowing some decisions won’t turn out perfectly, Marder says. “We don’t beat ourselves up if it doesn’t turn out. There’s no second-guessing. … We know we are going to be right more than we can be wrong.”

Marder says he is good at execution while Greenspoon is a “tremendous visionary.”

“Gerry has an amazing sense of what the next opportunity is. I never know what the day is going to bring and what sort of call I’m going to get from him,” Marder says.

Greenspoon says a key consideration is always how a decision will affect shareholders.

“We want them to benefit as much as possible. That has worked because we basically have no turnover in our shareholders. They are here for life; they love it and they are so happy. It’s not because we tie them here, but because they say this is a great place to be,” Greenspoon says.

The new Miami office includes a café for employees

The firm has had significant talent acquisitions, most notably in 2011 when 50 attorneys from Ruden McClosky came on board. Ruden had 200 lawyers at its peak, but ended up in Chapter 11 bankruptcy after Florida’s real estate market collapsed. Creditors got $5.8 million in cash as part of Greenspoon Marder’s bid to buy what was left of the firm, excluding its Tampa office.

“We were fortunate we didn’t have any layoffs of attorneys during the recession, Marder says.

That wasn’t just by chance, though.

“Many years before, we had made a strategic point to diversify the practices,” Greenspoon says. “At the same time we looked at what will be productive during this time. … We were able to redeploy real estate attorneys into representing banks and institutional lenders in the foreclosure process.”

Greenspoon says the firm watches costs carefully. The goal is to maintain and increase profitability and compensation for shareholders.

Opening a New York office was considered for several years, he says. The firm wanted to be involved in high-level corporate securities, such as large private-equity deals and representing public companies in registrations and filings with the Securities and Exchange Commission.

“We came to the conclusion that needed to be done from New York City,” Greenspoon says.

In April, the firm announced the addition of Jacob, Medinger & Finnegan, a New York litigation boutique. It has experience in complex corporate and commercial matters, product liability defense and mass torts, which have multiple plaintiffs and sometimes more than one defendant.

In June, Greenspoon Marder announced the opening of its cannabis practice and the related addition of lawyers in Las Vegas, Denver and San Diego. The practice will represent investors, private-equity funds, public companies, health care providers, growers, processors and retailers. A news release estimated the size of the legalized marijuana industry at $5.4 billion.

“We have clients who got in this business,” Marder says.

The firm is already in the regulated industries of health care, alcohol, firearms and tobacco.

People ask the partners if they have a personal view amid the cannabis legalization debate. Marder says everyone deserves a lawyer, even if it means taking on an unpopular issue.

“That is what makes the country great,” he says. “It’s our job to do that whether it’s popular or unpopular, even though we might have a personal opinion.” ↵

Greenspoon Marder begins with a handshake between Michael Marder and Gerald Greenspoon.

Greenspoon Marder reaches 52 attorneys as it combines with Abrams Anton, a 12-lawyer firm with offices in Hollywood and Boca Raton.