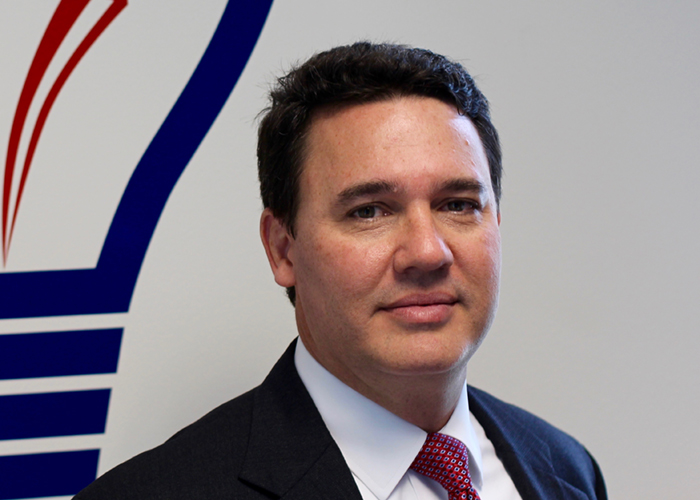 After 4 years, FAU’s Tech Runway has become one of
South Florida’s most fertile cradles of enterprise

Rhys Williams knew what he was getting into when he became the new head of Tech Runway, Florida Atlantic University’s small-business incubator. He’d already served on the FAU Foundation board for six years and started New World Angels—an investor group—right across from Tech Runway in FAU’s research park.

But while he had always been either an entrepreneur or an investor, he’d never considered occupying space between the two, and especially not in an academic environment.

“I had held some meetings in the Tech Runway facility and had judged two of the classes, but sometimes when you see a result, you don’t have an appreciation for everything it takes to get to that point,” he says. “The programmatic strength was much greater than I’d imagined.”

Williams, 52, was recruited to become an FAU associate vice president and managing director of FAU Tech Runway after Kimberly Gramm, its first director, left to head a similar program at Texas Tech University.

Tech Runway, now about 4½ years old, was just gearing up for its fourth launch competition when Williams walked in the door in April.

Companies in its first three classes not only have distinguished themselves with success, they have brought recognition to both Tech Runway and to FAU. Last year, for example, Florida Venture Forum—a statewide trade group for the venture-capital industry and angel community—tapped Tech Runway companies as its No. 1 and 2 startups in the state.

“That’s quite a statement,” Williams says.

Since he came on board in April, Williams has been building on that success. Change, he knows, is integral to that process.

The most obvious changes is the size of Tech Runway’s fourth class. While the first three classes were limited to four companies, the fourth class comprises 12 entrepreneurial enterprises. In Williams’ view, a larger class provides the opportunity for greater “cross-pollination” among the companies.

“Sometimes the point of instruction is not the commonality, it’s the difference,” he says, rattling off the sectors represented in the current class, everything from software and biotech to medical devices and aquaculture.

The quality of Tech Runway’s boot camp, too, is enhanced by having more companies in various stages of their development.

Williams also boosted and broadened Tech Runway’s recruitment, reaching beyond the FAU community and Boca Raton area. “It was the first time we actively recruited companies based on quality. In the past, by its very nature, the program had become very FAU-centric.”

In a first for the program, thee companies chosen for the current class are based in Miami-Dade County.

And at the same time Tech Runway reached beyond its traditional market, Williams also began looking for potential participants closer to home—right on campus. FAU faculty and staff develop invention, hold patents and come up with great ideas, but they’re generally not the ones who build companies around those breakthroughs. Now, three companies in the current class are being developed by faculty and staff members.

Williams sees a virtuous cycle growing out of Tech Runway: Companies graduate, they put down roots in the research park, and they continue to grow their relationships with the program and with subsequent entrepreneurs.

“Companies come to us either as a concept or in their early stages,” he says. “They graduate, they stay here, and maybe two years later, they’re still working with FAU faculty and staff and hiring interns. We maintain a cluster that feeds on itself, and then these companies stay in the region.”

“Entrepreneurs hang out with entrepreneurs,” Williams says with experience. “They’ll refer high-quality businesses to us. Their interns might become the next entrepreneurs. These guys get inspired by what they see.” ↵

Tech Runway selected its first class of entrepreneurs in 2014. Here’s an update on where some of them are today:

BedaBox, which initially developed a dashboard application to help people make purchases with any currency, rebranded its fulfillment division as ShipMonk and launched a proprietary inventory-management software system. ShipMonk now has 30 employees, and in 2017 plans to move to a larger warehouse, open a West Coast fulfillment center and launch its inventory-management software as a standalone product for e-commerce businesses.

Modulux first received patents for a line of commercial-grade “white light” LED products. Since 2016, it developed a series of LED grow lights called MaxGro, designed to optimize the growth, yield and potency of legal cannabis. In 2017, it plans to launch a loaner program with select potential customers in Colorado and Oregon, and is seeking funding to build inventory and launch production of MaxGro products in 2017.

Design Comfort Shoes was rebranded as Ilene Berg, and, in 2016, it received a patent for its sole technology. From its initial six SKUs, the company now is offering 23 SKUs. It has redesigned its website and is exploring pop-up stores to expand its retail footprint. It has been covered by the Wall Street Journal and The Huffington Post.