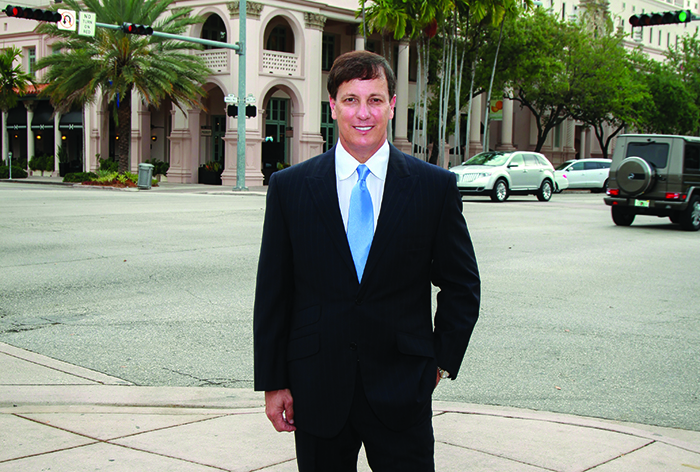 Guru of the Gables

William Kerdyk Jr. talks about a career in real estate, banking and golf

William H. Kerdyk Jr. and his family have gone hand in hand with the growth of Coral Gables.

Kerdyk was born at Doctors Hospital, went to Coral Gables High School and then Florida International University. After graduating with a bachelor’s in real estate, Kerdyk worked for an uncle who had a residential real estate company that began in 1926. Kerdyk bought the company in 1992 when it was a “sleepy” residential firm, he says. The business, which has 45 associates, is now 60 percent commercial real estate, 25 percent residential and 15 percent management.

Kerdyk also has achievements in banking and the golf industry. He is a former chairman of the Junior Orange Bowl Golf Tournament and organizes tournaments globally. He is also a partner in a business that manufactures golf clubs in China.

Through the Junior Orange Bowl, Kerdyk met a couple of Japanese businessmen and worked with them to start the Toyota Junior World Cup golf tournament in the 1990s. Kerdyk says he goes to Japan twice a year. “If you would have told me when I was 10 years old that I would spend a year of my life in Japan, I would have laughed,” he says. Not only is he an avid golfer, his sister, Tracy, was on the LPGA Tour after being NCAA player of the Year in 1988. She’s now a Realtor associate with her brother.

In 2006, Kerdyk founded the Bank of Coral Gables, which raised $20 million in capital. The bank got up to $220 million in assets, but like many banks, it had to shrink to meet regulatory requirements during the recession. “We didn’t have a lot of land loans,” he says. “We didn’t do crazy stuff. What we thought were good people just stopped paying us. It was brutal.” Kerdyk is now on the board of First American Bank, which acquired the Bank of Coral Gables in 2014.

When asked about his views on Coral Gables real estate, Kerdyk says the city has plenty of strength in its commercial market. He also sees retail real estate opportunity on Miracle Mile, which is getting a $20 million makeover. Leasing rates are $35 to $60 a square foot compared with $100 to $150 on Brickell Avenue. “I think you will see leasing prices and sales prices increase,” he says.

Kerdyk points to the wave of new development, too. For example, Paseo de la Riviera is a $172 million project with 224 residential units and 252 hotel rooms on the site of a Holiday Inn on South Dixie Highway near the University of Miami. And developers Armando Codina and Jim Carr are planning a 16-story, 214-unit apartment building at 2020 Salzedo Street, a few blocks north of Coral Way near Le Jeune Road.

The biggest project of all is Mediterranean Village at Ponce Circle, a 1 million-square-foot project with 214 condos, 15 town homes, stores and a luxury hotel. The 218-foot-tall project will be topped by a two-story restaurant.

With offices about a block away, Kerdyk is positioned as one of the dwindling number of real estate brokerages that aren’t part of a national network. Kerdyk says he competes by emphasizing technology and utilizing a growing number of research services. “I think that my positives are that I have a strong name in south Miami-Dade County, and I like the idea of having a strong local firm,” he says. “No matter how many of these larger nationwide companies you get, people still like doing business with brokers they can touch and know.”

Since leaving the Coral Gables city commission in April 2015, Kerdyk has brought more and more younger people into his firm, saying, “I feel these people are hungry, tech-savvy and smart.” ↵