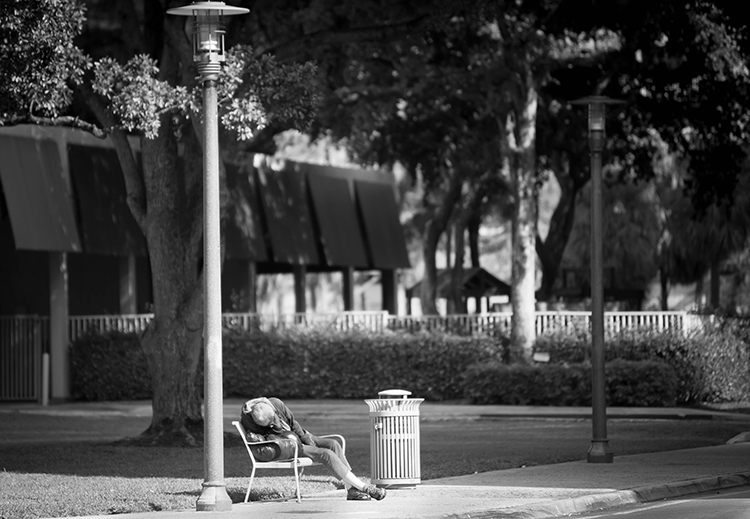 As Fort Lauderdale wages an internationally public war with people feeding the homeless in outdoor locations throughout the city, those who have successfully dealt with similar issues in Miami-Dade and Palm Beach counties weigh in on the problem. While the feeding makes fodder for media feel-good stories and creates some degree of public satisfaction, the act may actually exacerbate the homeless problem overall, they say.

The issue of the homeless and panhandlers has created controversy for decades in South Florida – ranging from a tent that was once used to shelter the homeless in Fort Lauderdale to a camp under Interstate 395 in downtown Miami. Business leaders in the region’s downtown areas, where the problem is often highly visible, have been vocal about the need to deal with the issue.

In December, a judge ordered Fort Lauderdale to temporarily stop enforcing ordinances it passed in October that restrict the outdoor feeding of the homeless to areas where groups have the permission of surrounding property owners. Anyone providing the homeless with food outdoors must also provide portable toilets, according to the ordinances.

The ordinances and ensuing legal fight earned the city the nickname “Fort Haterdale” in some international coverage. The Anonymous Group launched a denial of service attack against the city’s website, which was temporarily shut down as a precaution.

The judge ordered the city to enter into a period of mediation with groups trying to feed the homeless outdoors. This includes Love Thy Neighbor, headed by Arnold Abbott, a 90-year-old World War II veteran who has been feeding homeless people on Fort Lauderdale Beach for years. The city’s attempt to restrict his activity brought the issue to the forefront late last year and caused a storm of negative international publicity for the tourism-sensitive city.

“Saying that our feeding people is unnecessary and causes poor sanitation and other problems is a bunch of baloney. There is a lot of mythology surrounding the homeless and what they need,” says Abbott, who was recently honored in a Washington, D.C. tribute to those who help people living on the street. “All people have a right to freedom on the beach, and we are very careful to clean up (after feedings).”

City of Fort Lauderdale Mayor Jack Seiler did not return calls for comment, but has said that mediation discussions will likely prove positive, and he hopes Abbott will meet the city halfway on the issue.

It’s true that all people have rights to freedom in many public places, but they don’t have the right to prevent others” enjoyment of these areas through their actions, notes Ron Book, a prominent attorney and lobbyist who has headed the Miami-Dade County Homeless Trust for the past 21 years. During his tenure, the number of homeless in the county decreased from 7,000 to 777 currently. The trust, which is funded from the proceeds of the county’s 1 percent food and beverage tax, has about $55 million to work with annually.

“Meaningful solutions for the homeless should not mean compromising everyone’s health, safety and welfare – which is what outdoor feedings do,” he says. “Meals need to be provided indoors, where there are bathrooms, where garbage can be collected, and where services can be provided to help get people off the streets and meet their overall needs.”

Fort Lauderdale officials need to show leadership and secure the help of Broward County government to obtain more comprehensive resources for the city’s homeless to solve the problem on a long-term basis, Book says.

“There’s a lot of emotionalism and temporary satisfaction surrounding the outdoor feeding issue. People think it’s humanitarianism, but it’s just the opposite – it helps perpetuate homelessness, which most people experiencing it really don’t want,” he adds.

It’s important to look at the needs of the whole person, when considering how to help one who is homeless, says Claudia Tuck, director of the Homeless Services Program for Palm Beach County, which addresses the problem on a county-wide – rather than a city-by-city basis. The county, which Tuck says is committed to ending chronic homelessness in its midst within the next few years, recently enlisted the services of international community planning and housing expert Iain De Jong to help it create and implement the right comprehensive, community-based plan.

“Our outreach teams right now are trained to help people who are on the streets relocate to safer places where their needs are met on an overall basis. With that goal, trainers discourage staff from bringing clothes, water and food to people on the street,” she says. “We want to provide the help they need in the way that is most meaningful to them – overall solutions.” ?