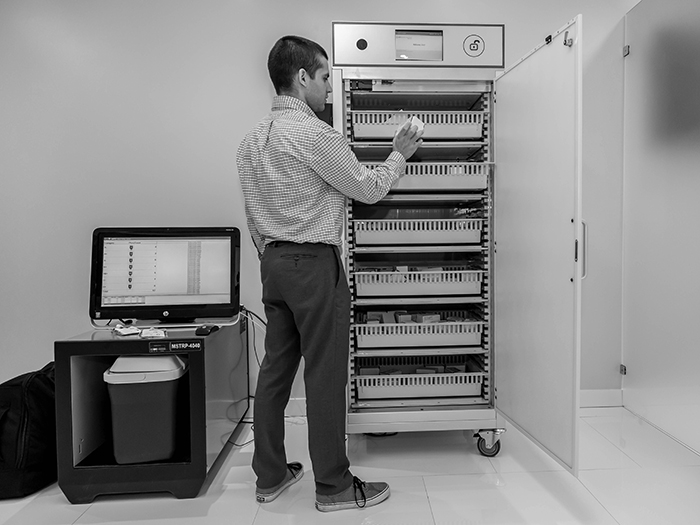 If you want to know how important radio frequency identification (RFID) technology is, Mike Beedles can show you pretty quickly. The president of Sato Global Solutions (SGS) takes a cooler full of bags filled with fake blood and sticks it into a tunnel-like machine. Since each bag has an RFID tag , an attached monitor can immediately list how many bags there are of each blood type. Another system can recognize who is opening a cabinet full of supplies and track what’s going in and out.

Sato Global Solutions is a leader in what are called auto-ID solutions, which use software, machinery and identifiers such as bar codes, RFID tags and QR codes. This year, Beedles and SGS set up a headquarters in downtown Fort Lauderdale, which will be a cloud-based software development epicenter for Sato Holdings, a 76-year-old Japanese company that’s a pioneer in bar code and RFID technology. The company has a history of innovation that ranges from the next-in-line tickets used at deli counters to hand-held retail price labelers, thermal bar code labels and print engines that put bar codes on products as they move through high-speed manufacturing lines.

SGS not only provides products and software, but its consultants provide total solutions that can involve equipment from a variety of vendors. The Fort Lauderdale headquarters has rooms that show scenarios for retailers, warehouses and health care providers. The retail scenario uses a touch screen on the wall to show what garments a customer has taken into a dressing room. This could not only help with theft prevention, but lead to better service if a customer wants a different style or size of a garment, Beedles says.

A lot of Sato Holdings” early growth was tied to big Japanese manufacturers such as Toyota, but it eventually expanded to Europe, Australia and the United States. The company had a U.S. headquarters in Silicon Valley and moved to Charlotte, North Carolina, before announcing the Fort Lauderdale headquarters and the creation of SGS.

Beedles became involved with Sato in 2007 when he was developing his third logistics technology company, TrakIT, which had applications for retail and health care; his software would interface with Sato’s devices. Beedles says Sato’s CEO told him, “I have a vision and I think it aligns with your vision. I want to expand our software business in North America because it is the biggest market in the world. I don’t want to start from scratch. Can you maybe talk to us about an acquisition?”

Although cloud-based software is all the rage these days, Beedles says he found it difficult in 2007 to get customers interested in his use of the concept. He reacted to Sato’s interest by visiting 33 countries where it was operating. He realized Sato was involved in just about every industry because of its bar code technology. He agreed to a buyout and became director of integration and services and development at Sato America.

In 2008, Sato acquired a division of Checkpoint, which gave it a manufacturing plant in suburban Chicago. It also has plants in Daytona Beach and Charlotte.

Beedles, who leads Sato’s overall North American operations, says he also helped Sato make a series of acquisitions from Brazil and Argentina to Russia and Australia. “If you look at all the data this company captures around the world every day, it’s mind-boggling,” he says.

After an extensive search for a new U.S. headquarters, Sato chose Florida because it had the best incentive package. The company zeroed in on South Florida because about 65 Japanese companies already operate here and Latin America is one of Sato’s fastest-growing regions.

The company initially looked at locations in Coral Gables and the Blue Lagoon area next to Miami International Airport, but Beedles says he struggled to find the type of creative environment inspired by his visit to Google’s campus. He was living in Fort Lauderdale and a broker finally found the space at the 110 Tower, which includes an expansive outdoor patio area. The interior has been transformed with the creation of a mezzanine floor. Sato invested $4 million and created 35 jobs.

Beedles, who has a background collaborating with MIT, likes the response he has received from the business community and local colleges and universities. He says, “I think there is a gem here in South Florida that we could grow and really turn into the next Silicon Valley.” ?

1940: Sato Holdings is founded by Yo Sato to make machinery for processing bamboo, rattan and palm.

1962: Sato invents a hand-held labeler that lets the company become a pioneer in price labeling.

2015: Sato announces it will set up the global headquarters for Sato Global Solutions in Fort Lauderdale.