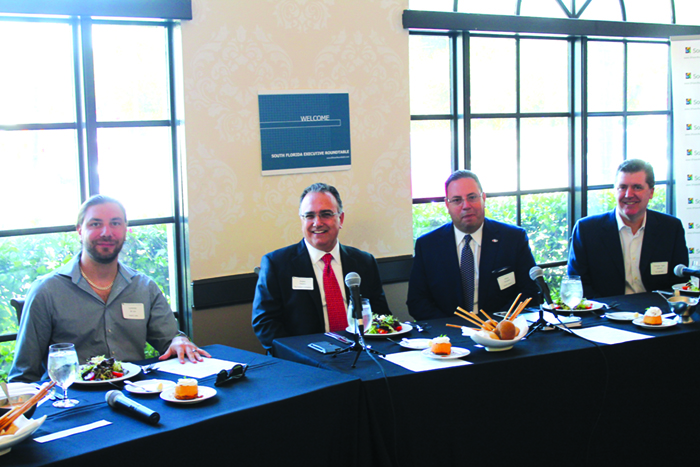 Small steps and long-term focus both have a place

Innovation came in all shapes and sizes at the November meeting of the South Florida Executive Roundtable.

Innovation is a super-high priority for panelists Lorenzo de Leo, managing director of Rokk3r Labs, and Thomas Wenrich, CEO of the The LAB Miami. Both specialize in turning ideas into reality.

Panelist Mario Murgado is in a long-established industry as president and CEO of Brickell Motors, but he talked about how he looks at other industries to get ideas for benchmarking. Andre Teixeira, executive VP and CFO of the Graham Companies, joked that his business could do its monthly operations without computers, but is looking carefully at processes and procedures amid a major construction wave.

SFBW is a media partner with the Executive Roundtable, a monthly invitation-only gathering of senior executives. Here are some of the key takeaways.

Innovation Can Be Small

Rather than spend money on multimillion-dollar experiments, The LAB Miami helps facilitate smaller experiments that are focused on trying to answer specific questions, Wenrich says. If an idea doesn’t work, it goes on to the next one.

He wants to help large companies understand the process and incorporate that as part of their innovation strategy.

Learn from Outside Your Industry

Murgado likes to benchmark to companies in the hospitality industry, including The Ritz-Carlton, Four Seasons and the Mandarin Oriental. He likes Neiman Marcus as a role model in retail. He ranks Best Buy second to Google in digital prowess.

Thinking about creating an innovation unit? Don’t—innovation stops being effective when you put it in a room and put a tag on it, de Leo says. At Rokk3r, innovation is part of the infrastructure of the organization. Everybody is responsible for the innovation in his or her specific area.

Mature Companies can be Deliberate

The Graham Companies is never first to market with anything, Teixeira says. Instead its approach is to apply existing technology to become more competitive, cost efficient and offer a higher level of service. The company has regular meetings about service, but uses slower summer months to take a deep dive into potential innovation projects.

Wenrich talked about the challenges Open English had getting off the ground, even though it has turned into a business with $100 million revenue. Initially, it went to the market offering a free service with ads for its language education section. That wasn’t viable. Then it tried a “freemium” approach where some content was free, but consumers had to pay more. “That was a total disaster. No one upgraded,” he says. The ultimate model that worked was selling on the phone and having live classes.

Training people is the new challenge, de Leo says. The pace of change is so fast that the moment you are done with the training, everything you learned is obsolete. Instead of trying to focus on specific skills, he says it’s more about training people to keep learning and adapting to changes.

Consumers used to walk into a car dealership with a newspaper under their arm, but now they are unlikely to come in without having done research on the internet, Murgado says. The modern automotive salesperson must be a great listener and an information specialist to answer remaining questions.

He also wants to break down barriers from customers to let them communicate directly with repair technicians. If a technician can send a picture to a customer’s smartphone and engage in conversation, that’s a plus.

Be Aware of Long-Term Trends

While the Graham Companies is focused on the near-term about having the right processes and systems in place for developing a lot of new projects, Teixeira is also keeping an eye on the possibility of autonomous driving cars.

Right now, people want to park close to buildings, but what if the car of the future could drop you off and park five or six blocks away? That would have a major impact on developers, he says. ↵