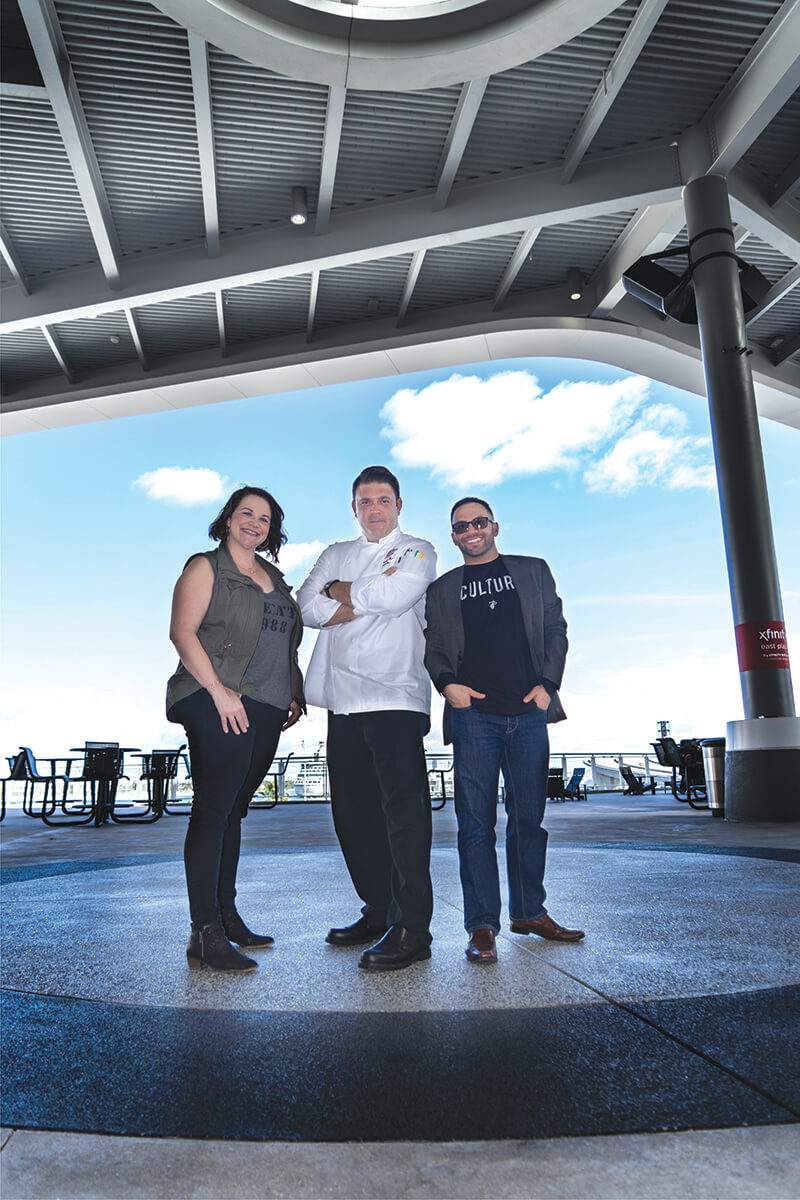 Inside the Heat’s House

Innovation takes center court on the business side By Kevin Gale

f you think the Miami Heat’s victories are all on the court, there’s a story you should know about their success as a business operation.

The Heat are bringing a roster full of innovative practices that are gaining attention across the NBA. Among them:

• Becoming the league’s first team to commit to moving from paper tickets to total e-ticket entry.

• Ranking first during the 2016-17 season in an NBA customer satisfaction program called Elevate.

• Keeping its No. 1 ticket ranking among Florida arenas, while climbing to No. 4 from No. 7 nationally, according to 2016 Pollstar data.

The Heat have won three NBA championships (2006, 2012 and 2013), and have reached the finals twice more (2011 and 2014) under president/general manager Pat Riley, coach Erik Spoelstra and the Arison family as owners.

“It’s Eric’s vision for everything we work on. He gives us the resources and defines the vision and gets out of the way,” says Matthew Jafarian, vice president of digital strategy and innovation. The NBA is known for being progressive when it comes to technology, and Woolworth’s goal is to bring Silicon Valley to Miami.

One example is mobile entry. At the end of the 2015-16 season, only 8 percent of Heat fans were using mobile ticketing to enter AmericanAirlines Arena. This season, the team wants to be the first NBA team to achieve mobile-only entry with its revamped app for smartphones. The “mobile wallet” aspect of the app can be used at any point of sale in the arena and has boosted purchases by 90 percent.

The app provides news alerts about the team and builds on the Heat’s social media base of 15.9 million Facebook fans, 4.4 million Twitter followers and 2.9 million Instagram followers.

The team has spent five years building a business intelligence team that mandates the use of data and analytics across the business to improve results, performance and customer relations.

Analyzing data from the app helps the team understand particular fans’ behavior to give them a more relevant experience, Jafarian says. For example, a family might get a family meal deal from Papa John’s rather than a buy-one, get-one offer.

Attendees also get $3 in “arena bucks” — which can be used inside the venue — for every $50 they spend. The Heat are the only NBA team to use an app at every point of sale.

But other NBA teams are calling, Jafarian says. “Everybody is looking at us as the beacon as how to do this.”

While every team sells sports apparel with player names and numbers, the Heat were the first to create a lifestyle brand, called Court Culture. This season, the Heat became the only NBA licensed clothing design company to open its own store in the arena.

The effort is led by Jennifer Alvarez, chief of creative and content, who started as an intern in 2004. While many teams outsource a lot of their marketing functions, the Heat do everything in-house.

The Court Culture apparel offers a subtle way for fans to show their allegiance to the team and Miami itself. The “305” shirt has just a hint of the team’s fiery basketball and hoops logo. Another shirt proclaims it’s “For Competitors Only” and has a tiny rendition of the logo.

“The team is local and we feel strong about the city itself. It’s important to develop a brand that’s a love letter to the team,” Alvarez says. “We are able to cater to not just Heat fans but people who are proud to be a Miamian.”

Some of the merchandise, such as a beach towel, pay homage to the team mantra: “The Miami Heat, est. 1988. We are the hardest working, best conditioned, most professional, unselfish, toughest, meanest, nastiest team in the NBA.”

There also are ways fans can recognize their favorite players without wearing a jersey. Some merchandise features photos of players amid special moments while others have fancy script, such as one that proclaims “The Brothers Johnson,” in honor of Tyler and James Johnson.

The merchandise is sold at themiamiheatstore.com, at the arena and at the team store at Dolphin Mall. A standalone store is in the works as well, Alvarez says.

The Heat’s Biscayne Boulevard address is the new name for the former Bongos restaurant and event space, which is just across the terrace from the arena.

Executive chef Jarod Higgins is partnering with Pubbelly Sushi to bolster the variety of food at 601, a 11,500-square-foot, two-level space overlooking Biscayne Bay and the city skyline.

Higgins says the goal is to go beyond the typical arena food of hamburgers, hot dogs, soda and beer and also embrace the diversity of Miami’s culture. The menu for the Tumbler and Decanter lounges at 601 include Peruvian-style ceviche, freshly shucked street corn, chicken empanadas, Funky Buddha Floridian beer and Wynwood Brewing Pops Porter. Yes, there’s a burger, but it’s made out of hormone-free, grass-fed beef from Fort McCoy Ranch near Ocala.

601 is open during all the games, concerts and other events at the arena. The upper level, which is a bar and gastropub, can hold 117, while the downstairs is more of an event space that can hold 220 people.

Higgins is in charge of food throughout the arena as well and has an army of six sous chefs, 79 cooks and 12 supervisors.

The pace can be hectic, and Higgins often recharges himself with cafecitos as he works 70 to 80 hours a week. But he says, “I don’t think about hours. It’s fun what I do.” ♦

• Webby Award: Sports Apps, for content, navigation and visual design of the team app, from the International Academy of Digital Arts and Sciences.

• First environmental Innovators of the Year (NBA Category): By the Green Sports Alliance.

• LEED Gold Recertification for the arena from the U.S. Green Building Council. It’s the first sports and entertainment facility to receive the honor.