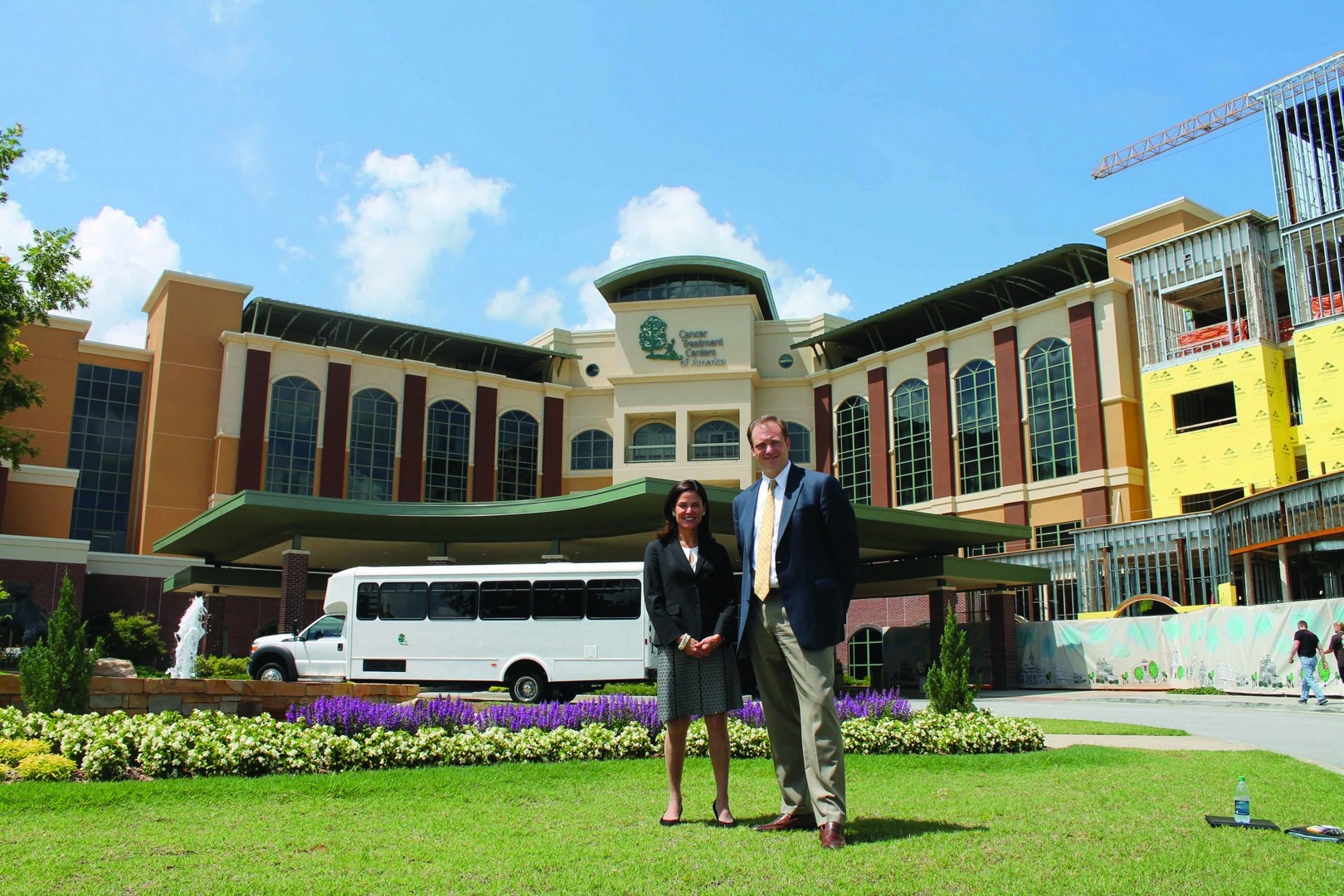 An inside view of CTCA’s southeastern U.S. hospital

Sharon Craig says she was told to get her affairs in order because she had stage 4 uterine cancer. Her mother suggested she look into Cancer Treatment Centers of America. Craig hesitated about calling at first, but more motherly prompting caused her to engage in a webchat on the company’s site. Rather than getting a hard sell on the hospital’s virtues, she ended up chatting more about her hobbies and where she lived.

“Can I call you?” she was finally asked. There were no promises of outcome in the subsequent telephone conversation, just a message that everything possible would be done. She could expect a letter in a few days and would stay three to five days for a comprehensive evaluation and outline of her treatment options.

Craig has now finished her chemotherapy and is full of enthusiasm as she says hello to a visitor in the lobby of CTCA’s Southeastern Regional Hospital. The rotunda looks like it belongs inside a five-star resort with its saltwater aquariums, marble floor and huge vase of flowers.

The lobby sets the tone for the patient experience, which includes cuisine prepared by a former Ritz-Carlton chef and wood-paneled patient rooms with Internet-enabled flat-screen TVs and medical equipment stored out of sight in wooden cupboards.

The atmosphere is designed to be uplifting at a time of challenge for the patients. “Not only are you in pain, but emotionally, you are sick and tired of being sick and tired,” Craig says.

While Craig lives in Atlanta, for many patients, the experience starts at Hartsfield-Jackson Atlanta International Airport, where the hospital’s transportation staff offers a limo pickup service. The 20-minute ride from the airport ends with a drive up Celebrate Life Parkway.

Workers were busy putting on a major addition to the hospital when SFBW became the first South Florida publication to get a tour.

Hospital CEO Anne Meisner says 65 more hotel rooms are being added to the 60 that are already in the building. Why hotel rooms? One reason is the state has a cap of 50 patient rooms where treatments can be provided, which helps protect the business of other hospitals in the area. Meisner says on an average night, 250 patients are staying outside of the property and receiving treatments during the day.

A notable feature behind the reception desk are the portraits of founder and chairman Richard J. Stephenson and his mother, Mary, whose death prompted him to create a company that would offer integrated, cutting-edge medical care that also included nutrition and spiritual support.

The nutritional support helps patients deal with side effects, such as nausea, and avoid malnutrition, says Ryan Huber, a CTCA professional relations manager. Ginger, for example, might help with queasiness.

The hospital just opened in 2012, but a Tree of Life in the two-story main hallway is ready to list five-year survivors. Every spring, CTCA hospitals host a two-day celebration with the survivors and the Stephenson family.

The main corridor has a spa, gift shop and a display for Ashion Advanced Individual Medicine, which offers genomic testing used to anticipate how the body might respond to treatments. The patient floors above are carpeted, unlike most hospitals, which is a telling detail. “Patients say footsteps in the hallway create anxiety,” Huber says. The infusion treatment bays at the hospital also offer privacy, in contrast to some hospitals where patient sit in a circle and look at one another during sessions that can last five hours.

Chef Roy Khoo gave a behind-the-scenes tour of the hospital kitchen, which turns out gourmet-quality fare. He was a chef for Ritz-Carltons in Bali, St. Thomas and Atlanta. His office has a row of ribbons he’s won from chef competitions. He emphasizes fresh, organic ingredients from sustainable sources. He and his staff work closely with Crystal Langlois, manager of nutrition, to customize menus for particular patients” needs.

Talking with an array of staff members and executives, it’s clear the hospital puts a major emphasis on collaboration that keeps patients informed as part of the decision-making process.

The first two days of a visit typically involve going over patient history and conducting tests, which are reviewed by a number of specialists, including 15 oncologists. Treatment options are typically discussed on the third day.

Under the collaborative care model, the various specialists can say, “We’ve all sat down and looked at your information and here’s what we recommend,” Meisner says.

“It’s the integration for the patient that allows us to do things in minutes and hours that takes traditional medicine days and weeks to accomplish,” says COO David Kent. CTCA has found the model is appealing to businesspeople, who don’t want appointments strung out over weeks.

As a general medicine practitioner in the Boston area, hospital chief of medicine Jeff Metts says he was frustrated at the difficulty of communication and collaboration in developing treatment plans for cancer patients. “Now, if I want to see a specialist and have a pressing question, I can knock on their door,” he says. His department oversees arriving patients, manages non-cancer issues such as high blood pressure and heart disease and helps transition patients to the oncologists.

Dr. Brion Randolph, chief of medical oncology, has seen the hospital expand from two oncologists to 15, which allows each one to focus on a specific area. His choice has been hematology, and he has support from two hematopathologists. If he sees a rare lymphoma or leukemia, he can walk down the hall to confer and look at slides with them.

CTCA is known for dealing with complex and advanced cancer, but word of mouth and its TV advertising campaign appear to be having an impact on when patients first make
an inquiry.

Randolph says 60 percent of the patients in the hospital are now arriving for a second opinion, often after an initial diagnosis by a medical generalist. In the past, it was more common for patients to be seeking a third or fourth opinion.

When asked whether the ubiquity of CTCA’s TV ads could make some consumers think the company is just about marketing, Kent says patients are pretty discerning about what they want; and with multiple treatment rounds, you can’t build a trap at the front and not deliver on the quality of care.

Meisner notes the hospital has a five-star rating for patient satisfaction from the Centers for Medicare and Medicaid Services – so do the other three CTCA hospitals that accept Medicare patients. Only 7 percent of eligible hospitals get that rating.

Aftercare is another part of what CTCA does. It has formed Cancer Fighters as an information source for the public and a support group to help people on their journey.

Craig says CTCA has helped her understand how to cut down her level of stress as she looks at continuing treatment with a pill every other week for a year. “When you are in survivorship,” she says, “it’s all about you.” ?