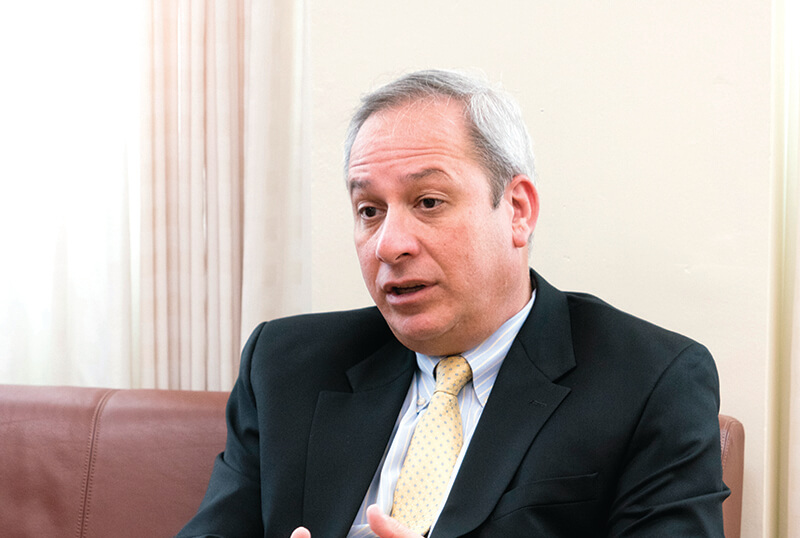 Lester Sola might be dubbed the “Mr. Fix-it” of Miami-Dade Country government. He has reorganized several county departments, including elections, refocused a multibillion capital program at Miami International Airport and served as director of the water and sewer department.

In February, he assumed one of the most high-level business roles in South Florida: director and CEO of the Miami-Dade Aviation Department, including oversight of Miami International Airport.

MIA ranks first among U.S. airports in international freight, third in international passengers and 10th in total passengers. It had 44.1 million passengers in 2017. On a weekly basis, that’s equivalent to the combined populations of Miami, Miami Beach, Fort Lauderdale, West Palm Beach and Boca Raton taking off or landing at the airport.

SFBW interviewed Sola at the department’s offices, which are tucked away in an upper floor of the central terminal at MIA. The following interview has been edited for brevity and clarity.

If you were going to give a “state of the airport” type overview, what would you say?

I think, exceptional. Even though last year traffic was down 1 percent as a result of the hurricanes, the overall forecast continues to be strong both in passenger and in cargo.

We continue to trend around a 3 percent increase in passengers. We’re not just the gateway of the Americas for all travel to South America, Central America and the Caribbean, but we also operate as a significant hub to many of our airline partners domestically, too, so it kind of feeds into each other. We have a very good blend—ideal, really—at about 50/50 in regard to international and domestic.

We continue being the No. 1 U.S. airport for international cargo. It’s important for people to understand that cargo is not just a cargo-only plane, but the majority of all our passenger flights come with cargo in the bellies of planes. In the past, we have ranged from 6 to 7 percent growth.

There was a wave of construction at the airport. Is it pretty much over?

The department was involved in a very large capital program that ultimately ended up in the neighborhood of around $6 billion. It’s been completed. Right now, we are in the process of determining what the size of our capital program for the next decade will be. You want to make sure you remain competitive by not overspending but spending at the right mix so you can continue to be as low on cost as possible for airlines to fly in and out of Miami International Airport.

One of the big items is building a new airport hotel. That’s a significant investment by this airport. The delivery vehicle still needs to be determined—whether we do that as a P3 engagement [a public-private partnership] or if owner-financed is an option.

We are also looking at redoing the central portion of the terminal. While we did a significant investment in the northern terminal and the southern terminal, there are areas of the central terminal that need to be redone. Those are interim programs with significant dollars, in excess of a billion dollars, to redo that program.

We are about to launch it. There are opportunities for the ultimate redo of that terminal that would be even more billions of dollars into the future.

I think it’s really a milestone the airport has reached. It wasn’t too long ago, that in our nation’s airports, the majority of the restaurants and shops were without brands. They were just generic restaurants. Now, with the marketing ability we have to leverage brand names of restaurants and shops, it really helps with the clientele and leverages the expertise they may have in branding, selling and retail. In food and beverage, it allows the traveling public to entertain and enjoy the experience of flying, whether right before a flight or after a flight to be able to participate in an experience they are familiar with.

I read that you have a focus on cleanliness at the airport.

It’s a big point for me. Oftentimes, your first experience in a city after you step out of that airplane is that image of the terminal. We have exceptional terminals in the north and south. We are looking to have that same experience in the central area of the terminal. For me, it’s important for our traveling public that we have restrooms and overall cleanliness of our terminals.

What’s the impact of Uber and Lyft and the changes in 2016 to make them legal to serve the airport?

Significant. I think 60 to 70 percent of our dropoffs are Uber and Lyft vehicles.

More and more people are taking that form of transportation to and from the airport, so there’s an impact on parking garages. At one point, it was difficult to find a space. Now there is space. So you have to be looking to the future and saying you don’t need as much parking garage space and asking how are you going to develop that land.

You had a trip to Asia, and it’s been a long-term quest to get direct passenger service. How did that go?

It went well. Just like every other market we have pursued and attained, it takes time. There’s nothing like being face-to-face and asking for the business of these carriers. You have to make the business case that it’s going to be profitable and worthwhile to invest in a route from Asia directly to MIA. We have a couple of potential clients, airlines that we are working with.

Originally, we pursued a direct cargo flight from Asia to MIA. We were able to forge a partnership. We had one airline with one flight a week. That airline is now up to four flights a week. Now, there are three airlines flying cargo. One recent addition came as late as March this year.

I think passenger [traffic] is the next inevitable step where we can provide the stats. We have the numbers, where you have over 300,000 to 400,000 people yearly that are flying through this airport and ending up in Asia. There are those people who are connecting here and would like to get a direct flight to Asia.

What changes are you seeing in cargo? What is the impact of Amazon?

E-commerce has been the driving force of growth for cargo volume—not just at this airport, but also Miami-Opa Locka Executive Airport, which is experiencing significant, almost explosive, growth. As far as the development taking place at that airport, it’s all cargo-driven and all e-commerce-driven. It’s really what has driven the cargo volume numbers.

Do you have more room for industrial warehouses on aviation department property?

There is some growth taking place here with our current operators, such as the UPS and the FedExes of the world. They are continuing to look for expansions, and they have expansion programs in the airport right now. Amazon’s Prime Air is flying here.

As far as other companies outside of MIA, they are showing their growth at our other airports. Amazon is building a very large distribution center at Opa Locka. Several other cargo operators have expanded. There was a point in the 1990s that we knew Opa Locka was going to be the reliever airport for cargo and it took a while for it to take off, but now every space at Opa Locka has been programmed with regard to how the space is going to be used. The demand is ultimately going to be tapped out at Opa Locka. The next logical place we would go to is Miami Executive Airport in Kendall.

Talk about private aviation at the airports here. How is that growing?

The majority of that growth takes place at our general aviation airports. Opa Locka is in the single digits, 1- or 2-percent growth. Miami Executive Airport is looking at 6- to 8-percent growth. Homestead General, which is even closer to the Keys, was looking at 15 percent last year. People are choosing those general aviation airports. They are easy to get into and out of. We have a lot of FBOs [fixed-base operators] that are making sizable investments in facilitating the visits.

How would you describe your management style?

I’m pretty easy-going, but very involved in the details. I’m a hands-on kind of a guy, wherein I don’t always get my information from senior management. I can only give you my recent experience at water and sewer, which has 2,300 employees, $13 billion in capital. Oftentimes, I would pull over by the side of the road where the employees were working and introduce myself and really have a conversation with them. Oftentimes, you get your best information from the people down on the ground and doing the work.

I was impressed by your ability to have multiple high-level positions in the county, because people in those positions can be scapegoated or are a lightning rod for criticism. What’s your secret?

It’s transparency. People refer to me as a straight shooter. With the mayor or commissioners, I have a rapport with them—no matter where I’m sent, whether it be in the water and sewer department, and at one point, I was even an election supervisor after they had some issues.

It’s really an opportunity to interact with people and tell them what the problem is from your perspective, and you have to tell them how you are going to fix it and how you are going to manage going forward. If you run into problems along the way, you can’t just eventually let it come up. You have to be able to tell folks, “Hey, look. We were going in this direction. This happened. In order for us to fix it, we are going to do X, Y and Z and we’ll be back on the path.” ♦

The view from the roof at Sola’s office