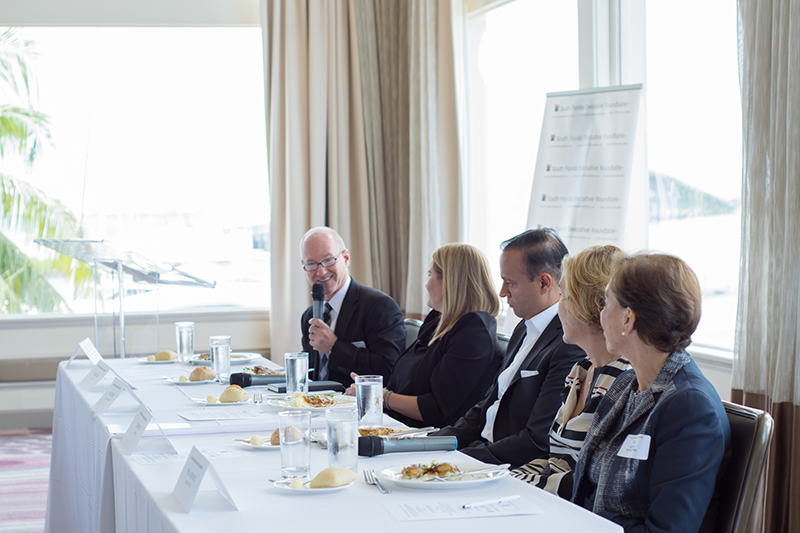 At the September Executive Roundtable, moderator Alex Freund, president and chief information officer of 4IT, kept things lively when he sprinkled the conversation with quotes by famous business folks and asked the audience to guess who said them. For example, “Innovation is not about how many R&D [research and development] dollars you have. … It’s about the people you have, how you’re led, and how much you get.”

Freund then asked the panelists how their respective organizations define innovation.

WE Family Offices CEO and managing partner Mel Lagomasino said, “I think Steve was right. And I also think it’s about having an open mind.”

World Fuel Services Senior Vice President Nikka Copeland said her company is in the middle of a business transformation. “The ultimate goal is to create an atmosphere of safety, so people have the courage to challenge the status quo, change things, and, most important, fail.”

Zia Bhutta, board chairman for Accelirate, which specializes in automation, chimed in, saying: “I think the key word is ‘value.’ Innovation is about doing something more efficiently. It is also about figuring out new ways of doing things. What we see in enterprise today is, we have different approaches to innovation. As long as value is the core thing that you’re looking for, your R&D dollars, anything you spend on innovation would benefit.”

Melissa Doval, interim CEO for Kairos, a software company specializing in facial recognition, said, “If you find the right people to drive changes needed in your organization, you become a company that’s constantly improving, and you’ll always be ahead of the market. Right now at Kairos, they are thinking about what facial recognition is going to look like 10 years from now, not next year. We are a small Miami misfit that is trying to compete against Amazon and Microsoft.”

There’s a fear that robots might replace many jobs in the future workforce, but Bhutta says otherwise.

“We are a 2-year-old technology company in the robotics and artificial intelligence space,” Bhutta says. “We are not just deploying the technology that exists today, but we are also thinking about what the world is going to look like in three to five years, when you are going to probably have thousands of these software robots. It’s a big, open question whether robots are going to replace people, or are they going to augment people? So far, what we see is that the robots are actually assisting people.”

Copeland pointed out that it’s the C-suite’s job to enable innovation. “That’s how we look at it, and I come from an old-world company. We move fuel around the world for our customers. And that includes oil, gas. We are inundating our business with technology.”

Lagomasino says innovation has been interesting because of being a small shop striving to deliver customized solutions and to meet customer demands. “As a C-level executive, we always have to take a step back. I think there’s a discipline to innovation as well: understanding what the needs of the market are, understanding what is going to serve the ultimate goal of your customer and delivering on that. You need to put a structure together to make sure things get done.”

With innovation comes failure, Freund said before asking his fellow panelists what their takeaways are from failure. For Bhutta, it’s all about acknowledgment and the timing.

“I have a product company as well,” Bhutta says. “And then, I knew it was a failure when the product hit the market. The team, including the CEO who I hired, didn’t see it that way. They just felt that we could go on for a little bit longer. You have to be able to recognize failure, just like I did, and you have to be able to motivate the team to move on from it and guide them when it’s time to go back to the drawing table. And if you have to pivot, then pivot. And that is very fundamental for a product company, which will require you to go through several pivots before you can find success.”

Lagomasino gave an example from the Coca-Cola Co., which innovates products all the time. “There are some products that they launched that are a true success, like Coca-Cola Zero. And then there are products that launched that are a true failure—Coca-Cola Light was one of them. You have to have discipline when you fail to take it off the market and not have a lot of zombie runs that are out there. On the other hand, sometimes it takes a little longer for a product to take off. And you have to have the patience to keep investing in it until it takes off. I think this thing with failure—knowing first of all how to define it and then having the courage to stick to it if you think it’s going to take off, but also the courage to kill the zombies that are using up a lot of resources—is really critical in being successful.”

Doval also found timing to be an issue. “We got really excited about blockchain and cryptocurrency,” she said. “We developed a protocol to transact on the blockchain, and you can actually send currency through our protocol and verify that you did it. And we thought that was the most brilliant thing we’ve come up with. We launched it open-source and we thought this product was totally going to take off and then … crickets. What we realized was we were way ahead of everybody else.”

Freund then asked about where they are sourcing talent—here or elsewhere. Copeland made it clear that successful talent attraction starts from within an organization. “If your employees are happy and energized, they will talk to their friends,” she said.

And she went on to say that World Fuel prefers to groom people from the inside because it takes a while to understand the ethos and how things work at the company. “It is a huge investment of time and resources to bring people from the outside,” she said.

Bhutta moved to South Florida in 2010 from New Jersey and recommended companies recruit candidates from the local universities, especially in the technology sector. “We do a lot of hiring at the local colleges, and most of that talent doesn’t have too many options in tech in this market, and for us, graduates are a great option.”

Doval agreed. “I think good talent is difficult to find anywhere you go. University graduates are cheaper and don’t have the bad habits that most people develop throughout their years of work.” ♦

Mel Lagomasino, CEO and managing partner at WE
Family Offices and board director of the Walt Disney Co.,
the Coca-Cola Co. and the Americas Society.

Zia Bhutta, chairman of the board for Accelirate, an automation company.