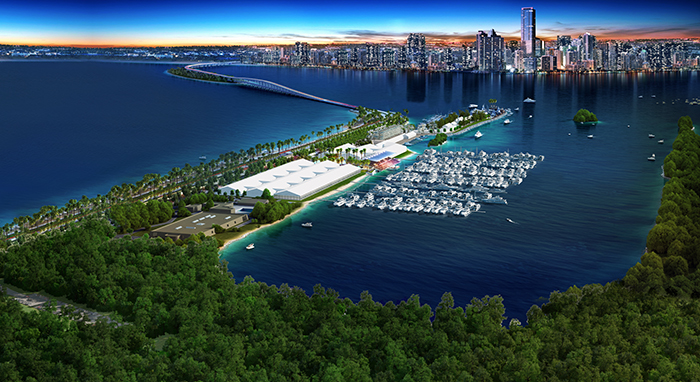 This year, the Miami International Boat Show has packed its bags and moved to a new home on Virginia Key.

The show, which is celebrating its 75th anniversary, will be held on Presidents Day weekend at its new location, the iconic Miami Marine Stadium and Basin. The show opens Thursday, Feb. 11, and runs through Monday, Feb. 15, and is expected to attract more than 100,000 boat enthusiasts from around the world, with an estimated local economic impact of $597 million.

Boat Show Manager Cathy Rick-Joule is pleased with the new venue. “We found the perfect location,” she says, her voice beaming with excitement. “This gives us the opportunity to ‘marry’ both the in-water and upland components of the show. This will provide for a wonderful consumer experience, a new show at a legendary site. It is a beautiful open-air stadium that was designed to view actual in-basin activities in front of it.”

However, Rick-Joule notes that the stadium still needs renovations and will not be ready in time for the 2016 show. The tent city and docks, which have been built for the show, are only temporary structures and will be removed after 10 days.

Not everyone is delighted with the boat show’s new home. Residents of nearby Key Biscayne fought the proposed move, citing concerns about traffic and parking. Likewise, environmental groups have been wary of the show’s potential impact on local marine life. Litigation continues concerning the Virginia Key site and some residents question whether the boat show’s new location will be only temporary.

The boat show had to leave its old location at the Miami Beach Convention Center because major renovations were being made. Rick-Joule credits the city of Miami with recommending the new location. “It’s perfectly suited for the type of event the boat show is,” Rick-Joule says. “This will give people an opportunity to see what’s available in the industry, from boats to accessories to engines.” The new site will also have ample parking.

The Miami International Boat Show began in 1941 under one tent with only 50 boats. The 2016 show features 1,200 new boats, with more than 400 of them in-water. Products range from luxury yachts, sport fishers, high-speed performance boats, family cruisers and runabouts. The newest in boating technology, gears and accessories are also available.

A stand-alone sailboat show called Strictly Sail Miami will feature 125 sailboats at Miamarina at Bayside. The separate venue will also feature dozens of daily seminars as well as sailing gear. A free water taxi and shuttle bus service will be available between the two sites. “Now we have the ability to transport customers,” Rick-Joule says.

An added feature for 2016 will be an area called “Try It Cove.” It will be used for hands-on activities such as power boarding, kayaking, canoeing and sailing.

And, if you’re interested in seeing a slice of our area’s marine history, the show will also feature three iconic boats special to South Florida:

• Pilar, a fishing boat built by Wheeler Shipyard that is a replica of Ernest Hemingway’s famous boat, which inspired many of his classic works;

•and the Carol Suzanne, a vintage South Florida racing boat.

The Miami Marine Stadium and Basin is located at 3501 Rickenbacker Causeway, Key Biscayne