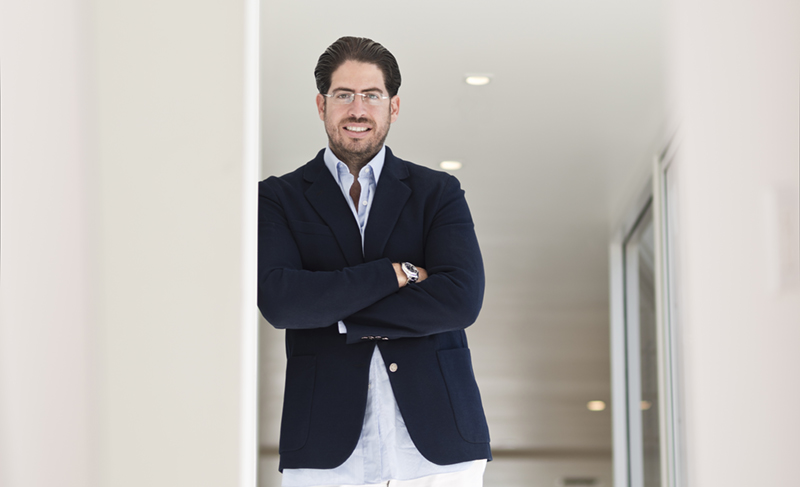 Terra Group looks for neighborhoods that are more than just hot

Terra Group CEO David Martin says it’s all about the neighborhood and who the buyers are.

He and his father, Pedro, started out in South Beach when they launched their company in 2001 and now have 19 residential projects listed on their website. They were one of the pioneers in creating a sense of place near shopping centers with the two-tower Metropolis across from Dadeland Mall in Kendall. They delved into the Edgewater area in Miami, when it was rough around the edges, and have been a major influence in the rebound of Coconut Grove with the Bjarke Ingels-designed Grove at Grand Bay and the Rem Koolhaas-designed Park Grove.

Some of Terra’s projects mix residential and commercial, such as Doral Commons’ 319 homes and 140,000 square feet of retail anchored by Publix and T.J. Maxx. Pembroke Pines City Center will be a 47-acre mix of retail and multifamily homes next to the new Pembroke Pines Civic and Cultural Center.

Like a number of other developers, he’s intrigued these days by Little Haiti, which is just north of the trendy Wynwood neighborhood, and Allapattah, which is near Jackson Memorial Hospital.

SFBW caught up with Martin at the sales center for 87 Park, an oceanfront project at the northern edge of Miami Beach. Terra donated $10.5 million to help improve North Shore Park next door and 87 Park also will have a private park for residents. Martin is hoping the city seeks proposals to redevelop the blocks of property across Collins Avenue that could create an additional sense of community.

Martin showed how the model for 87 Park appears to float above its surroundings. One feature in the design by Renzo Piano, a Pritzker Prize-winning architect, puts the parking underneath the building so there isn’t an unsightly parking podium.

The lobby is designed to resemble a French l’orangerie, a greenhouse type of structure that estates used to protect fruit trees from harsh winter winds. RDAI of Paris is doing the interior design with a color palette that harmonizes with the ocean and sand.

The 87 Park site has sand dunes filled with vegetation and a walking path that goes north to Haulover Inlet and south to 63rd Street. On sunny afternoons, the water has the shimmering turquoise color found in Caribbean beaches.

Both of Martin’s parents were Cuban exiles who arrived in 1961. Martin was born when his father was going to law school at the University of Florida in the mid-1970s.

Pedro Martin subsequently became one of the first 20 attorneys at Greenberg Traurig. He had many banking and development clients, which helped open his son’s eyes to the possibilities of working in the industry.

While earning an MBA and law degree at the University of Florida, David Martin opened a coffee shop in Gainesville without getting permits. That turned into a learning experience on how building departments and code enforcement work, he says. The coffee shop became a successful pre-Starbucks-era venture with 20 employees.

However, David told his father that he wanted to start doing deals. During his last year in college, they started acquiring sites in Miami Beach and he began to learn what it was like to be a developer.

Terra’s first project, during his last year in college, was the six-story, 33-unit Nautica, which is about 20 blocks south of 87 Park near 63rd Street.

Pedro Martin was still practicing at Greenberg Traurig when the firm was launched and his son worked out of a coworking space on Brickell Avenue.

“He really let me fly and make mistakes,” David Martin says. “He helped bring a lot of doors open, whether in banking or investments. He had a reputation as a good person with integrity. I had a leg up more than a typical startup for a 23- or 24-year-old.”

David Martin says learning to be a developer was like being in the hub of a wheel, interacting with banking, construction, marketing, sales and legal professionals while thinking about the consumer experience that could be created.

“I wanted to be a value creator more than a speculator. There is a lot of great emotional reward to be able to develop and create these structures and have people experience them—convert the not-so-great into great,” he says.

He learned a lot about the character of people in different economic times and how to be sensitive to community activists. He found it was important to be more of an educator than a seller, not only to prospective purchasers but to neighbors.

“Every neighborhood has a different characteristic,” Martin says. “You want to try to work in that DNA rather than impose a preconceived idea.”

Terra kept working on projects on Miami Beach, but he saw opportunity in suburbs, such as Dadeland and Doral. Cities were trying to create downtown areas and other developers were not appreciating how scarce the land supply was.

A few years ago, at Botaniko in Weston, he saw an opportunity to provide new housing stock in an affluent area that was lacking it.

Terra similarly fueled the comeback of Coconut Grove with Park Grove and the Grove at Grand Bay.

Grove at Grand Bay gained widespread attention for how its floors twist as the buildings get higher. Some critiqued it as looking like a pile of bar napkins.

To architect Ingels and Martin, though, the design maximized the views and public space while allowing the buildings to relate to each other.

In mid-February Terra announced it is teaming with Mayfair Real Estate Advisors to create the first new Class A office space in Coconut Grove in more than two decades. Touzet Studio has been hired to transform part of a public parking garage into Mary Street, which will have retail on the street level and 75,000 square feet of Class A office space.

“Our plan for Mary Street will reactivate a dated, underperforming garage through adaptive reuse that generates additional tax revenue for the city without exploiting the site’s full allowable density,” Martin says. He wants the Grove to keep its village-like character, but he also sees an opportunity to provide amenities for residents at the new condominiums.

Terra was one of the pioneers of redevelopment in Miami’s Edgewater neighborhood with Quantum on the Bay, which has 51-story and 44-story towers overlooking Margaret Pace Park, which had an unsavory reputation.

Martin says people’s perceptions of a neighborhood are changed by their experiences, so he collaborated with the arts community to hold events in the park, including a film festival where he provided a check to the winner.

Similarly, Terra underwrote much of the marketing to gain public support for the general bond issue that transformed Museum Park into a cultural centerpiece.

Of course, there can be bumps in the road.

Terra bought Miami’s Freedom Tower, famous for processing Cuban immigrants, and nearby land, but it encountered public outcry over the size of a proposed development behind the tower. The tower was donated to Miami Dade College, and Terra subsequently sold the land behind it to an Argentinean investment group.

The site has potential for a simple and elegant development, Martin says. “That part of downtown has a strong need to be intense and developed because it’s kind of expanding downtown.” ↵