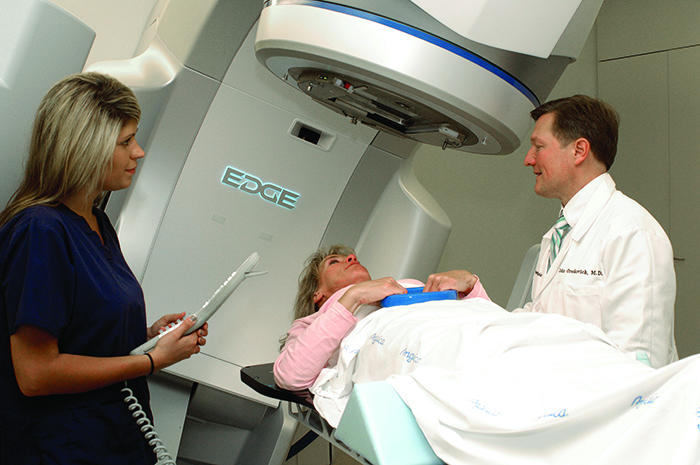 Medical experts used to treat most cancers by focusing solely on the tumors themselves. But with ever-advancing technology, today’s specialists can not only look deeper into the cancer cells themselves, but also into a patient’s own genetic makeup and how it interacts with the disease process. This better understanding of tumors has led to what doctors are calling “targeted and precision” techniques of treatment.

“More and more treatment is based on the genetics of the patient,” says Dr. Omar Rashid, a surgical oncologist at Fort Lauderdale’s Holy Cross Hospital. “We’re looking more at the genetic expression of the tumor itself – not what it looks like under the microscope, but what it looks like genetically.” In other words, today’s cancer specialists and researchers are more focused on the genetics of a tumor, rather than the specific type of malignant cell.

Studying – and storing – each patient’s genetic profile over time is leading to better and more targeted treatment methods, says Paul Papagni, executive director of Holy Cross Hospital’s clinical research program. He looks forward to continued advances in the field. “We are at the threshold,” he says.

“First and foremost with precision medicine is getting the correct diagnosis from the beginning,” says
Dr. Stephen Nimer, director of Sylvester Comprehensive Cancer Center in Miami. “We have many more ways of doing that. We can now subcategorize the different types of cancer cells with a lot of attention being paid to genetics. That can lead to specific forms of targeted therapy.”

Of increasing importance today is the use of immunology in the battle against cancer. Cancer immunotherapy uses the body’s own immune system to fight cancer. “We want to make the immune system stronger and the cancer cells weaker,” Nimer explains, adding that specialists are using combinations of immune system-bolstering drugs and anti-cancer cell medications in what he describes as a “tug of war” battle.

As an example, Nimer says some cancer cells are able to camouflage themselves, going unnoticed by a person’s own immune system. Immunotherapy drugs are now being developed – with good results – to strip off this camouflage and allow the body’s antibodies to recognize and destroy the malignant cells.

Dr. George Daneker, surgical oncologist and chief medical officer at Cancer Treatment Centers of America, which is headquartered in Boca Raton, says, “The cancer cells disguise themselves as not being foreign to the immune system’s protective T cells, and say, ‘Don’t eat me.’” This new class of immunotherapy drug has shown great promise in fighting metastatic melanoma and even advanced forms of lung cancer.

Dr. John Greskovich, medical director of Cleveland Clinic’s Radiation Oncology department, has seen significant changes in the use of radiation to attack many types of cancer cells. “We are using higher doses of radiation over shorter courses of treatment,” he says. “We have more improved methods of targeting and delivery in one to five treatments. Tumors are destroyed when radiation is delivered over one to five treatments.”

Greskovich says doctors are now using high doses of radiation with today’s technology in place of traditional, invasive surgery. “We can now perform radiosurgery with the most modern, advanced equipment called Varian Edge,” he says. Varian Edge enables doctors to more accurately localize and target tumors while minimizing any potential damage to healthy body tissue. Medical specialists are able to use advanced imaging while administering radiation doses. “This allows us to demarcate the tumor from surrounding tissue,” Greskovich says. “We can also estimate damage to surrounding tissue.”

By utilizing this new method of targeting tumors with high doses of radiation, the curative rate of stage 1 cancers is now 85 to 90 percent, Greskovich says. But one caveat remains: “We do have to catch it at a small size” he says. “If larger, we can destroy the tumor, but it might have already spread.”

The Varian Edge has the highest dose rate in the industry, Greskovich says. “We localize the tumor and aim the beam,” he explains, adding that major progress has been made in cutting down on a treatment’s side effects. “When done precisely, patients go home without side effects. Almost no one has side effects if treated this way. We don’t want them to have side effects or have to change their lifestyle in any way.”

Daneker says the technology behind CT scans and MRIs hasn’t really changed that much in improved diagnostics. “It’s really the software,” he says. “New software is being developed with better delineation of images.”

With better-defined imaging, more precise treatment methods will result. “There’s greater indication for both surgery and radiation, but with greater precision in the application,” Daneker says.

Long-term side effects from various forms of cancer treatment have oftentimes been an unfortunate fact of life.
Dr. Matthew Ramirez, who is director of long-term oncology at Palm Beach Children’s Hospital, says his program serves as a follow-up center. “The main issue is screening for long-term side effects that can occur after the treatment pediatric cancer patients receive has ended,” he says.

Ramirez says screening is not necessarily limited to cancer survivors, but for “those who underwent any cancer-related type therapy. For example, immunodeficiency patients or bone marrow transplant patients have the same type of protocol.”

In view of today’s more targeted forms of treatment, Ramirez has seen some major changes in side effects. “As the therapy has been more tailored to a patient’s needs, we’re seeing fewer and less severe side effects,” he says.

Of course, with new forms of treatment –
including various new medications – the possibility arises that in the future, new side effects could emerge. “With the newer drugs coming out, we don’t know the future,” Ramirez says. “With long-term oncology follow up, we know we may be coming up with new side effects.”

Ramirez says long-term follow-up departments are now established in many medical centers. He says if he notices a new side effect here in Florida, he can report to his colleagues around the nation to see if they’ve made similar observations. “We have meetings every year on pediatric survivorship,” he says.

Dr. Archana Maini, a hematologist/oncologist at Broward Health Medical Center, sees immunotherapy as the current leader in all types of therapy. Today’s rapidly advancing technology has provided the medical community with the means to make this possible. “It’s a needed thing,” she says. “We already have the ammunition.”

Maini says only a small percentage of cancer is genetic in origin. “The majority is environmental, exposure to different toxins,” she says. “We don’t know what many of the stimuli are, but some are well-known and researched like cigarette smoking. We know of certain viruses that can cause cancer. We are still far from finding why some cancers occur.”

In regard to the rapid increase in the amount of cancer-treating drugs being made available and being approved by the FDA, she says: “I try to keep pace, but sometimes I’m surprised.”

She points to one particular – usually deadly – form of malignancy: multiple myeloma. “It starts in the bone marrow and spreads with no cure,” she says. “Then last year, in February, a brand-new drug was approved. And by November, another three drugs hit the market.”

Unfortunately, Ramirez says, most of the new cancer-fighting drugs are patented and approved to fight adult malignancies, not usually pediatric cases. He attributes this to occurrences of children’s cancer being comparatively small in number.

Another cutting-edge form of cancer treatment is proton therapy, a type of radiation treatment that uses protons rather than X-rays. A proton is a positively charged particle.

Dr. Minesh Mehta, deputy director of Baptist Health’s Miami Cancer Institute, says to target tumors, they need to maximize the radiation dose into the tumor while minimizing the dose to surrounding healthy tissue.

Pencil-beam proton technology is the most efficient modern form of proton treatment. “It allows unprecedented ability to increase the dosage to the tumor while decreasing the radiation dose to normal tissue,” Mehta says. “We now have an elegant opportunity to decrease the number of side effects.”

In the past, proton therapy was delivered as a broad beam, making it difficult to shape to tumors, which can be asymmetrical. Mehta says historically curative radiation therapy lasted five to eight weeks with a treatment every day, amounting to 25 to 40 treatments. “Consider the potential with the duration of treatment being reduced with proton therapy to maybe being done in a week or two,” Mehta says.

The number of medical facilities – though now increasing – with proton therapy equipment is still relatively small because of its high cost. Miami Cancer Institute is slated to have one available for use by either late summer or early fall 2017.

Dr. Luis Raez, medical director of Memorial Cancer Institute, also points to the many new cancer drugs that have hit the market in recent years. Unlike cancer treatment in years past, today’s treatments are becoming more and more engineered to fight specific tumors and leaving neighboring cells untouched. “It used to be like carpet bombing, you’d hit a large area, killing bad guys as well as good guys,” he says.

Now, doctors are able to use a targeted approach based on a tumor’s molecular profile. This approach hasn’t cured some cancers as yet, he says, but it has extended people’s lives and quality of life. “It’s a much more rational approach,” Raez says.

Raez sees promise for the future. In recent years, more than 30 types of oral agents have been approved for fighting cancer. “People can take the medication at home and not at the hospital undergoing chemotherapy,” he says, adding vaccinations and other methods of immunotherapy continue to be introduced. “We have to put the immune system back in charge.” ↵