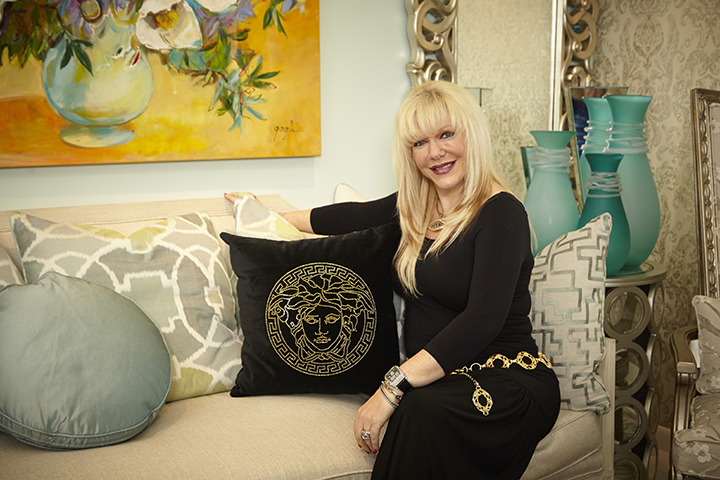 Many know Perla Lichi as a brand – a trademark opulent style and famed moniker in the South Florida design community. But, Perla Lichi the businesswoman offers entrepreneurial inspiration on how to turn local success into global success.

Lichi has branched out from an expanded hometown showroom in Coral Springs to a second jet-set location in Dubai. She continues to reap awards in South Florida, including Best of Show during the U.S. Florida Atlantic Building Association Prism Awards.

Known for her elegant, intricately-detailed interior designs, her projects include luxury condos across the states, palaces in the Middle East, and other properties across the globe. Many of these projects are illustrated in five of her self-published coffee table books – her most recent publication, “Palaces of the World,” was released earlier this year.

Celebrating her 30 years in the professional interior design industry, we took a moment to interview Lichi about her rise to international success.

How did you develop your trademark style and does it change you’re doing international designs?

Totally. I’d say it changes with my travels. The evolution of styles comes with travel and knowledge of how different people live. You can learn technique in school, but seeing different parts of the world is essential to understanding what has been done through the ages. That has inspired me to develop my own style by taking those elements and fusing them together and creating what people call the “Perla Lichi Style.”

Where else do you draw your inspiration from?

I can name a few artists who have inspired me. Leonardo Da Vinci shares my birthday and has such a versatile style of art, so that’s a sure thing. Gianni Versace. I’m currently working on featuring a Versace home in my showrooms. Erte – I’ve always loved his fashion, very theatrical. To me design should make a statement. – It has to show it was designed. When I look at a room, I don’t want it to look furnished. I want it to look designed.

How and why did you pursue opportunities in the international market?

They invited me. A company in Dubai had followed my work for years on the internet and approached me. They flew me over there and we agreed on an interior design label with a Perla Lichi label. We started working together and it was very well received. We tried Perla Lichi Domain for a year. Then decided to go full-blown as Perla Lichi Gallery in Dubai in 2009.

I opened my first showroom in Jumeirah, which started at 5,500 square feet. It displayed different vignettes of rooms. 2009 was the beginning of the crash in Dubai and everyone was panicking and leaving. Everyone was calling it a crisis. All the international designers left, but I thought, “I’m coming in.”

I was pretty much the only game in town. I got projects in the local market. The local people were still going to build and needed a designer and there I was. I partnered with Osama Salem in Dubai. He has his background in manufacturing and engineering. We wanted to manufacture everything in-house from window treatments to furniture. Between 2009 and 20011, I developed my Dubai business.

What was it like working simultaneously abroad and in the States?

I have eight designers with assistants in Dubai. Our showroom there is at a prime location at the H Hotel on the 33rd floor off Sheikh Zayed Road. That’s the main road of Dubai.

Have you ever been awestruck by someone you’ve worked for or vice versa?

I couldn’t care if I designed a condo for a nice lady for $50,000 or a $10 million palace for the princes of Dubai. To me it’s a design job and I’m an equal opportunity interior designer.

I had Scottie Pippen and his wife walk into my showroom in Coral Springs. My staff runs up to start talking to him. They sit down and I immediately focus my attention on the wife. Towards the end, I ask, “Is he like a football player or something? He looks really sporty?” She starts cracking up. “Scottie, Scottie! She thinks you are a football player!” Everyone brought basketballs to sign, and I said let him sign the contract first.

Tell us about yourself as a businesswoman?

I’m very straightforward – I tell it like it is. I’m very flexible, too, because every situation is different. There should be rules, there should be standards, but you have to listen to each client – what their needs are and how best to make both parties happy.

How do you measure your success?

What are some of the challenges of being a businesswoman in the Middle East?

There are many challenges because the Middle East is the Middle East. Being a woman, you have to behave a certain way. I’ve always dressed professionally even in the U.S. The same way I do here, I do over there.

In the Middle East when you are introducing yourself to a man you never extend your hand and you never hug. You can’t cross your legs when sitting. I studied culturally the behaviors of how to conduct myself there as a woman. How to sit, how to speak and how to dress.

What are some of your other challenges?

Just the jet lag. I have it down pat. I love it so much. I love the diversity of the cultures. I like the change – the best of both worlds. I run everything on my iPhone. Even with an eight hour difference there’s no issues, we’re in touch all the time. Both of my sons work at the Coral Springs office. Izzy, 25, does AutoCAD. Adam, 30, designs the layout of my books.

What projects are you currently working on?

My first project was at Palm in Dubai in 2007. They’ve now hired me to do the renovations there after seven years.

I’m also working on projects in the WCI and the Wedge area, as well as some renovations here in Coral Springs.

What advice do you have for other business people?

Don’t be afraid of expanding internationally. Everyone looks at websites from everywhere. Why not broaden your business? ?