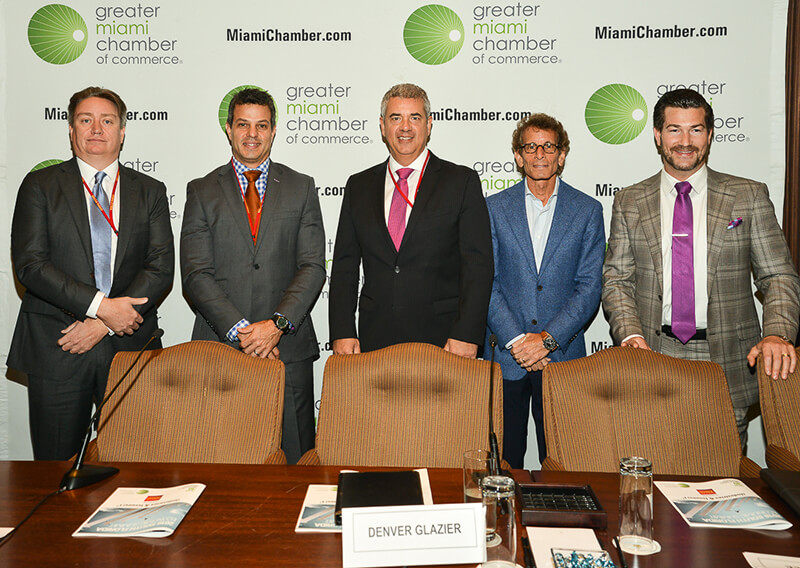 If you wonder what’s fueling the real estate growth in South Florida, look no further than the number of people moving here.

South Florida grew by 65,000 people in 2016, the latest year statistics are available, including 48,000 new residents from migration, census figures show.

That growth was one of the cornerstones of discussion during the South Florida Economic Summit, held by the Greater Miami Chamber of Commerce. The “Let’s Get Real Discussion” was moderated by Jacques Hart, co-founder and chief idea officer of Roar Media, who noted the population growth.

Christian Lee, vice chairman of CBRE, says the rule of thumb is that each new resident requires about 50 square feet of industrial space. That’s why industrial real estate is one of the hottest growth sectors in the region—along with the rise of companies such as Amazon. Industrial space is coveted by investors. So are prime residential and office space, while retail is a mixed bag.

Lee, who facilitates large transactions, says funds put together by investment bankers, pension funds, life insurance companies and endowments are all active in the region along with investment by wealthy individuals.

Multifamily continues to be strong, but investors are concerned about tenants’ ability to pay high rents going forward, Lee says.

Institutions are picky about locations, he says. Brickell Avenue and Las Olas Boulevard will generally get a “yes,” while Broward Boulevard and Miami Lakes are more likely to get a “no.”

Denver Glazier, Florida investment officer for Prologis, a logistics owner and developer with 15 million square feet in South Florida, says there’s no shortage of capital in the region across all product classes, particularly industrial.

Because Miami is one of the nation’s 10 gateway markets, investment offering packages typically gets 20 to 30 offers, Glazier says.

Brightline is adding another dynamic to the real estate scene

Lee says another type of investor prowling the market is value-add funds. They like to find underperforming property, turn it around and sell it in three years for a profit.

Stable real estate assets that aren’t Class A and shunned by institutional investors can provide opportunity for private investors, he says. They probably are getting better returns than anyone else in the market.

Despite some high-profile, big-box retailers collapsing, Stern says there are still some healthy growing tenants in that category. Retailers are asking whether they still need 10-year leases or seeking flexibility in case they need to shrink.

In general, successful retail has to be experiential.

“People don’t have to shop for a shirt the way they used to do,” Stern says. “They want to mix in experiences, like art and dining. Lincoln Road, Wynwood and the art-filled expansion of the Aventura Mall are prime examples.”

Suburban areas are going to be a little more competitive, with local retailers having a chance to expand as some retailers fall, he says.

John Guitar, managing director and vice chairman of Blanca Commercial Real Estate, says office tenants are concerned about attracting tenants, so access to mass transit can be important. It’s becoming too difficult to drive around town, he says.

Brightline, which is developing near its high-speed rail stations, has preleased 60 percent of its 300,000 square feet of space, he says.

Developers’ quest to build office spaces near population centers is spurring construction in places such as Coral Gables, Aventura, Wynwood and Coconut Grove, which is getting its first new office space in 13 years.

Office users also are increasing density and the number of people per square foot, which means more open floor plans and more collaborative space, he says. Buildings need have to have conference areas, communal areas, the right food and beverage offerings, and other amenities. A tiny gym tucked in the corner doesn’t cut it anymore, he says.